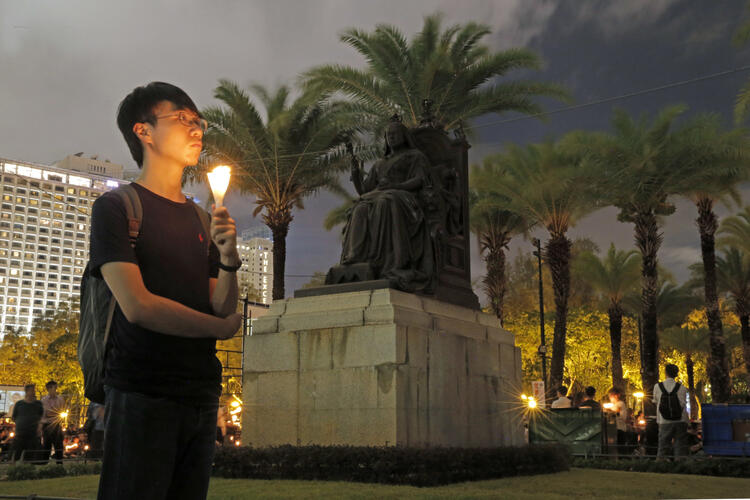 Thousands attended an annual candlelight vigil in Hong Kong on June 4 in Victoria Park, remembering the victims of the Tiananmen Square massacre in Beijing in 1989. (AP Photo/Kin Cheung)

When Joe Wong was looking for a kindergarten in Hong Kong for his toddler son, he was shocked to find that many boasted that they taught in English and Mandarin only—a phenomenon he found odd in a city where Cantonese is spoken by 90 percent of the population.

“They say they need to prepare the children for primary school entrance exams, which mostly test them in English and Mandarin,” said the exasperated 41-year-old accountant turned full-time parent.

Indeed, promoting Mandarin Chinese among Hong Kong students has been a political task for the Hong Kong government since 1997, when control of the former British colony was returned to China. The Hong Kong government launched a scheme 10 years ago to incentivize schools to use Mandarin instead of Cantonese in Chinese language classes and has spent 180 million in Hong Kong dollars ($23 million in U.S. currency) in assistance to schools since the effort began.

Simmering resentment over the promotion of Mandarin over Cantonese recently came to a boil when an article by a mainland Chinese scholar asserted that Cantonese could not be considered a mother tongue. The claim, seen as an attack on Hong Kong’s sense of identity, sparked an outcry.

Although the article had been posted on the Hong Kong Education Bureau’s website since 2013 as part of Mandarin teaching support materials provided to local primary schools, it only gained wide attention in May after it was circulated on social media. The article, by Song Xinqiao, a consultant at the Chinese University of Hong Kong’s Mandarin education research unit, asserted that the controversy surrounding Mandarin teaching in Hong Kong was caused by an inaccurate understanding of the concept of “mother tongue.”

“A dialect cannot be considered a ‘mother [tongue]’,” wrote the former official at China’s Ministry of Education and the State Language Commission. He asserted that since most Hong Kong people belong to the Han ethnicity, their mother tongue “should be the hanyu (Chinese).”

But Cantonese and languages spoken in southern China such as Hakka and Min are in fact regarded as languages rather than dialects by linguists, said Stephen Matthews, a linguistics professor at the University of Hong Kong. And since a “mother tongue” is the first language that a child hears from his or her mother, “it does not make sense to consider written Chinese as the mother tongue of a Cantonese speaker,” said Mr. Matthews.

“For most Hong Kong children [the mother tongue] is Cantonese, with a grammar and vocabulary quite different from those of written Chinese,” he said.

Spoken Cantonese and Mandarin are not mutually intelligible and differ not only in pronunciation but also in grammar to a certain degree. Cantonese is primarily used for spoken communication and although it can be written down, the written form is used only in informal contexts. Formal written communication in the Chinese diaspora is considered acceptable only in the Mandarin-based standard written Chinese.

But Cantonese, also spoken throughout the neighboring Chinese southern province of Guangdong and widely spoken in the Chinese diaspora abroad, is an inseparable part of Hong Kong’s identity. And that sense of identity has been growing amid Hong Kong’s escalating tensions with mainland China.

Mr. Song’s article prompted a huge backlash from many Hong Kong people who fear the government’s promotion of Mandarin is just another step in the local authorities’ wider efforts, following Beijing’s lead, to suppress Hong Kong’s unique culture and values.

Online posts proclaiming: “Cantonese is my mother tongue!” spread like wildfire on social media, and many expressed anger at the marginalization of Cantonese in Hong Kong under Chinese rule.

“I am a Hong Konger and Cantonese is our mother tongue. When we see it deliberately trampled on, we must protect our heritage,” said a user named Elaine Wong on Facebook. “Cantonese mustn’t disappear!”

“When authorities want to destroy a place’s culture, they start with language,” Joe Wong said. “I think the trend is to deliberately suppress Cantonese and is yet another step to ‘mainlandize’ Hong Kong and get rid of our unique identity.”

“Mainlandization”—efforts by the Chinese government to exert greater control over Hong Kong and to integrate it into the mainland—has been haunting Hong Kong people since the change of sovereignty in 1997, even though the “one country, two systems” pledge was supposed to keep the city’s way of life unchanged for 50 years. Twenty-one years on, China’s presence looms larger than ever, and every aspect of life in Hong Kong seems to be controlled and influenced one way or another by Beijing.

The Hong Kong government has been tasked with instilling a sense of Chinese patriotism among Hong Kong people since the handover. Patriotic education has been seeping into the general school curriculum since 1997, with schools required to hold regular flag-raising ceremonies and Chinese textbooks drumming in the message: “I am Chinese,” extolling the achievements of China and glossing over the darker elements of its history.

In 2012, the Hong Kong government tried to introduce “national education” classes in schools, with a curriculum depicting the one-party Communist regime as “progressive, selfless and united” while multiparty democracy was described as inferior because “malicious fights between political parties lead to people’s suffering.” The plan was shelved after a huge outcry, but mainland officials continued to criticize the Hong Kong people's lack of patriotism and pressured officials to strengthen national education.

To add to Hong Kong’s anxiety, China’s parliament formally extended a law banning disrespect of the national anthem to cover Hong Kong last year. Beijing has also been pushing Hong Kong to enact a controversial subversion law, which would give broader powers to authorities to curtail the freedom of expression.

“I am a Hong Konger and Cantonese is our mother tongue. When we see it deliberately trampled on, we must protect our heritage.”

Whatever Beijing’s ultimate intentions, linguists point out that the real threat to Cantonese comes from Hong Kong’s parents. Most speak Cantonese as their first language and have emotional ties to it but because written Cantonese never had an official status, people see it as a useless oral language that does not help advance career prospects. In recent years, many parents have even abandoned speaking to their children in Cantonese and instead speak to them in English or Mandarin.

Lau Chaak-ming is a former lecturer in Cantonese at the University of Hong Kong and the founder of an online Cantonese dictionary project words.hk. “The government might step up the push for the lingua franca and suppress regional languages, or abandon them in education to limit their domain and reduce their vitality,” he said, “[but] when parents believe their own language is of a low status and start using another one instead, that is the real threat to a language.”

There may be no imminent threat to Cantonese—the Cantonese diaspora includes some 63 million speakers. But Mr. Matthews said the language was “vulnerable” in Hong Kong and “threatened” in Guangdong Province, according to the recently developed Language Endangerment Index, because people are not wholly passing it on to the next generation.

That language shift is already evident in mainland Guangdong Province, where the use of Cantonese is banned at schools and many parents choose to talk to their children in Mandarin. Television broadcasts in Cantonese have been greatly reduced in recent years on government orders.

Mr. Matthews said the language’s survival depends on “whether Hong Kong people have a sufficiently strong attachment to Cantonese as an aspect of their identity.”

He said most Hong Kong people, having long been educated in standard written Chinese, look down on literature written in Cantonese, and parents’ emotional attachment to Cantonese often conflicts with their hopes for their children to go to the “best” schools, some of which are even banning the use of Cantonese on the playground.

Groups dedicated to the plight of Cantonese have emerged in recent years, and one—a group called Societas Linguistica Hongkongensis—is dedicated to defending Cantonese and monitoring the government's language policy.

Mr. Matthews believes the extinction of Cantonese is “likely to happen” over several generations although he said it is “not inevitable.” Other languages have been brought back from the brink.

Welsh, for example, has long been under threat, but the Welsh government intervened by imposing compulsory Welsh lessons in schools since the 1990s and offering financial incentives for teachers who can use Welsh as a medium of instruction.

But unless there is a determined top-down drive to save Cantonese, which appears unlikely, the fate of Cantonese seems unlikely to be reversed.

Asked by a lawmaker what her mother tongue was in a legislative session in early May, Chief Executive of Hong Kong Carrie Lam snapped: "I won’t respond to silly questions."

Chan Kin Man, a sociology professor at the Chinese University of Hong Kong, said the Hong Kong government’s political order to promote Mandarin and its failure to defend Cantonese has fueled the Hong Kong people’s feeling of helplessness under Chinese rule and could make its governance of Hong Kong even more difficult.

“People feel the officials are just carrying out Beijing’s orders and are selling out on Hong Kong’s interests,” he said. “They will not trust the government and we will only see more confrontations.”

Is a ruthless monolithic corporation that will squash all dissent in
Hong Kong or anywhere else in the world where it has the power to do so.

Mandarin is the way of the future.
All the young people throughout the world
should start learning it.