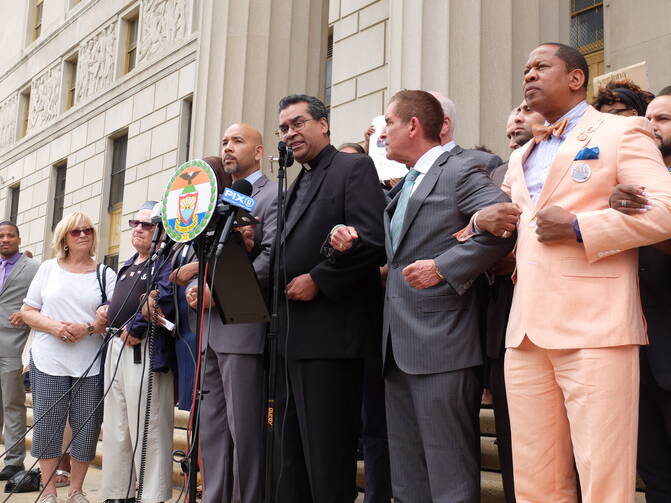 Father Eric Cruz still has dried mud on his shoes from his visit to the Texas border.

Father Cruz, who serves as the Bronx regional director of Catholic Charities New York, traveled along with faith leaders from across the country to McAllen, Tex., where they met with separated families along the U.S.-Mexico border.

“It was pouring rain in Texas the last four days,” Father Cruz said, recalling how during a flash-flood the group made it to a Catholic Charities respite center that shelters immigrants released from Border Patrol custody.

“We met with some families there; fathers separated from wives, four and five-year-olds asking for mommy,” he recalled. “The worst part was hearing the fear and separation anxiety. The driving force that kept them together was the love and power of family. Now, that has been divided.”

Father Cruz says that not only are migrants the primary victims in need of prayer. So are those who enforce the current policies.

Father Cruz, the pastor at St. John Chrysostom Parish in the Bronx, says that not only are migrants the primary victims in need of prayer. So are those who enforce the current policies, who also have families to feed and care for. He remembers speaking with one Immigration and Customs Enforcement officer along the road, who was in “anguish” from having to explain his work clearly to his children.

“You can see in them the suppressed anxiety and suffering of having to perform this. It’s collateral damage,” he told America. “We tend to look at the emotional-spiritual impact it has on the most immediate victims, the migrants, but we also need to pray for the prison and border guards and their families, law enforcement officials who are fulfilling an obligation.”

For Catholics who are morally or politically struggling with the issue, Father Cruz says to look to our own family and biblical histories, at their migration stories.

“Pray for justice, remembering the Beatitudes and the Corporal Works of Mercy—welcoming the stranger,” he said. “Take a look at what your local church leaders, organizations are doing.”

Organizations like Catholic Charities have been at the forefront of the border crisis, helping migrants and refugees with shelter and basic necessities, as well as legal support.

Organizations like Catholic Charities have been at the forefront of the border crisis.

Responding to the needs of the most vulnerable is Catholic Charities of the Rio Grande Valley. There, volunteers and Amazon-shipped donations have surged in the past few days. The organization’s Humanitarian Respite Center, in the Diocese of Brownsville, provides migrants with a comfortable place to rest along the journey and continues to fundraise to help with costs.

Sister Norma Pimentel, the group’s executive director, told America last year that she was heartbroken seeing children “in conditions where they are detained like criminals.”

“[People fear] that immigrants are going to take our jobs or money, but they come to contribute, to make our economy better, to really enrich us because many of them come with great hopes of working and making a difference in their lives,” she said.

Sister Pimentel’s work has helped restore dignity to thousands of migrants along the journey. But even with an executive order that promises to reunite families, the fight for justice is far from over.

In New York, news of at least 700 migrant children who have reportedly been relocated from the southern Mexican border to New York State—thousands of miles from their parents—has caused widespread outrage and action.

Bronx borough president Ruben Diaz Jr. said that his office is monitoring the situation and is working with church-based agencies alongside Catholic Charities, including Catholic Guardian Services and Lutheran Social Services of New York. These organizations are contracted by the U.S. government “to provide services for unaccompanied minors” and are privately housing them, he said.

Catholic Charities New York agencies have received at least 16 unaccompanied children, as young as 8 years old, with more reportedly on the way.

“I have been assured by leadership at both organizations that these children are receiving the best possible care. They are not in prisons. They are going to school, receiving medical and counseling services, and are afforded legal representation in immigration court where appropriate,” Mr. Diaz said in a statement. “Given the sensitive nature of the current situation, as well as the need to protect these children from unwanted attention, the organizations will not disclose the locations where these children are being housed.”

According to Father Cruz, Catholic Charities New York agencies have received at least 16 unaccompanied children, as young as 8 years old, with more reportedly on the way.

“It’s been an overwhelming response, but we will continue to serve [kids] as long as necessary...to gain their trust, welcome them,” he said. “Each child has their own rhythm. But the goal is always reunion.”

On June 22, Father Cruz was joined by other New York religious leaders and elected officials—including Mr. Diaz., Congressman Joseph Crowley, Public Advocate Letitia James, state senators and councilmembers—as well as undocumented immigrant advocates, on the steps of the Bronx County Building to call for the immediate reunification of families.

Together, as people of different parties, races and faiths, they prayed for God to change anti-human rights policies, and the hearts of those who enforce them.

“It doesn’t matter how you worship, who you worship to; we all know there is another authority, higher than all of us,” said Mr. Diaz. “We are here because of a humanitarian crisis orchestrated by our President to address a stain on the nation’s soul; one that may never be removed or washed away.”

Together, as people of different parties, races and faiths, they prayed for God to change anti-human rights policies, and the hearts of those who enforce them.

New York Senator Jeff Klein added that many immigrants, including his own Jewish family, came to the United States to flee national or religious persecution—today’s immigrants are no different.

An impassioned Pastor-Bishop Angelo Rosario of the Church of God’s Children, also CEO of the Bronx Clergy Task Force, claimed that separation “is an abomination before the breath of God.”

“There are no borders in the presence of a living God; who is a Muslim, a Jew, a Christian. He is the Father of all men, because we are made in his image and likeness,” Rev. Rosario said. “Yes, I am a Democrat, but I am a child of God before that.”

Public Advocate Letitia James agreed: “There is nothing in the Bible, Talmud, or Quran that justifies this action. For anyone to cite the Bible; there is nothing about religion that supports this. How can we, as people of conscience, respond to the cries of these babies?”

At the end of the rally, faith and political leaders interlocked arms and sang the gospel hymn “We Shall Overcome,” with a final prayer led by Father Cruz.

“It transcends any ideological, theological, and personal opinions...one thing we all have in common is that we have a dignity and respect that comes from an Almighty; that separates us from everything else on this planet, and especially gives us a responsibility,” Father Cruz said afterward. “It fosters a true sense of love and empathy, and the ability to feel what our brothers and sisters are enduring. That’s the profound, continuing breaking open of love.”

While people can always donate money and resources through Catholic Charities, the best response for all people of faith, Father Cruz said, is to simply love and accompany all immigrants.

He also called on parishes and the clergy to talk about the issue at Mass, in community, to engage the faithful in understanding and working toward social justice.

“It’s not a political act, it’s a moral act, as a Christian. The reality is, we don’t truly understand...that’s why I kept the [muddy shoe] stains, because we don’t know unless we walk their road, in their footsteps,” he continued. “If it is not us now, making a stand and speaking loudly, then when? If it is not us, then who?”

Is this another call for open borders without saying so? What is the official immigration policy of the Catholic Church? What are the current laws and what have they to do with what is going on?

Quote "A month from now there will be a new manufactured news story that Donald Trump is savage, represents an existential danger, or is unhinged. We will hear of another Trump official cornered and driven out from a liberal-owned Beltway or New York City restaurant. An unhinged Rep. Maxine Waters (D-Calif.) will rant some more about impeachment. And then the current hysteria over the border detainments will be filed, and go the way of the “s—hole countries” frenzy or Melania’s jacket melodrama"

What will the author say about all the other separations of children from their parents?
Do men and women with children who are incarcerated after due process - charged, tried, found guilty and imprisoned - have their children imprisoned with them?

What about custody and access determinations which take children from their mother or their father or from both of them?

Contrary to the political use of vague bible teaching, you will find very strong and frequent attention being given to law, nations, boundaries and transition from one to the other.
Law belongs to God, lawlessness is not recommended - you folk living in the USA are not living in Utopia and your civilisation is not invulnerable. Some people entering your territory are invaders and need to be guarded against. This is a job for your Caesar obeying the will of those who established him in it.

Allyson,
Please simply google “ homicide by country wiki”....then google the murder rate for Newark, Detroit, Bronx, poor parts of any major city. Bolivia and Peru and Ecuador are far safer destinations for people fleeing the murder rates of El Salvador and Honduras than the poorer areas of the USA. Safety of their spouses and children cannot be the motive when usa poor areas have 20-31 per 100,000 murder rates while Peru, Bolivia and Ecuador are in the 5-7’s per 100,000. The US Bishops unthinkingly are getting poor people killed just for the group think thrill attached to
the feeling.....” I’m not Trump”. Please do the reading. Kirkegaard...” a crowd is untruth”. Google also the murder of Mr. Yupa of the 800 block of Irvington N.J. A thug shot him in the head in front of his house,wife,and child...for not handing over his wallet. His Ecuador has a murder rate 4 times lower than that border of Newark/Irvington. Now a young widow moves in with her sisters loses her man, her apartment, her child’s father...for what....so that they by his construction work could afford a nice car? This group think has little analysis going on within it. Maybe it’s group urge.