Listen to those in need, pope says in World Day of Poor message

Listen to those in need, pope says in World Day of Poor message 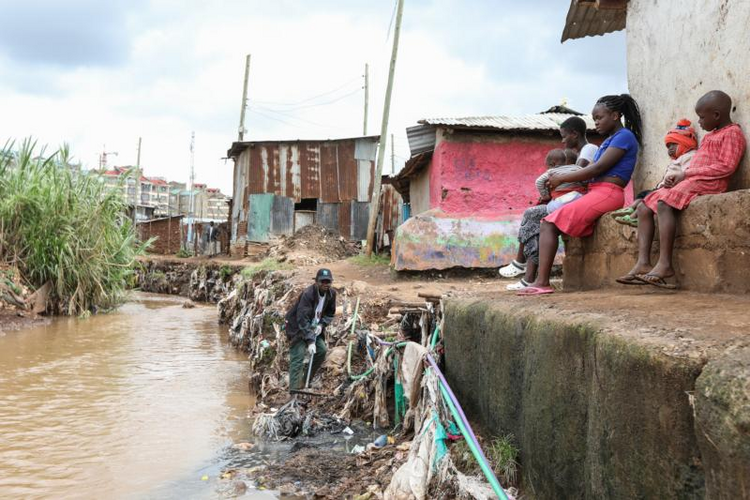 Women and children sit next to a river bank in Kibera near Nairobi, Kenya, May 25. The World Day of the Poor -- to be marked each year on the 33rd Sunday of ordinary time -- will be celebrated Nov. 18. (CNS photo/Daniel Irungu, EPA)

VATICAN CITY (CNS) -- How is it that God in heaven can hear the cries of the poor, but so many people watching or standing nearby either cannot or just do not care, Pope Francis asked.

People must make "a serious examination of conscience to understand whether we are really capable of listening to the poor," the pope said in a message for the World Day of the Poor.

The recently established commemoration and the period of reflection and action preceding it are meant to give Christians a chance to follow Christ's example and concretely share a moment of love, hope and respect together with those in need in one's community, the pope said in the message dated June 13, the feast of St. Anthony of Padua, patron saint of the poor. The Vatican released the message to the public June 14.

The World Day of the Poor -- to be marked each year on the 33rd Sunday of ordinary time -- will be celebrated Nov. 18 this year and will focus on a verse from Psalm 34, "This poor one cried out and the Lord heard."

"We can ask ourselves, how is it this cry, which reaches all the way to God, is unable to penetrate our ears and leaves us indifferent and impassive?" the pope asked in his message.

To become aware of people's suffering and know how best to respond with love, people must learn to be silent and listen, the pope said.

"If we speak too much ourselves, we will be unable to hear them," he said.

That is often what happens when otherwise important and needed initiatives are carried out more as a way to please oneself "than to really acknowledge the cry of the poor," he said.

"We are so entrapped in a culture which forces us to look in the mirror" and unduly "pamper ourselves," he said. Such people come to believe their act of altruism is enough without having to feel any empathy or the need to sacrifice or "endanger" themselves directly.

Nobody seeks poverty or its many forms, which include marginalization, persecution and injustice, the pope said.

Poverty "is caused by selfishness, pride, greed and injustice. These are evils as old as humanity, but also sins in which the innocents are caught up, leading to consequences on the social level, which are dramatic," he said.

"God's answer to the poor is always an intervention of salvation in order to heal the wounds of body and soul, restore justice and assist in beginning anew to live life with dignity. God's answer is also an appeal in order that those who believe in him can do the same," he added.

The World Day of the Poor is meant to be a small contribution that the whole church can make so the poor may know their cries have not gone unheard, the pope said in his message.

"It is like a drop of water in the desert of poverty; and yet it can be a sign of sharing for those who are in need, that they might experience the active presence of a brother or a sister," he said.

This encounter is a call for personal involvement, not delegation to others, he said. And it is not cold, distant giving, but an act that requires "loving attentiveness" just like God offers everyone.

People must make "a serious examination of conscience to understand whether we are really capable of listening to the poor," the pope said in a message for the World Day of the Poor.

So many people in need are seeking the meaning of their existence and a response to their questions about "why they have fallen so far and how they can escape! They are waiting from someone to come up and say, 'Take heart; rise, he is calling you,'" the pope said.

Unfortunately, people are often repelled by, not drawn to the poor, he said. The cries of the poor are often met with rebuke and they are told, "to shut up and put up."

There is a real "phobia of the poor," who are seen not only as destitute, but also as carriers of "insecurity and instability," to be rejected and kept afar.

But this tendency to create a distance means people distance themselves from Jesus himself, "who does not reject the poor, but calls them to him and consoles them," he said.

Even though members of the Catholic Church who offer their care and assistance are motivated by their faith and the desire to share the Good News with others, he said bishops, priests, religious and lay Catholics should recognize that "in the immense world of poverty, our capacity for action is limited, weak and insufficient."

The church should cooperate with others so joint efforts can reach their objectives more effectively, he said.

The church should give freely with an attitude of humility, "without seeking the limelight," he said.

"In serving the poor, the last thing we need is a battle for first place," he said. The poor don't need heroes, but a love which knows how to remain hidden from worldly recognition, he said.

"The true protagonists are the Lord and the poor," and those who serve are mere instruments "in God's hands in order to make manifest his presence and salvation."

Archbishop Rino Fisichella, president of Pontifical Council for Promoting New Evangelization, told reporters the pope hopes the day will remind everyone in the church to turn their gaze to the poor, truly listen to their needs and respond directly with love in a way that aims to restore their dignity.

The archbishop said the pope will celebrate Mass in St. Peter's Basilica Nov. 18 with the poor and volunteers, and he will have lunch afterward with about 3,000 people in the Vatican's Paul VI audience hall. Other volunteer groups and schools were also set to offer free meals in an atmosphere of "celebration and sharing," he added.

Medical tents and mobile clinics will again be set up in the square adjoining St. Peter's Square Nov. 12-18, with extended evening hours until midnight for some services, he said. Anyone in need can find general and specialist care, including cardiology, dermatology, gynecology and ophthalmology.