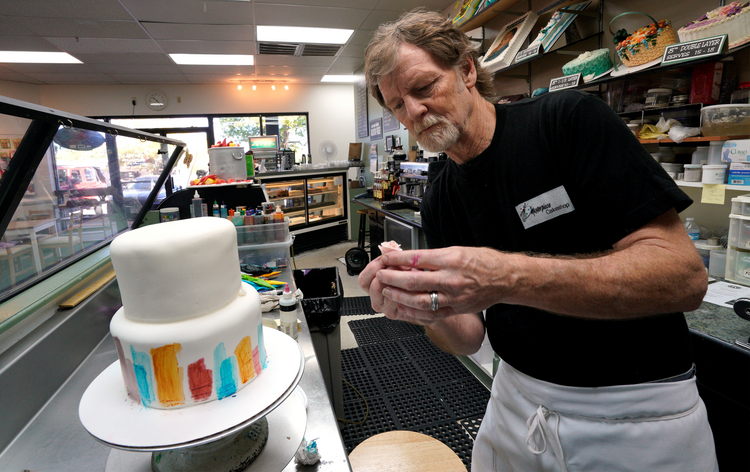 Baker Jack Phillips decorates a cake in his Masterpiece Cakeshop Sept. 21 in Lakewood, Colo. The Supreme Court was set to hear oral arguments Dec. 5 in the case of the baker who cited religious freedom in his refusal to design a wedding cake for a same-sex couple. (CNS photo/Rick Wilking, Reuters)

WASHINGTON (AP) — The Supreme Court is setting aside a Colorado court ruling against a baker who wouldn't make a wedding cake for a same-sex couple. But the court is not deciding the big issue in the case, whether a business can refuse to serve gay and lesbian people.

I came out as a gay, Catholic priest on the Feast of the Annunciation
Fred Daley

Justice Anthony Kennedy says in his majority opinion that the issue "must await further elaboration." Appeals in similar cases are pending, including one at the Supreme Court from a florist who didn't want to provide flowers for a same-sex wedding.

But the court is not deciding the big issue in the case, whether a business can refuse to serve gay and lesbian people.

All those people refusing to serve people wearing a pro Trump hat or T shirt will be under scrutiny.

Speaking from the chair of natural law, there was no moral or legal reasons for the two Justices, Ginsberg and Sodameyer, to vote against the majority on the Supreme Court.
/geo ex cathedra

The SCOTUS does not understand the 'accommodation' law, sexual orientations and homosexuality, period.

Why anyone would want to force someone to have anything to
do with their "Wedding" when they don't believe that they can
be married - baffles me.

That one can live out what one's conscience dictates in a non-violent
way is the reason we have the First Amendment. Why can't younger folks see the wisdom in the most fundamental of our amendments ?

Indeed.
If you're selling services or custom goods where you would need to participate in activities you find objectionable on the grounds of Christian conscience, it is perfectly moral and legal to decline the job... (Of course you're risking all sorts of bad press, but did Christ ever preach that Christian conscience is popular?)