A demand for a papal apology roils Canada 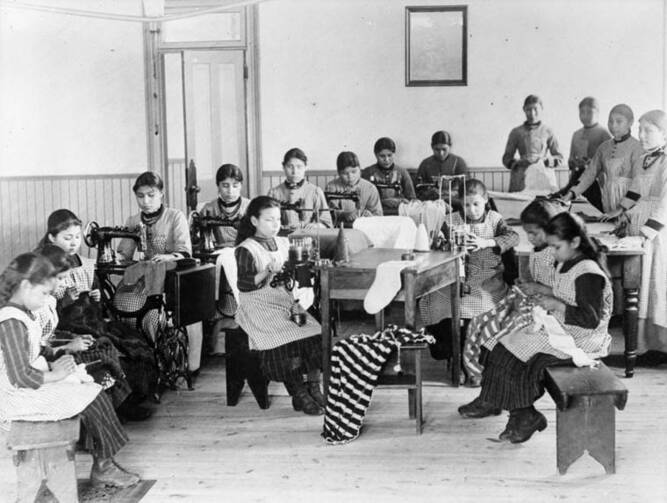 An Indian Residential school run by the church in the Northwest Territories, year unknown. Credit: Canada. Dept. of Mines and Technical Surveys / Library and Archives Canada

Confusion over whether or not Pope Francis will deliver an apology to indigenous peoples in Canada has put the Canadian Conference of Catholic Bishops at the center of public controversy.

When Canada’s Truth and Reconciliation Commission ended in 2015, the commission produced 94 “calls to action,” some of which address Christians in Canada specifically. “Call 58” asks that the pope deliver an apology to indigenous people on Canadian soil.

In a letter to indigenous peoples released on March 27, however, the nation’s bishops’ conference said, “After carefully considering the request and extensive dialogue with the Bishops of Canada, [Pope Francis] felt that he could not personally respond” to call 58.

The calls to action emerged after the Truth and Reconciliation Commission recorded stories from survivors of residential schools, institutions that it found were designed to alienate indigenous children from their cultures and heritage to “kill the Indian in the child,” assimilating indigenous people into settler society. Up to 60 percent of the schools were run by the Catholic Church, and the commission found that an indigenous child was more likely to die in a residential school than a Canadian soldier in World War II. The calls to action were issued to redress the effects of these schools and advance reconciliation in Canada.

"A future Papal visit to Canada may be considered, taking into account all circumstances, and including an encounter with the Indigenous Peoples as a top priority.”

The letter to indigenous peoples goes on to say “a future Papal visit to Canada may be considered, taking into account all circumstances, and including an encounter with the Indigenous Peoples as a top priority.” It does not say this encounter would mean an apology along the lines of call 58, which uses Pope Benedict XVI’s 2010 apology to Irish victims of sexual abuse as an example.

Ambiguities in the letter prompted a flurry of reactions. Many indigenous leaders and survivors of residential schools spoke out with anger and disappointment, recalling the horrors of the schools, where many experienced sexual and physical abuse. Some bishops echoed their disappointment, like Bishop Mark Hagemoen of Saskatoon and Bishop Jon Hansen of Mackenzie-Fort Smith.

Responding to the letter, two members of the New Democratic Party, Charlie Angus and Romeo Saganash, wrote a motion calling on the C.C.C.B. to ask Pope Francis to come to Canada and apologize. The Liberal Party supported the motion, but it was defeated by a small number of Conservatives. Missing unanimity, the motion was brought back for “historic” debate on April 26, and a vote is expected next week.

In light of the motion, the C.C.C.B. sent a letter to parliamentarians attempting to clarify the first letter and “errors” of interpretation. That gesture was followed by a heated press conference where Bishops Lionel Gendron and Richard Gagnon, president and vice president of the bishops’ conference, fielded questions.

The letter to parliamentarians and the news conference prompted further complications. Phil Fontaine, former national chief of the Assembly of First Nations (A.F.N.), said his words were taken out of context in the letter. It quotes Mr. Fontaine saying his visit with Pope Benedict XVI at the Vatican in 2009 would “close the book” on apologies to residential school survivors in Canada. Mr. Fontaine added that his visit with Pope Benedict was prior to further revelations uncovered by the reconciliation commission, including the deaths of thousands of children in residential schools.

Journalists also asked bishops for details on the possibility of a papal apology and wondered whether the C.C.C.B. would acknowledge any responsibility for what happened in the residential schools. In their letter to parliamentarians, bishops seemed to deny such an obligation, saying only 16 out 61 dioceses and about three dozen Catholic institutes were associated with residential schools.

According to the letter, Pope Francis has already been invited to apologize in Canada by Prime Minister Justin Trudeau and the Canadian bishops, “individually and collectively,” specifically with reference to call 58.

“I think there has been sufficient clarity, even though the press would keep pushing it,” Archbishop Gagnon told America. “They basically want to know if the pope will apologize and when. Our response to them is that there’s no door closed. I can’t speak for the pope or say he’ll say exactly this or that, but the mere fact that he remains open to considering coming to Canada should be sufficient.”

“I can’t speak for the pope or say he’ll say exactly this or that, but the mere fact that he remains open to considering coming to Canada should be sufficient.”

Though Pope Francis apologized for the actions of the Catholic Church during the colonization of the Americas during his visit to Bolivia in 2015, many indigenous people and Canadian Catholics still see an apology on Canadian soil as an important step in the reconciliation process. Archbishop Gagnon says that he does not think an apology is an “absolute necessity” for reconciliation, but “it would be helpful in the process of reconciliation, and the pope would probably agree with that, I would think.”

Much of the confusion has to do with the wording in the letter to indigenous peoples, specifically that Pope Francis cannot “personally respond” to call 58. Archbishop Gagnon underlines that the letter has to do with call 58 specifically, which gave a one year timeframe for a papal apology.

“Already the year has passed. The pope is saying he can’t personally respond to that, but in the same breath he says he remains open to coming at an opportune time,” which would have to be determined with respect to Pope Francis’ other international commitments, travel schedule and logistics in Canada.

In the meantime, Archbishop Gagnon says working for reconciliation will continue to happen at the local level and says the pope has a heart for indigenous people, something he saw during the Canadian bishops’ ad limina visits to the Vatican last year. For his part, Archbishop Gagnon says that, given Pope Francis’ history and record with indigenous people around the world, an apology would not be surprising.

“Making apologies is not a difficult thing for the pope to do,” he said. “If the pope listens to a group of aboriginal people in Canada, to their story, what do you think he’s going to say to them?”

That rhetorical question, however, is not so clearly answered by many in Canada, who have been campaigning for a papal apology on Canadian soil and remain frustrated by a lack of firm commitment and the bishops’ attempts to clarify.

Mr. Saganash says he was disappointed by the first letter, but was “disgusted” by the response of the hierarchy following. Senator Murray Sinclair, who served as commissioner during the Truth and Reconciliation Commission, said the Catholic Church itself, and not decentralized entities as the bishops claimed in the press conference, bears responsibility for the residential schools. “Everybody who worked for those entities was directed by the church on what to do,” said Mr. Sinclair. Documents seized by police from the Oblates of Mary Immaculate in 1995 show some in the Catholic hierarchy tried to influence public policy at the height of the residential schools’ impact on Canadian society.

Regardless of how the pope or the C.C.C.B. feels about the logistics of the apology, the politics surrounding it are anything but finished. In addition to the debate of the parliamentary motion, the Indigenous Relations Minister Carolyn Bennett said the Liberal government will continue to push for an apology. Current A.F.N. national chief Perry Bellegarde will seek an audience with the C.C.C.B. and Pope Francis.

Archbishop Gagnon says much of the national conversation feels to him like “political maneuvering,” adding that at that level there is “a real kind of breakdown” with the church, indigenous leaders and members of parliament. “At the local level, it’s different,” he says.

Whether or not the local level can reconcile Canada’s collective Catholic and indigenous communities remains to be seen.

He should apologize. I cynical about apologies without $$ (Bill Clinton apologized a lot, but never with money.)

Yeah, an apology is the least he can and should do. I think the Jesuits and other religious orders that committed these atrocities against the indigenous people in Canada should hand over their luxurious Villas and estates that they own. The Vatican Bank probably has a few dollars laying around, as well.

I take it that the Queen of England, the Canadian government, all local governments, the Protestant churches, the Canadian military, and all people of European descent in Canada, including Trudeau, have already extended their apologies to the descendants of the indigenous peoples of Canada.

Previous Popes have expressed their personal regrets, almost apologies, for the role of the church(es) in the residential school debacle, where church people were de facto agents of the state in a program of assimilation and cultural genocide ("to take the Indian out of the child"). The Pope today is caught between a rock and a hard place, regardless of his personal inclination which is known because of his clear apologies elsewhere, the CCCB (Catholic bishops of Canada) are not of one mind on the issue. For a number of reasons they do not want the pope to come. One simple factor is that the last visit of JP2 left a deficit of $30million, even after the sales of many rosaries and scapulars. Another is that the Catholic church escaped reparation payments, as has been paid by other Christian denominations. Could an apology lead to more demands for compensation? A majority of the Canadian bishops are the legacy of JP2, chosen not for their commitment to social justice but more for their more traditional "pelvic theology". It is unlikely that Francis would come to Canada without the support of the national conference of bishops. Going further perhaps, what is needed is not an apology for the singular issue of residential schools, but a papal statement on the fundamental errors of religious colonialism, the imposition of Christianity by the force of the sword and government policies, and the clearly evil "Doctrine of Discovery". Residential schools is just one chapter of this sordid imposition by the church that was so far from the message of Jesus, one who certainly knew all about the evils of imperialism and the rampages of the soldiers and priests of the empire.