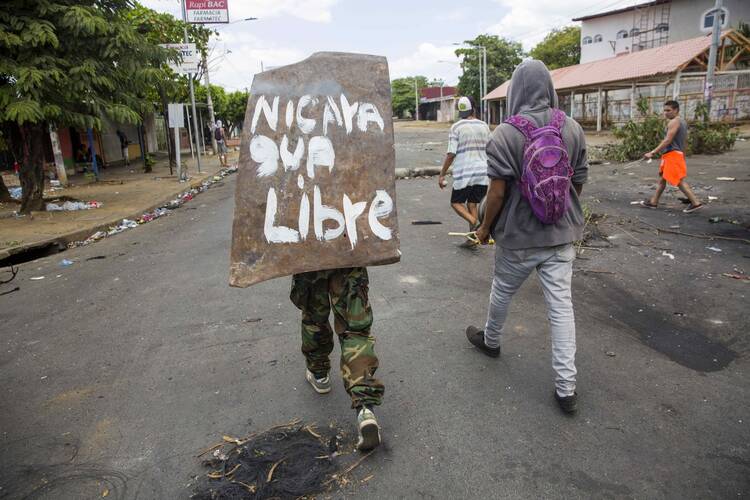 A woman in Managua, Nicaragua, walks with a shield on her back on April 22 that reads "Free Nicaragua." Pope Francis called for an end to violence in Nicaragua after several days of protests against proposed social security legislation led to the deaths of more than two dozen people. (CNS photo/Jorge Torres, EPA)

I arrived at Santo Domingo, the Jesuit church in Managua, Nicaragua, just before the funeral Mass began. It was standing room only. Searching for a seat, I spotted some fellow Jesuits, and they made room for me in the pew.

We were seated behind two rows packed with students from Instituto Loyola (a Jesuit school in Managua). They were embracing each other and sobbing. Their friend and classmate Álvaro Manuel Conrado Dávila had been killed during a peaceful protest the day before. We were gathered for his funeral to celebrate his life and mourn his tragic death.

Mr. Conrado was shot in the throat by police at close range with a rubber bullet. How did it come to that?

In November 2016, as Donald Trump was shocking the world by winning the White House, another national election happened the same week in Nicaragua. Daniel Ortega had changed the constitution to run for a third consecutive term as president and even chose his wife, Rosario Murillo, as his vice presidential running mate. The name Ortega might ring a bell. It was a household name in the 1980s when the Sandinista Revolution and the Iran-Contra scandal were nightly news stories. The same Daniel Ortega, the socialist leader of Nicaragua in the 1980s, had morphed into a democratically elected president in the mid-2000s.

With no viable opposition candidate in 2016, the Nicaraguan people, frustrated by the corruption of the new Ortega regime but preferring peace to rebellion, mostly chose to stay home and not vote. Mr. Ortega won handily with barely a whimper of protest. Five more years.

When Mr. Ortega announced social security reforms on April 17, it was assumed that people would be upset. Social security, after all, affects everyone. Workers would lose more of their salaries; employers would pay more to the state; and retirees would lose 5 percent of their pensions. But how much of a protest could we really expect? Peace is better than rebellion, right?

The following day, students from several universities organized small protests against the social security reform. The government, looking to spin the story their own way, organized rallies of loyalists to praise Mr. Ortega’s plan. In the evening darkness, the two groups clashed in front of the Universidad Centroamericana (U.C.A.), the Jesuit university of Nicaragua. Shouting and shoving turned into throwing rocks and bottles. The situation was broken up quickly, but something changed that night.

Through the courage and fearlessness of the youth, the people of Nicaragua have woken up.

By the next day, student protests erupted at multiple universities, including three public universities generally known for being sympathizers to the Ortega regime. Police were deployed in riot gear and began launching tear gas into the crowds and firing rubber bullets. Students wrapped bandanas around their faces to block the tear gas and fought off the riot police by throwing rocks and erecting barricades in the streets. Members of the Juventud Sandinista, the youth movement of Ortega loyalists, were also summoned to the streets and attacked the student protesters under the complacent watch of the police. The clashes spilled over to Friday.

Enter Álvaro Manuel Conrado Dávila. He was with his dad on Friday at Metrocentro, a local shopping mall in Managua, while the protests were carrying on outside. He ventured out to check out the crowd. Suddenly a rubber bullet struck his throat at close range, and he fell to the ground. He was rushed to the hospital, but the first two public hospitals denied him entrance under instructions to not admit student protesters. An hour after being shot, he arrived at a private hospital that admitted him. It was too late. He died on the surgery table. A senseless loss of life during a peaceful protest.

The Instituto Loyola community gathered for the funeral on Saturday morning. Hundreds came out to fill the church. Teachers wore their blue Loyola polos, and most students wore their white uniform shirts. A group of 10 students flanked his casket in front of the altar and remained standing throughout the service. It was a somber event.

The protests have continued in Managua in the days since. Tens of thousands peacefully took to the streets on Monday afternoon wearing the blue and white of the national flag. They carried photos and names of the roughly 30 confirmed deaths; many more are injured, and dozens are missing or detained.

When the marches started last week, protesters were demanding that the social security reform be thrown out. President Ortega finally made that concession on Sunday, but it has come too late. In response to the government’s violent oppression of the peaceful protests, the demands have changed. People are boldly calling for Mr. Ortega to resign and yield his power.

Through the courage and fearlessness of the youth, the people of Nicaragua have woken up. The peace has been broken. Has a new revolution been born? 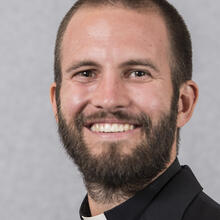