It’s bodies against bullets at the Gaza border 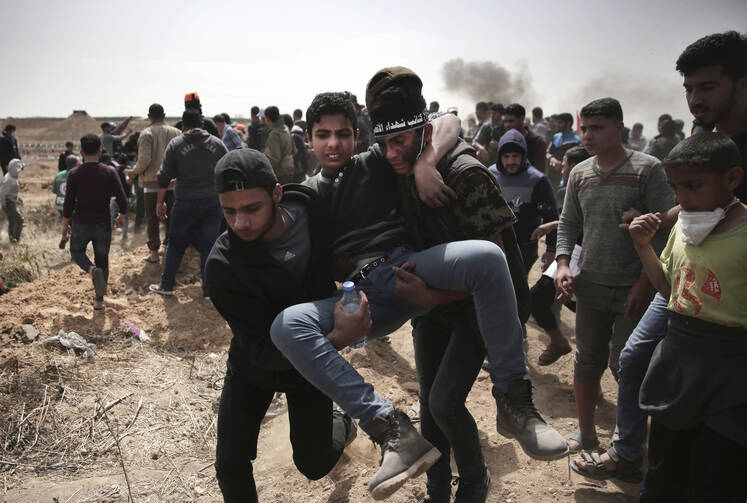 For a third Friday in a row, Palestinian demonstrators gathered on the border with Israel on April 13 to protest the Israeli occupation of Palestinian lands and their virtual imprisonment in the seaside, desert enclave Gazans call their home. The protestors were met by heavy barrages of tear gas and live fire from the Israeli side.

The New York Times reported on Friday morning that more than 1,000 were wounded, including 10 nurses and paramedics and 223 by gunfire, and one killed. In three days of protest, 35 demonstrators have been died. The demonstrations, while provocative, have been calculatedly nonviolent.

One demonstrator Abjad Abu Jamous, 26, told a reporter that if he had a chance to confront an Israeli soldier face to face, he would approach with his arms outstretched making ‘V’ for victory signs with both his hands. “When I raise the victory fingers, the Israeli soldier will know that I have nothing in my hands,” said Abu Jamous. “If he is a man, he won’t shoot.

Hamas, it seems, has taken Israeli contempt for Palestinian life as a cultural and political weakness that Gazans can turn against the oppressor state.

“It’s a peaceful protest—we have no weapons,” the protester said. “I want to show the Jews that we can enter our lands without weapons, only with a slingshot and stones.”

The orchestrated demonstration for the day included burning Israeli flags and desecrating a larger blue and white Israeli flag with its Star of David by running over it on foot, with motorbikes and even on camel. The major symbol of the demonstrations, however, has been the protestors’ willingness to make themselves targets for Israeli soldiers.

Flexible, Not Principled Tactics
Hamas, the Islamic political party that runs the Gaza Strip, has taken advantage of Israel’s low regard for Palestinian life to garner wider support for its cause after missiles, suicide bombings and on occasion something close to all-out war have failed to make gains for it.

When it comes to relation with Israel, Hamas has not always been an implacable enemy. The nascent movement, a branch of the Muslim Brotherhood, was supported in its early years by Shin Beth, the Israeli domestic intelligence, to serve as a counterweight to Fatah and the Palestine Liberation Organization, the leading Palestinian groups.

On several occasions, Hamas conducted extended ceasefires, hudna in Arabic, but Israeli repeatedly refused to participate. Whenever any group killed Israelis, diplomats explained to me, Israel would hold Hamas responsible and so was likely to attack without regard to a ceasefire.

In an interview before his death in 2004 with Catholic, Anglican and Lutheran leaders from Jerusalem, Sheikh Ahmed Yassin, the spiritual leader of Hamas, declared that Hamas would end its conflict with Israel on condition that Israel, for its part, would withdraw to the 1967 borders or Green Line. Within a few weeks, Yassin was assassinated in an Israeli “targeted killing.”

Contempt for Palestinian Life
Hamas, it seems, has taken Israeli contempt for Palestinian life as a cultural and political weakness that Gazans can turn against the oppressor state. The demonstrations will take place every Friday until May 15, the 70th anniversary of Israeli independence, the date, Palestinians call Nachba, their national “catastrophe.”

Like Gandhi in colonial India, Hamas is banking on a hope that the world’s revulsion at armed attacks on unarmed protesters will win world opinion to its side, even as Israelis themselves have grown increasingly hard-hearted toward all Palestinians.

A 2016 United Nations report, for example, found that during the 2014 Gaza War, Israeli troops, in contravention of the laws of armed conflict, “[attacked] residential buildings without an apparent military target, using artillery and other high explosive weapons indiscriminately in populated areas, and apparently targeting civilians not participating in hostilities.” The report also cited Hamas for its missile attacks on Israeli residential areas.

Very few violations of civilian immunity by Israeli forces ever go to trial in Israel, and there are still fewer prosecutions. Hamas, the de facto governing power in Gaza, has no record of prosecuting its member for killing Israeli non-combatants. Likewise, few civilian-on-civilian killings of Palestinians by Israelis, if they reach judicial conviction, receive any serious sentence.

International Law requires that once an assailant is no longer a threat, he or she should not be killed. In an infamous 2016 case, I.D.F. Sgt. Elor Azaria was found guilty of manslaughter for shooting a disarmed and wounded Palestinian attacker while he lay on the ground. When Azaria was ultimately convicted and given a minimal sentence, Prime Minister Binyamin Netanyahu led a campaign to pardon the sergeant. For the I.D.F.’s critics, the Azaria case was an exemplary instance of Israeli tolerance for the use of excessive force.

Paradoxically, the greater the separation of the two people, the greater too is their inhumanity to one another. Gazans are isolated from Israel by underground barriers, barbed wire, heavy-duty walls and the sea. Their interaction with Israelis has been seriously limited for ages. A Times video shows the jubilation of I.D.F. soldiers as bullets bring down Palestinian protesters.

The Separation Wall that divides Israel from the West Bank has led to a severe diminishment of contact between the two peoples. Two decades ago, before Ariel Sharon sparked the Second Intifada when he ascended the Haram al Sherif, neighborhoods in Jerusalem like Sheikh Jirrah and Jaffa Gate were zones where Israelis, Palestinians and internationals commingled in restaurants, at parties and on the streets. With construction of the barrier, it is much less likely that members of one group will have personal knowledge of members of the other. Separation may be a way to reduce vulnerability; it is no way to build peace.

Prospects for Nonviolence
Conditions for the use of nonviolence by Hamas are not promising. In the United States international news reporting is at a historic low, and xenophobia, sometimes promoted by President Trump’s migrant bashing and Islamophobia, is at a high. Europeans, too, long the strongest advocates of the Palestinian cause, find their own ability to respond to needs abroad limited by populist politics. In the Middle East, Saudi Arabia’s crown prince is an ally of Israel and an enemy of popular movements. The times could not be less propitious for arousing the conscience of humankind in favor of nonviolent witness.

Nonetheless, repeated defeats at the border, in the classic Gandhian style, may open a path to victory. Especially if there is mass action on Nachba Day, May 15, the brutality of Israeli occupation of the West Bank and the closure of Gaza may pierce Israeli consciences. The inhumanity and instability of Israeli domination of the Palestinian people may also become clear to Israeli minds, and the desire for peace may be re-kindled among both peoples. 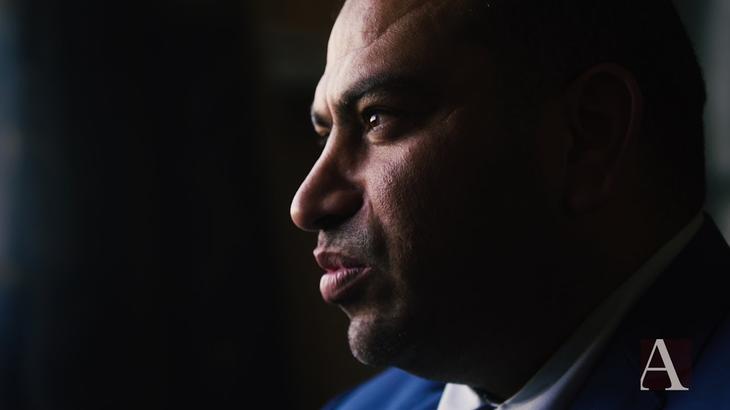 Drew Christiansen, S.J., former editor-in-chief and president of America, is Distinguished Professor of Ethics and Global Development at Georgetown University and a senior research fellow at the Berkley Center for Religion, Peace and World Affairs.

"Hamas, it seems, has taken Israeli contempt for Palestinian life as a cultural and political weakness"

Clueless author doesn't understand what the "demonstration" is all about. From an article that appeared in the NY Times a few days ago:

"The military said that on Friday, protesters hurled several explosive devices and firebombs, using the thick plumes of smoke from burning tires as a cover, and that several attempts to cross the fence were thwarted.

Gaza's shadowy Hamas strongman, Yehiyeh Sinwar, told a cheering crowd in one of the protest camps Friday that a border breach is coming.

The world should "wait for our great move, when we penetrate the borders and pray at Al-Aqsa," Sinwar said, referring to the major Muslim shrine in Jerusalem.

He was interrupted several times by the crowd, who chanted, "We are going to Jerusalem, millions of martyrs!" and "God bless you Sinwar!""

If Israel waits until tens of thousands of "martyrs" pour across the border, the casualties will be higher by orders of magnitude. The only hope of avoiding a blood bath like that is to show that Israel won't allow that to happen.

Thank you for breaking through the bs.

You label Fr. Christiansen clueless and then in the next slash at the keyboard present as credible a quote from the utterly pro-Zionist and unfailingly anti-Palestinian rights New York Times. It's clear you have 'kettle calling the pot black' issues, perhaps to be addressed with a little application of erudition.

Thank you Fr. Christiansen for an excellent article that challenges the mainstream narrative stereotyping the Palestinian people as ‘terrorists’ and the Israeli system as a victim fighting for survival and thus, no restrictions on weapons and violence needed. Many hesitate to comment on Israel’s ongoing, disproportionate aggressions for fear of being labeled ‘anti-Semitic’.

Unfortunately, anti-Semitism against Jewish people exists, and it – like any form of discrimination - must be condemned. (But Palestinians are also Semitic people). At the outset, it’s important to clarify that criticism of the Israeli system is not a commentary on the revered Jewish religion. It has to do with government systemic injustices and apartheid-like policies that dehumanize Palestinians in the West Bank and Gaza. Organizations like Jewish Voice for Peace show that Jewish people and many others are denouncing these injustices.

A peaceful, just solution will hopefully and probably come from inside – as it should. The organization Combatants for Peace incarnate the hope that hate and violence can be transformed into solidarity and a non-violent way forward. What a hopeful identity statement! (from their website): In 2006, Israeli and Palestinian former combatants, people who had taken an active role in the conflict, laid down their weapons and established Combatants for Peace. The egalitarian, bi-national, grassroots organization was founded on the belief that the cycle of violence can only be broken when Israelis and Palestinians join forces. Committed to joint nonviolence since its foundation, CFP works to both transform and resolve the conflict by ending Israeli occupation and all forms of violence between the two sides and building a peaceful future for both peoples.

Fr. Christiansen states: The Separation Wall that divides Israel from the West Bank has led to a severe diminishment of contact between the two peoples. It is worse than that. The ‘wall’ weaves in and out of the West Bank thereby dividing and creating numerous obstacles and check-points for Palestinian peoples inside their own land!