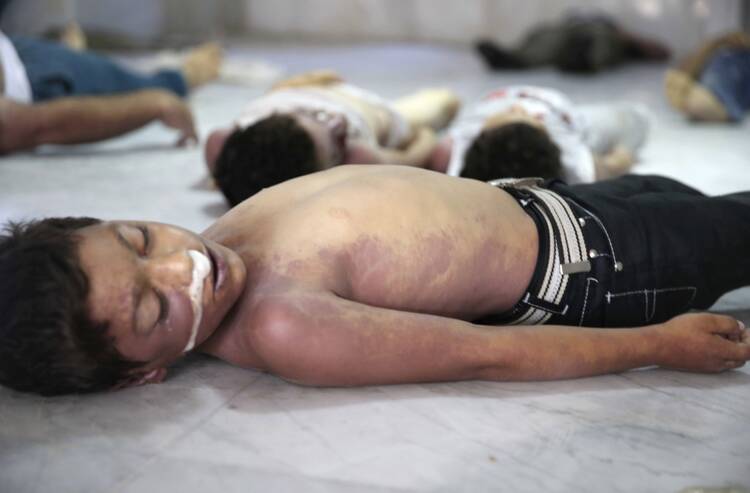 Pope Francis called again for an end to the fighting in Syria, denouncing the "multiplication of massacres and atrocious acts," including the suspected chemical weapons attack that left hundreds dead.

As U.N. weapons inspectors received permission from the Syrian government on Aug. 25 to visit the site of the alleged attack, Pope Francis said the "terrible images" of the dead, including children, "push me once again to raise a voice so that the roar of the weapons would stop."

"It is not clashes, but an ability to meet and to dialogue that offers prospects for a hope of resolving the problems," the pope said after reciting the Angelus with visitors in St. Peter's Square.

Once again the pope asked the crowd to join him in praying that Mary, queen of peace, would intercede to stop the fighting that has raged in Syria since March 2011 as rebels try to oust Syrian President Bashar Assad.

"From the depths of my heart, I want to express my closeness in prayer and solidarity with all the victims of this conflict (and) all those who are suffering, especially the children, and ask them to keep their hopes for peace alive," the pope said.

He asked the international community to pay more attention to the conflict in Syria and help the nation's people "find a solution to this war that is sowing destruction and death."

Archbishop Mario Zenari, the Vatican nuncio to Syria, told Vatican Radio Aug. 25 that looking at the images of the alleged chemical attack, "I hear the cry of these children, these innocent victims."

At the same time, he said he prayed that the leaders of both sides in the conflict as well as leaders in the international community "would be gifted with much wisdom and much prudence" as they decide how to move forward.

"We must do so in a way that these crimes, these massacres never happen again," the archbishop said. "We must find the most appropriate and opportune means to react, ways that will not complicate the situation."

Catholic News Service
Show Comments (
1
)
Comments are automatically closed two weeks after an article's initial publication. See our comments policy for more.
Beth Cioffoletti
9 years 5 months ago
As the US debates whether or not to get involved - which means primarily military intervention and supplying weapons (agents of killing) to one side or the other - what about more immediate humanitarian help. I read that Syrian doctors ran out of atropine, the antidote to chemical poison. What about sending more of that as well as doctors and nurses and aides to help the dire medical crisis? Is there a way that we can be nonviolently involved?