The trouble with being the ‘only Latino in the room’ 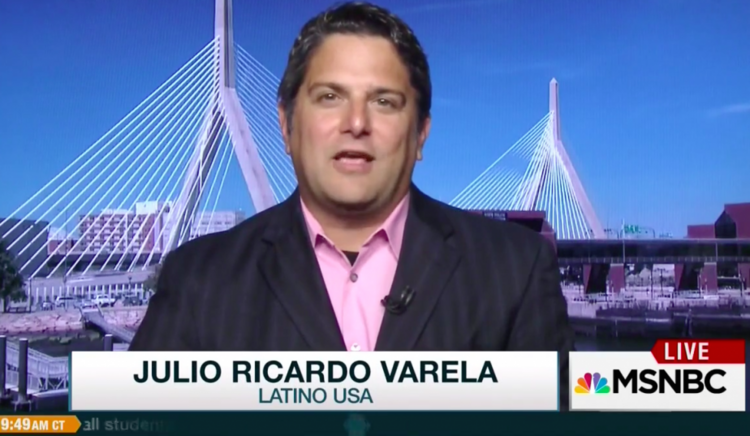 Julio Ricardo Varela, from a 2015 appearance on MSNBC (screenshot from Latino USA)

A few months after President Trump moved into the White House, a study conducted by the nonprofit research group Media Matters concluded that the morning shows on cable news channels continued to skew white and male when it came to guests.

According to the analysis by Cristina López G., of the 2,862 guests on the three major morning news shows (CNN’s “New Day,” MSNBC’s “Morning Joe” and “Fox & Friends”) in January and February of last year, 85 percent were non-Latino white and 77 percent were male, with little difference among the three networks. Only 8 percent of the guests were black, and 3.5 percent were Latino; less than 3 percent were Asian. These pitiful representation numbers fly in the face of the country’s actual demographics. According to the latest Census data, the U.S. population is only 61 percent white (and not Hispanic or Latino), with 18 percent identifying as Hispanic or Latino, 13 percent identifying as black and 6 percent identifying as Asian. (Also notable: Despite the Middle East being a frequent topic on news programs, less than 3 percent of guests were of Middle Eastern heritage.)

Members of marginalized groups are often expected to represent everyone in their racial or ethnic or religious category.

It seems that changing demographics have not yet led to any real change in cable news’s diversity embarrassment—and I see no real sign that TV news executives will wake up to this, especially during the age of Trump. A diversity of opinion is the standard when it comes to white males reacting to news items in a roundtable talk, but members of marginalized groups are often alone on panels and are expected to represent everyone in their racial or ethnic or religious category.

In my case, this is known as “being the only Latino in the room.”

Being the only Latino means that while the white men get to disagree with each other and develop idiosyncratic or counterintuitive arguments, you can never just say how you feel or what you think about a story. Instead, you always have to frame your comments in a way that responds to the needs of the 56.5 million people who share some part of your identity.

Why not change the narrative so more U.S. Latino and Latin American voices can add more layers to the conversation?

It is a lot of pressure to represent a community that many think of as having one viewpoint. Latinos in the United States are as complex as the 21 Latin American and Caribbean countries they represent. (Yes, I am counting you, Brazil and Haiti.) Not all of us speak Spanish. Not all of us speak English. Not all of us all are first-generation immigrants. Not all of us can trace our families’ generations in this country to the time before European conquerors came to the Western Hemisphere in the name of white supremacy, religion and greed.

Being Latino in the 21st century has its own deep complexities that many non-Latinos in the United States never get to really see. They may see one Latino on a cable news panel, but in an overwhelmingly white and male television news landscape, they never see two or even three Latinos tease out how class, race and inequality play a role in major national debates on immigration and other issues.

A diversity of opinion does not seem to matter when it comes to Latinos on English-language TV. We do not see the Latino arguing for the “rule of law” in immigration policy debate with a Latino who wants immigration reform to bring undocumented residents out of the shadows. We do not see the Mexican businessman who advocates for free trade engaging the Mexican-American activist for workers’ rights.

This is what is missing now in the current focus on Trump Republicans and Resistance Democrats. Nuance is too much for the “border wall or no border wall” TV news executives. Why not change the narrative so more U.S. Latino and Latin American voices can add more layers to the conversation?

In a TV news world that is still mostly white and male, more inclusion may be seen as a threat to those who advanced their career under the old rules. But it is time to bring new players into the game. 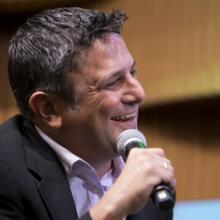 Julio Ricardo Varela is the co-host of the Webby-nominated “In The Thick” podcast, a contributor to Latino USA and the founder of LatinoRebels.com.