The death of Winnie Mandela marks the end of an era 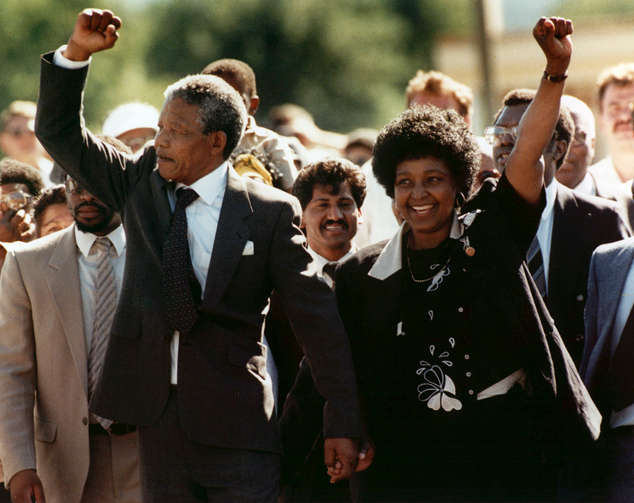 Nelson Mandela and Winnie Mandela walk together on Feb. 11, 1990, upon his release from prison in Cape Town. Anti-apartheid activist Winnie Madikizela-Mandela died on April 2 at the age of 81. (AP Photo)

The death on April 2 of Winnie Madikizela-Mandela, ex-wife of the late Nelson Mandela and one of the country’s most controversial anti-apartheid activists, is another sign that the “struggle era” in South Africa is ending.

The generation of activists that guided the nonviolent struggle against apartheid in the 1950s into the era of armed resistance (the early 1960s until 1990) and through the negotiations to democracy in 1994 is dying out. Apart from Andrew Mlangeni and Denis Goldberg, the leaders of the African National Congress’s armed wing—the “Rivonia Trialists,” including Nelson Mandela, Govan Mbeki, Walter Sisulu and Ahmed Kathrada—are all dead. Though never an active part of the A.N.C.’s armed insurgency, Winnie Mandela was part of that generation.

Born in the town of Bizana, in the Eastern Cape, in 1936, Nomzamo Winifred Zanyiwe Madikizela studied at the Jan Hofmeyer School of Social Work, becoming the first qualified black social worker in South Africa. Many years later she completed a bachelor’s degree in international relations at the University of the Witwatersrand in Johannesburg. In 1957 she met Nelson Mandela, who was in the process of a divorce. They married in 1958 and had two children before Mandela’s involvement in the struggle against apartheid ended in his being sent to the maximum security prison on Robben Island.

As the wife of South Africa’s most famous political prisoner, she was ruthlessly persecuted.

With Mandela in prison, Winnie (as she became known to her comrades) combined raising her children with her social work and political activism. As the wife of South Africa’s most famous political prisoner, she was ruthlessly persecuted—detained without trial for months, tortured and finally banished to Brandfort, a small town in the Free State Province.

While in Brandfort she put her social work skills to good use, developing welfare schemes among its poor. Her work brought her into contact with leading figures of the town’s white community, and quite a few of them, overcoming the unease of dealing with the wife of Nelson Mandela, came to respect her.

She became a political symbol for those who lived under the ruthless rule of apartheid, particularly those imprisoned or banished. Recently former President Thabo Mbeki commented:

In the context of the global struggle for the release of political prisoners in our country, our movement took a deliberate decision to profile Nelson Mandela as the representative personality of these prisoners, and therefore to use his personal political biography, including the persecution of his then wife, Winnie Mandela, dramatically to present to the world and the South African community the brutality of the apartheid system.

Winnie Mandela’s celebrity status no doubt played a part in her decision in the 1980s to break her banning order and return to her home in Soweto, near Johannesburg. She also openly defied her restrictions to become a patron and top leader in the United Democratic Front, the grand coalition of A.N.C.-friendly groups aimed to “make South Africa ungovernable” from 1984 onward.

Winnie became a political symbol for those who lived under the ruthless rule of apartheid, particularly those imprisoned or banished.

She became particularly popular among militant youth, who appreciated her apparent embracing of “necklacing”—burning someone to death with a gasoline-filled tire—as a means of punishing those who disagreed with the A.N.C. resistance. That, and the incident in which her “football club” of young bodyguards murdered a 14-year-old child named “Stompie” Seipei who was suspected of betrayal, worried many U.D.F. leaders. Having promoted her as a kind of surrogate for her husband, they now tried to restrain her. She had become a loose cannon in a movement that was already starting secret negotiations with the South African state.

Her biographers are divided over her; some portray Winnie Mandela as a monster, others as a courageous women.

Charged with a number of offenses, including conspiracy to murder, she was acquitted on all counts except for the kidnapping of Mr. Seipei and three other youths. Her six-year jail sentence was reduced on appeal to a fine.

In 1997, during the Truth and Reconciliation Commission hearings, Winnie Mandela grudgingly admitted to T.R.C. chair Archbishop Desmond Tutu that things had gone “horribly wrong” during the 1980s, apparently referring to the death of Mr. Seipei, among other incidents. To her fiercest critics, the comments verged on cold indifference; her supporters accepted them as a sign of remorse. Archbishop Tutu, perhaps realizing it was about as far as she could go, accepted her apology. The final report of the T.R.C. in 1998 was less forgiving. It stated that she was “politically and morally accountable for...gross violations of human rights” committed by her supporters.

After Nelson Mandela’s release from prison in 1990, the couple’s relationship cooled, and they divorced in 1996. Though she served as deputy minister of arts and culture from 1994 to 1996 and as a member of parliament from 2009 until her death, she was less than popular with many A.N.C. members. That she was not sidelined altogether can be ascribed to her deep influence (and presidency for a number of years) in the A.N.C. Women’s League and her popularity with militant youth. It was probably considered politic to keep her within the A.N.C. tent rather than cast her out.

What, then, does one make of Winnie Madikizela-Mandela? Her biographers are divided over her; some portray her as a monster, others as a courageous women who triumphed over state brutality. There is probably truth in both these pictures. Madikizela Mandela’s autobiographical writings depict her struggle to survive, raise her family and contribute to the liberation struggle against terrible odds. She was undoubtedly on the receiving end of state-sponsored intimidation, harassment and torture. Such treatment, meted out over many years, cannot but have an effect on a person. All too often the victim becomes the victimizer, and the mind is dulled to the suffering of others. It does not justify one’s actions, but it helps to explain them.

People who knew her in Brandfort respect her for her work among the town’s poor. “Struggle era” veterans acknowledge her as a committed activist and a loyal, if at times undisciplined, member of the A.N.C. On a personal note, a journalist once told me of a suicidal, depressed colleague who in a drunken stupor accidentally phoned Mrs. Madikizela-Mandela at 3 a.m. one morning. He blurted out his desire to kill himself, thinking she was a friend. (He had her number on his cellphone because he had interviewed her once). Though she barely knew him, she talked him through his crisis over the next hour and invited him to call him any time he needed to chat.

Winnie Madikizela-Mandela’s death marks, as I noted, the passing of an era. The “old guard” of the anti-apartheid struggle are dying out. And the “new generation” is no less complex than her.