Is a restored military cause for concern or hope in Haiti? 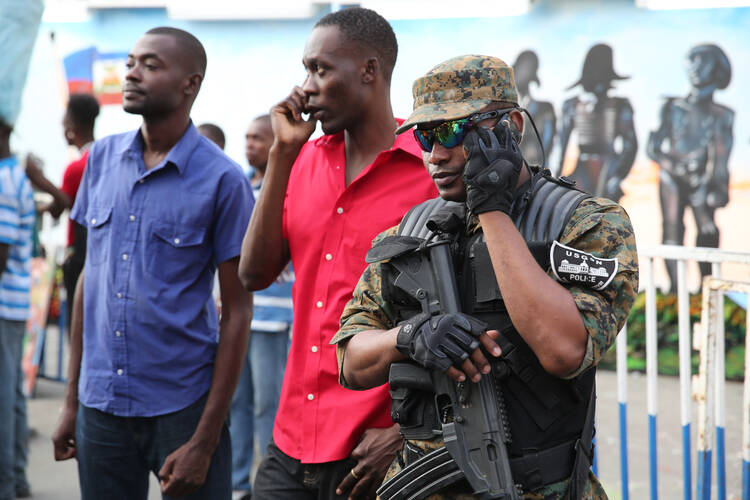 After 22 years of a forced disarmament, the Haitian army is back. President Jovenel Moïse reinstated the national military in November despite a barrage of objections to the decision.

The recent history of the Haitian military is fraught with examples of corruption and oppression, which led to its disbanding in 1995. But supporters say the new force has the potential to create jobs and strengthen Haiti’s international standing. Whatever direction the revived military takes will affect the lives of millions of Haitians.

The new unit is comprised of around 500 soldiers, whose mission is centered on civil works. It is expected to eventually expand to 5,000 troops. That force will be focused on national defense. Mr. Moïse appointed Jodel Lesage as commander in chief of the army and provided $8.5 million in defense spending for 2018. Haiti’s defense minister, Herve Denis, called it a “defense rather than a security force.” Mr. Moïse said in November the force will “not be an army of repression.... This is the army I have promised you.”

What remains unclear is how the military will interact with other national authorities, such as the executive office, the justice department and the national police force, which until now had been in charge of internal security alongside a 13-year United Nations peacekeeping mission that ended in 2017.

The army is an emblem of national pride and history for Haitians, regardless of recent problems. The nation’s roots are in its military. An uprising in 1791 overthrew French rule to end slavery and gain independence.

Given the army’s past repression of the Haitian people, the military’s return has been a cause of concern to many. Protesters have taken to the streets, calling for leaders to shift the defense budget money to education.

The army is also a contemporary sign of Haiti’s sovereignty, something foreign powers have long undercut. It took decades for regional states to recognize Haiti as a country after its revolution. In 1825, French warships besieged the country’s ports, forcing the young nation to pay 150 million francs ($21 billion today) in reparations to former slaveholders.

Conflict escalated between the national army and Haitian citizens in the 20th century. The 1957 election of Francois “Papa Doc” Duvalier, who later named himself leader for life, ushered in a brutal era of military repression. Mr. Duvalier created the Tonton Macoute,a paramilitary force used to solidify his power. The Macoute was responsible for systematically murdering and raping civilians and political opponents.

President Jean-Bertrand Aristide’s populist platform clashed with the military in the 1990s, leading to a successful coup d’état in 1991 that forced Mr. Aristide, a former Salesian father, into exile. Upon his return to power in 1994, Mr. Aristide disbanded the force and transferred responsibility for domestic security to the national police.

Given the army’s past repression of the Haitian people, the military’s return has been a cause of concern to many. Protesters have taken to the streets, calling for leaders to shift the defense budget money to education. Dan Beeton, the director of international communications for the Center for Economic and Policy Research, said bringing back the army is a net negative for the country.

“There is every reason to fear that the new Haitian military will serve the same role as the old Haitian military: to keep the people in line, to stamp out dissent and to ensure the interests of the Haitian elite and of the U.S. government are well guarded,” he said.

But the president argues that the revival of the military is a chance for a new beginning. “The army is our mother,” Mr. Moïse said in November. “When your mother is sick and wears dirty clothes, you do not kill her. You take her to the hospital. So let us join forces to provide needed care to our mother.”

Some Haitians express optimism about the restored military, noting that the new force will create jobs in a country with unemployment of more than 40 percent. A revived Haitian military could perform civil works and help in disaster relief. Haiti has long been dependent on foreign aid to help out in the wake of a natural disaster; a local force could mobilize faster and would have a more nuanced knowledge of the country than international organizations just arriving during a crisis.

Joining the military—or conversely joining the forces who oppose the military—has historically been a pathway for social mobility in Haiti, said Chelsey Kivland, an assistant professor of anthropology at Dartmouth College.

“Because the military has been so involved in political conflict, has been a driver of political factionalism and coups d’etat, if you position yourself on either side—either pro-military or anti-military—it can be an avenue for gaining a following and for obtaining some kind of political influence,” she explained.

She said neighborhood watch and defense groups formed for communal protection from the Macoute. The groups later became important organizations for funneling aid projects through local actors, although some groups continued some of the more nefarious abuses of the military.

Ms. Kivland and Mr. Beeton noted signs to look for in the coming months that might suggest the path the military is taking—returning to its old form or, as the president promises, becoming a reimagined force.

“Are they engaged in civil works, social work, civil engineering projects?” she said. “That will tell us a lot about what direction is this military taking in terms of supporting the public sector versus engaged in these political battles.”

Given the level of foreign influence in Haiti, people in other countries can play an important role in monitoring the revived army, Mr. Beeton said. Social media is a tool that was unavailable in the 1990s.

“If the new military commits abuses, it should be easier to get this information out and hopefully demand accountability.”

Wyatt Massey, a former O'Hare Fellow at America, recently returned to the United States from Haiti.

I sincerely hope that the newly reformed military in Haiti won't engage in persecuting the people of the nation as it has in the past. While it may be worthwhile that, with an incredibly high unemployment rate of 40%, that the armed services can employ some people, I hope that the military will engage in not only defending the nation, but in providing necessary services for the people. I agree with those who are urging that some of the government funds for the armed forces be used for education. As a retired Special Education teacher, I understand that education is crucial for developing people's skills and helping them gain employment. This is a minor matter, but I did recently make a modest contribution to the Saint Luke Foundation for Haiti. This is an agency that provides for the needs of the nation's people, with the Haitian people themselves holding many key positions. The Foundation provides education, health care (including pre and post natal care for women) as well as building homes and other economic assistance.

Is this a joke? Who are they going to fight? The Dominican Republic? Who would want to invade Haiti?

If they build something or keep the internal peace why call them a military? They could be a police force instead or a civil development force.