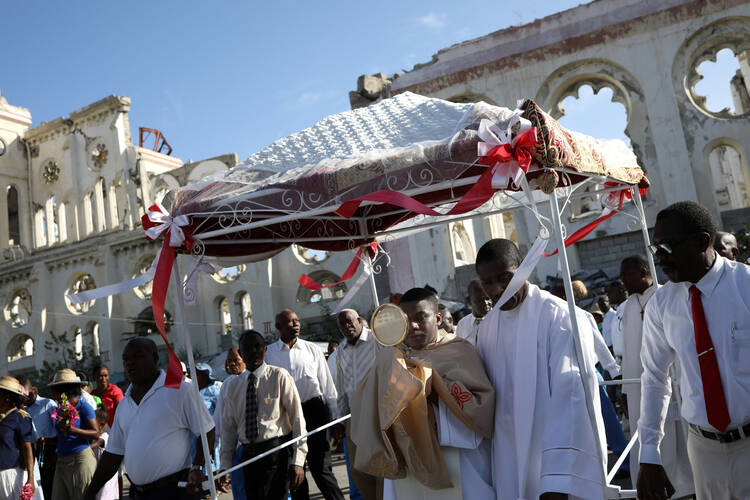 A priest carries a monstrance in a Corpus Christi procession on June 15, 2017, as people pass the ruins of the the Cathedral of Our Lady of the Assumption in Port-au-Prince, Haiti. (CNS photo/Andres Martinez Casares, Reuters)

Four men were arrested on Jan. 16 for the murder of Father Joseph Simoly in Port-au-Prince, Haiti. The four men are also accused of carrying illegal firearms and criminal conspiracy. A Port-au-Prince police inspector told local media that the suspects were known to the police and could be involved in two other murders committed in April and July 2017.

The murder of Father Simoly in December had raised concerns about the safety of members of religious communities in a country that has suffered previous attacks on those in religious life. Father Simoly was shot and killed last Dec. 21 while returning to his home from a nearby bank.

The Catholic Bishops of Haiti issued a statement following the attack, saying, “We associate ourselves with the grief of the family of the Reverend Father Joseph Simoly, of the whole Church that this mourning plunges into consternation and affliction.”

They added, “We expect, from the judicial authorities, that light be made as soon as possible on this assassination and that concrete measures are taken to protect life and secure all Haitian citizens and foreigners living in the country.”

Some Haitians found the bishops’ statement lacking. During Father Simoly’s funeral on Dec. 30, a group disrupted the service, shouting that the church needed to take a firmer stance and demand justice and that otherwise Cardinal Chibly Langlois must step down.

Msgr. Aris does not believe those in religious life in Haiti are currently being targeted more than other groups. Violent crime in Haiti is high but hard to measure since most crimes go unreported.

The protestors interpreted the wording of the bishops’ statement as a sign the government was involved in the murder, said Monsignor Patrick Aris, spokesperson of the Episcopal Conference of Haiti, who was at the funeral.

Although police have not confirmed the motive for the killing, there is little evidence to suggest collusion between the Haitian government and the attackers, despite some precedent for that in the past. Haitian dictator François “Papa Doc” Duvalier expelled Catholic priests, including the Jesuits, at the start of his reign in the late 1950s. And former Catholic priest Jean-Bertrand Aristide, who rose to power in the 1990s, was frequently the target of attacks orchestrated by government.

During his time as a local priest and presidential candidate, he spoke out for the rights of the poor. He survived multiple assassination attempts, including the famous St. Jean Bosco massacre, which was likely carried out by the Haitian government’s secret police. During his two presidential terms, Mr. Aristide was twice forced into exile by coups. He was continually opposed by the country’s elite, who had previously controlled the government.

The church and the Haitian government are intertwined in ways unknown in most other countries. According to the U.S. State Department, the Haitian government provides funds and services to the Catholic Church but not to other religious groups in Haiti. That support includes monthly stipends and diplomatic passports for priests, plus funds for Catholic schools. In a country strained by poverty, the churches are institutions with money and, therefore, targets for the desperate or malicious.

The murder of Father Simoly recalls other attacks on clergy and religious in Haiti in recent years, apparently acts not of political violence but crime. In February 2015, the home of some Catholic clergy was robbed, a priest was shot and nuns were threatened at gunpoint. The Miami Herald reported that between November 2014 and March 2015, “at least 27 religious communities, mostly nuns, have been the target of 39 attacks in six regional departments.”

Despite those crimes, Msgr. Aris does not believe those in religious life in Haiti are currently being targeted more than other groups. Violent crime in Haiti is high but hard to measure since most crimes go unreported. In 2016, the country experienced more than 1,000 homicides. Reports of burglary and home invasions, however, have declined in recent years, according to the Overseas Security Advisory Council.

Wyatt Massey, a former O'Hare Fellow at America, recently returned to the United States from Haiti.