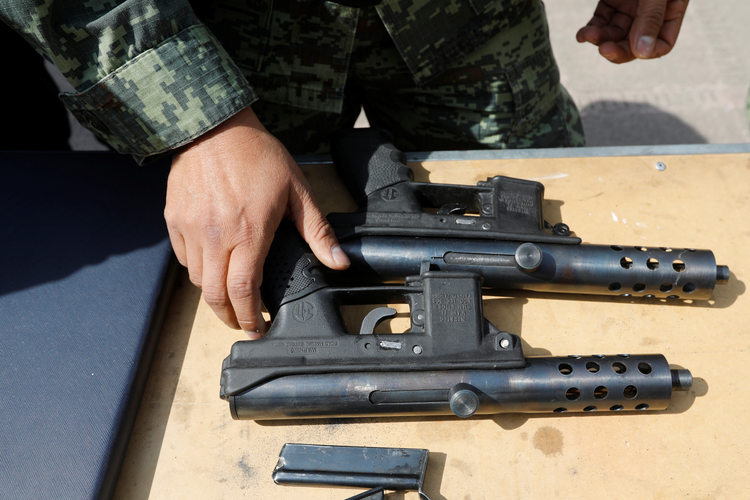 Guns are displayed during a voluntary disarming program Jan. 22 outside the Metropolitan Cathedral in Mexico City. (CNS photo/Carlos Jasso, Reuters)

MEXICO CITY (AP) — The Roman Catholic diocese where two priests were killed earlier this month has withdrawn all nuns from the hyper-violent city of Chilapa in southern Mexico.

The diocese said in a statement that the parents of one of the nuns had been killed and that their school had to close for several months last year due to threats from drug gangs operating in the area.

The nuns ran one of the oldest and most respected schools in Chilapa. The church did not specify how many nuns were involved, but local media said there were four. Local media also reported the nun's parents had been hacked up.

The diocese openly called on the gangs not to hurt children's education and said it hoped others can be found to run the school.

"We call on the criminal gangs not to affect or destroy one of the sacred things we have: the education of our children and youths," the diocese said, noting that if the school closed permanently, many would be left without quality education.

Two priests were shot to death and four other people were wounded Feb. 5 when gunmen attacked their truck as they returned home from a concert in another town in the diocese.

Two priests were shot to death and four other people were wounded Feb. 5 when gunmen attacked their truck.

One of the priests had been photographed earlier holding an assault rifle in the company of armed, masked men. Bishop Salvador Rangel said the priest worked in an area where mines controlled by drug gangs abound. He said the priest "had to greet them" in order to enter the area.

On Thursday, the state prosecutor's office in Guerrero took pains to clarify that the priests did not belong to any drug gang.

It also said that, unlike earlier versions of events, neither the priests nor any of the people with them got into an argument at the outdoor concert. However, it said, there was an incident when spectators were leaving in their vehicles.

Prosecutors had earlier said that the concert of "banda" music was attended by drug gang leaders.

Also on Thursday, the federal Attorney General's Office said it had found two bodies in the Pacific coast state of Nayarit that may be those of two prosecution agents kidnapped earlier this month and forced to appear on a video by a drug gang.

Mexico’s earthquakes are a chance for cross-border solidarity. How will we respond?
Antonio De Loera-Brust

The office said the remains were found in Xalisco, a town that has long been linked to heroin trafficking to the United States. The office said DNA testing would be carried out to confirm their identities.

The agents of the Criminal Investigation Agency, a sort of federal detectives' bureau, disappeared Feb. 5.

A few days later a video was posted showing them bound and on their knees, confessing supposed rights violations while surrounded by five masked gunmen pointing machine pistols and assault rifles at them.

The gunmen apparently thought they were working as undercover intelligence agents, but the Attorney General's Office said the two were off duty and attending a family event in Nayarit when they disappeared.