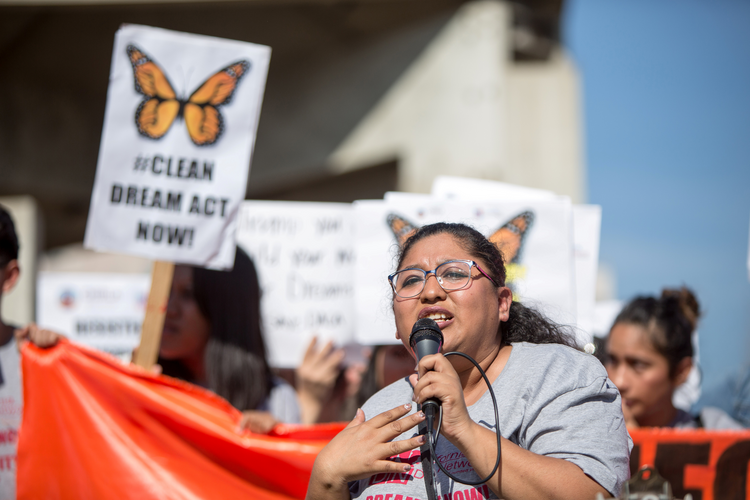 Rosa B., 23, a recipient of the Deferred Action for Childhood Arrivals program, who was brought to the U.S. when she was 4, speaks during a Feb. 3 rally in Los Angeles in support of a permanent legislative solution for immigrants. (CNS photo/Monica Almeida, Reuters)

By day's end Feb. 15, members of the U.S. Senate had rejected four immigration proposals, leaving it unclear how lawmakers will address overall immigration reform and keep the Deferred Action for Childhood Arrivals program in place.

Late that afternoon, Archbishop John C. Wester of Santa Fe, New Mexico, issued an urgent alert to Catholics in his archdiocese to raise their voices "to support the 'Dreamers'" and contact their senators and representatives to vote for a bipartisan measure to preserve the Deferred Action for Childhood Arrivals program, or DACA, which is set to expire March 5.

"Time is running out for them," he said in a statement. "Congress must pass bipartisan legislation that would provide urgently needed relief for Dreamers."

Needing 60 votes for Senate passage, a bipartisan measure that included a path to citizenship for an estimated 1.8 million Dreamers -- those eligible for DACA -- and $25 billion for a border wall failed by six votes. The final vote was 54-45. A bill the Trump administration was supporting was defeated 39 to 60. Two other bills also failed.

The U.S. House was pressing on with its own bill, which by mid-day Feb. 16 was not yet up for a floor vote. Described as "hard line" by opponents, it includes keeping DACA in place, funding a border wall, ending the Diversity Immigrant Visa program, limiting family-based visas, requiring employers to verify job applicants' immigration status and withholding federal grants from so-called "sanctuary" cities.

"As Catholics, we believe the dignity of every human being, particularly that of our immigrant and refugee children and youth, must be protected."

"As Catholics, we believe the dignity of every human being, particularly that of our immigrant and refugee children and youth, must be protected," Archbishop Wester said in his statement. "The sanctity of families must be upheld. The Catholic bishops have long supported undocumented youth brought to the United States by their parents, known as Dreamers, and continue to do so."

"While thankful for the bipartisan majority support for protecting DACA youth, it is unconscionable that nearly 800,000 will continue to live in fear and uncertainty," she said Feb. 15.

Holy Cross Father John I. Jenkins, president of the University of Notre Dame in Indiana, echoed that disappointment, saying: "These young women and men have done nothing wrong and have known life only in the United States. The Dreamers who are enrolled at Notre Dame are also poised to make lasting contributions to the United States.

"We pray that our leaders will end the cruel uncertainty for these talented and dedicated young people who have so much to offer our nation," he said. "Regardless, Notre Dame will continue to support them financially, maintain their enrollment, provide expert legal assistance should that become necessary and do everything it can to support them."

The U.S. Catholic bishops individually and as a body have been urging Congress to protect DACA since September, when President Donald Trump announced he was ending the Obama-era program and told Congress to come up with a legislative fix.

Since 2012, DACA has allowed some individuals brought as minors to the United States by their parents without legal permission to receive a renewable two-year period of protection from deportation and to be eligible for a work permit. As of 2017, approximately 800,000 individuals had DACA status.

Since Trump rescinded the program, many immigration advocates have urged members of Congress to pass the Development, Relief and Education for Alien Minors Act, or DREAM Act, which has long been proposed. The bill is what gives DACA recipients the "Dreamer" name.

In Arizona in late January, Bishop Edward J. Weisenburger of Tucson and his predecessor, now-retired Bishop Gerald F. Kicanas, urged passage of a "clean" bill, like the DREAM Act, to preserve DACA. Their commentary was posted on the diocesan Facebook page.

"While all would agree that reasonable border protection is needed and while clearly countries have a right to protect their borders, it is wrong to barter the lives of these young people by making their protection contingent on a wall or stringent border protection that is unreasonable and a waste of taxpayer's money. Congress should pass the DREAM Act as a stand-alone bill," they said.

"We are at a moment in our nation's history that could define who we are as a people. Traditional American values of fairness and compassion are in conflict," they wrote. "This is a situation that is a moral test for our society; we must not fail."

In a Feb. 2 letter to Arkansas' senators and representatives in Congress, Bishop Anthony B. Taylor called for grass-roots bipartisan support for "a just and humane solution for the Dreamers whose fate is in your hands." He, too, urged they pass a narrowly focused bill to save DACA.

"If enough members of Congress commit to focusing on a narrowly-tailored bipartisan solution, DACA-only legislation is possible (to) provide urgently needed relief for Dreamers," he wrote. "They and their families who have worked hard and made valuable contributions to our country deserve certainty and compassion. Dreamers should not be used as a political bargaining chip for other legislative proposals."

In a Feb. 2 op-ed in the Daily News, Bishop Nicholas DiMarzio of Brooklyn, New York, struck the same tone, predicting that if Congress tied the fate of these young people to a broader immigration reform measure backed by Trump, it would be "a recipe for getting nothing done, at least in the short term."

"There are times that our elected leaders must act because it is the right thing to do as human beings. This is one of those times," he said. "If the Dreamers are left unprotected, it will leave a stain on our nation's character for years to come. If we pursue justice and welcome them as full Americans, it would be one of our finest hours."

There is simply no sense in fixing DACA without also fixing the cause of this conundrum. DACA is by its very own terms temporary. The experience following the Regan amnesty compels the conclusion that you must fix the cause or you will keep experiencing the effect.

Many (most?) DACA supporters are disingenuous in their claims. They want all-out amnesty or nothing.

It is disconcerting, this modern version of Christian teaching, where we are called to love and assist everyone, just some more than others. Recall how the award winning, which should give you pause, Fr. James Martin urged everyone to be more welcoming to people from countries insulted by Donald Trump? What exactly is just and holy in that concept? Nothing! Spare us from God's own glory hounds, please.