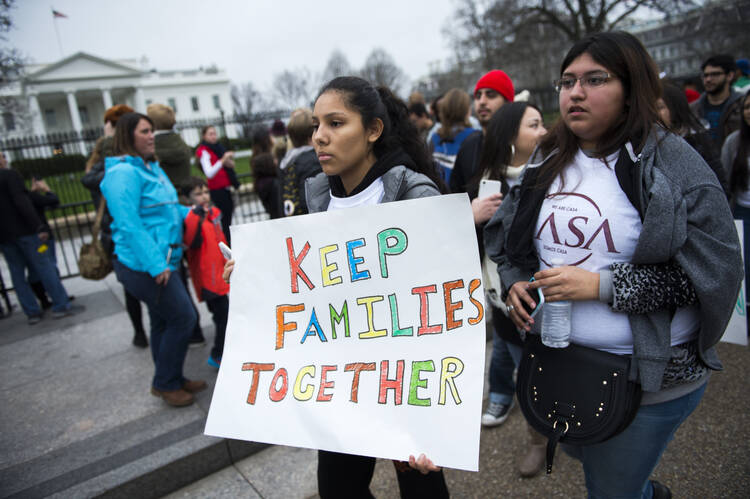 Defending 'Dreamers.' Immigration advocates demonstrate on Pennsylvania Avenue in front of the White House in Washington in 2015. (CNS photo/Shawn Thew/EPA)

In a letter to the U.S. Senate on Dec. 22, Bishop Joe Vásquez, chairman of the U.S. Conference of Catholic Bishops’ Committee on Migration, called for the support of the “Bridge Act,” a measure intended to shield hundreds of thousands of young people living in the United States from deportation. The act would also offer employment authorization to young people who came to the United States without documentation as children who are registered for the Department of Homeland Security’s Deferred Action for Childhood Arrivals program. Under current law many so-called Dreamers are technically subject to deportation to home countries and cultures they may have never known.

The bipartisan “Bar Removal of Individuals who Dream and Grow our Economy Act” was introduced by Republican Senator Lindsey Graham of South Carolina and Democratic Senator Richard Durbin of Illinois in the 114th Congress. The senators plan to re-introduce the measure in the upcoming 115th Congress after the New Year.

In his letter, Bishop Vásquez points out that “there are more than 740,000 young people who have received and benefitted from DACA. They are contributors to our economy, academic standouts in our universities, and leaders in our parishes.”

“As Catholics, we support DACA as we believe in protecting the dignity of every human being, especially that of our children. These young people entered the U.S. as children and know America as their only home.”

Bishop Vásquez, who leads the Diocese of Austin, Tex., adds, “While we endorse the Bridge Act and support DACA youth, we note that DACA and the provisional protected presence status in the measure are temporary substitutes for larger legislative reform of our immigration laws that our country so desperately needs.”

While DACA currently protects hundreds of thousands of young people who grew up in the United States, by some estimates as many as 1 million more are eligible but have not applied for DACA status. Many undocumented young people refrained from filing because they were concerned the DACA database could be used to locate them for deportation after the close of the Obama administration.

During the 2016 campaign, then-candidate Donald J. Trump noted that one of his first acts as president would be to overturn executive orders issued by President Obama, such as the action that created the DACA program, and the candidate frequently noted his desire to deport millions of undocumented people living in the United States. What his actual policy on undocumented residents will be remains unclear but since the campaign’s end, President-elect Trump has softened his tone on immigrant deportations, particularly regarding the group of undocumented residents who came to the United States as children.

The Bridge Act is intended to shore up the status of undocumented people regardless of the policies ultimately adopted by the incoming Trump administration. The new bill would put DACA recipients into a new type of status, “provisional protected presence,” that would last for three years from enactment. According to Senator Durbin’s office, a current DACA recipient would receive that status until the expiration date of his or her DACA status, at which time they would be able to reapply under the new protective regime. An individual who is not a DACA recipient but who is eligible for DACA could also apply for provisional protected presence.

Under the plan, applicants would be required to pay an application fee and pass a criminal background check and clear security vetting. They would also have to meet a number of eligibility criteria indicating that they came to the United States as minors, grew up in the United States and pursued an education.

Senator Durbin has been a long-time supporter of young people without documentation and one of the prime movers behind a legislative campaign to protect them, the so-called Dream Act. That measure has struggled repeatedly and so far unsuccessfully to make it through Congress. In June 2012, a frustrated Mr. Obama issued a presidential executive order creating DACA.

“In my view, the [executive action] issued by President Obama was unconstitutional and President-elect Trump would be right to repeal it," Senator Graham said in a statement issued in early December, supporting the Bridge Act. "However, I do not believe we should pull the rug out and push these young men and women—who came out of the shadows and registered with the federal government—back into the darkness.”

Speaking on behalf of the U.S.C.C.B., Bishop Vásquez vowed to work with Congress and the new administration “to reform our immigration system in a humane and common-sense manner,” arguing that in the meantime, “enactment of the Bridge Act would help ensure that these young individuals who were brought to the United States as children and are contributing so much to our nation can continue to live their lives free of the anxiety that they could at any time be deported to a country they do not know and separated from their families.”

Kevin Clarkeis chief correspondent at America magazine and the author of Oscar Romero: Love Must Win Out. Twitter: @clarkeatamerica

@ClarkeAtAmericaclarke@americamedia.org
Show Comments (
1
)
Comments are automatically closed two weeks after an article's initial publication. See our comments policy for more.
Vincent Gaglione
5 years 11 months ago
One does have to ask the question, if this legislation is passed by the next Congress, how is it that it could not have been done while Obama was President? Especially considering that many regarded Obama’s actions unconstitutional! If such legislation is the right thing to do, why did it have to wait for a new president’s administration? The obstructionism of the Congress, majority Republican, during the Obama years is probably the most corrosive policy in American political life in recent memory. The damage inflicted on the body politic and the American public remains incalculable.