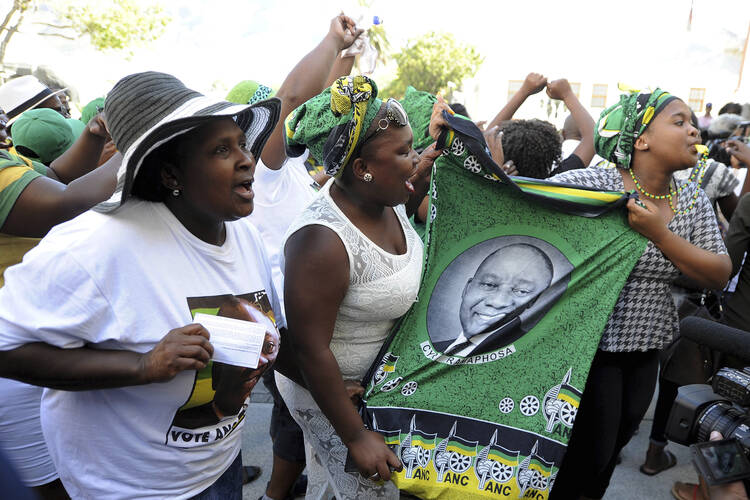 On a day that was both Ash Wednesday and Valentine’s Day, President Jacob Zuma resigned as South Africa’s head of state. The resignation was the culmination of a political standoff between Mr. Zuma and his own party, the African National Congress, which has ruled the nation since 1994.

The current impasse began when the current deputy president of South Africa, Cyril Ramaphosa, won the A.N.C. presidency at its electoral conference last Dec. 18. Mr. Ramaphosa won by a narrow margin over Nkosazana Dlamini-Zuma, Mr. Zuma’s preferred candidate and his former wife, but the National Executive Committee of the party was divided between Ramaphosa loyalists and allies of Mr. Zuma. Over the last few months, Mr. Ramaphosa appears to have won over the A.N.C.’s leadership to his reformist and anti-corruption agenda.

Critics of Mr. Zuma are delighted by his departure. Some of the reaction by South African media, highlighting the unfortunate effects of his presidency, were blunt to the point of obscenity.

The Southern African Catholic Bishops’ Conference welcomed the resignation as “long overdue.” Archbishop Stephen Brislin of Cape Town said that in the centenary year of Nelson Mandela’s birth “we hope and pray for a return to the ideals of servant leadership with which South Africa was blessed in the first years of its democracy” and expressed hope for new leadership with “the integrity that the long suffering people of this country deserve.”

After years of controversy and allegations of corruption, the end came abruptly for a figure who had begun to seem unassailable.

“The fact that Mr. Zuma has been allowed to hold on to the highest position in the land despite long-standing and overwhelming evidence of his unfitness for office has done immense harm to our country’s international reputation, to its economy and, especially, to its poorest and most vulnerable citizens,” Archbishop Brislin said. He urged the governing A.N.C. “to take careful note of the way in which this situation was allowed to develop over the last ten years” and called on the party “to commit itself to a thorough reassessment of its internal standards and mechanisms of accountability.”

Describing the resignation as a “great relief,” the Jesuit Institute of South Africa said in a statement released on Feb. 15: “Though one must distinguish between administrative incompetence and poor personal judgment on one hand and corrupt criminality on the other...the overwhelming evidence of the era that (hopefully) ended on the night of 14 February 2018 is one of nearly a decade of misrule. At the risk of Biblical parody: corruption and incompetence embraced, poor judgment and criminality kissed. And South Africa is the poorer—much poorer—for it.”

The statement continues: “The forgiveness and determination to reconcile that was so characteristic of the first democratic government of South Africa needs to be rekindled…. The Jesuit Institute hopes that in this new moment, all South Africans might pause and reflect on their own complicity in corruption. This includes rejecting the rampant corruption in the corporate sector.”

After years of controversy and allegations of corruption, the end came abruptly for a figure who had begun to seem unassailable. Only a few days ago, the the A.N.C.’s executive committee called on Mr. Zuma to resign immediately from the presidency. He refused, insisting that he would serve out his term or leave when he saw fit.

It was widely assumed that his stalling was part of an attempt by Mr. Zuma to cut deals for himself and his family in exchange for his departure. He sought pensions for his wives and family (Mr. Zuma is a polygamist), maintenance of his private residence near the town of Nkandla and financial assistance for what will be significant personal legal bills.

But Mr. Ramaphosa refused to countenance a deal that included immunity from corruption charges, though a plea bargain remains an option.

Last week, amid the president’s intransigence, the A.N.C. postponed his annual State of the Nation Address less than a day before it was to be given. Shortly afterward the A.N.C.—in line with a policy that allows the executive committee to recall any sitting member of Parliament—called on Mr. Zuma to resign. Still, some of his supporters warned of disruption should Mr. Zuma be removed.

On Feb. 13, the former Zuma loyalist and A.N.C. secretary general Ace Magashule, took up the party’s call for Mr. Zuma to step down. The next day, the party told Mr. Zuma that if he did not resign immediately, it would support the call of an opposition party, the Economic Freedom Fighters, for a vote of no confidence. Within hours, Mr. Zuma angrily responded with language that some interpreted as a threat to maintain power by force if necessary.

At that time, a number of outcomes were possible. Mr. Zuma could have mobilized his considerable support in the “security cluster” (police, military and intelligence services) to maintain control—in effect, engineering a coup from above. Or the A.N.C. could have expelled Mr. Zuma from the party in an attempt to depose him constitutionally, mirroring the fate of Zimbabwe’s Robert Mugabe. As with Mr. Mugabe, the president’s bluster might have just represented a last gasp of defiance.

It is unclear why Mr. Zuma threw in his cards, but he may have been impressed by raids recently conducted by the Hawks, an elite police unit, on businesses and properties owned by the Gupta family, financial backers for much of Mr. Zuma’s tenure. A number of arrests were made, but, contrary to initial reports, it seems none of the Gupta family members were among those them.

Because the Hawks had been seen as under Mr. Zuma’s control, the raids suggested a realignment of power—if not a defection of the security cluster as a whole, then at least division within the bloc as Mr. Ramaphosa strengthened his hold on the A.N.C.

Mr. Ramaphosa was sworn in as interim president of South Africa on Feb. 15. He said that fighting corruption and mismanagement in state-owned enterprises will be a priority of his new administration.

A former trade unionist turned billionaire executive and one of the architects (some believe the chief architect) of the democratic transition of 1994, Mr. Ramaphosa carries the hopes of many South Africans. But he inherits a presidency that has been severely compromised over the past nine years, and a party that has moved many of its stalwarts to despair.

Cleaning up South Africa, getting the economy back on track and addressing the needs of the country’s poorest will be no easy matter. But if the shocking events of Feb. 14 are anything to go by, there are again glimmerings of hope for South Africa’s future.