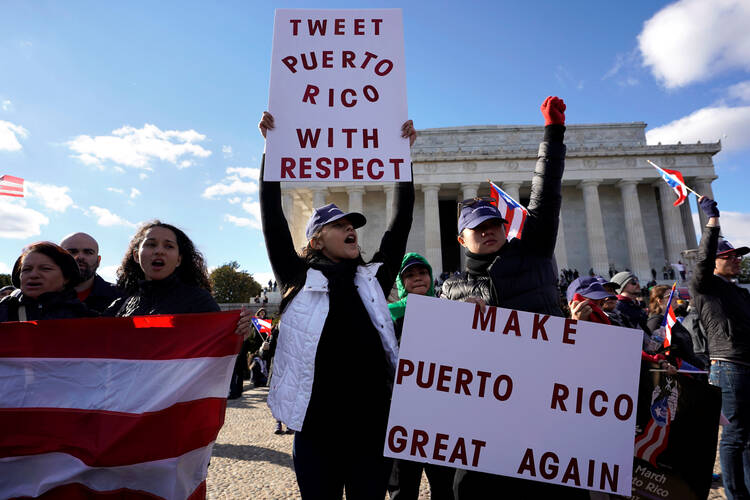 Members of the Hispanic Federation participate in a Unity March in November 2017 in front of the Lincoln Memorial in Washington to highlight the ongoing humanitarian and natural disaster crisis in Puerto Rico. (CNS photo/Yuri Gripas, Reuters)

The budget deal just passed by Congress includes $90 billion in disaster relief, with $11 billion allocated to Puerto Rico and the U.S. Virgin Islands. Will it be enough?

Eric LeCompte, executive director of Jubilee USA Network has serious doubts. “Half a million people in Puerto Rico are still without power,” he said.

While some progress has been made toward returning to normalcy after Hurricanes Irma and Maria last fall, some of the poorest parts of the island remain cut off from the transportation and energy infrastructure. Power outages are common, and there are ongoing problems with clean water. Thousands of bottles of water, which Puerto Ricans now depend on for drinking, are piling on top of the hurricane debris.

“There’s a lot of hopelessness across the island,” Mr. LeCompte said, adding that hundreds of thousands have left Puerto Rico since the hurricane. According to Mr. LeCompte, there has been a surge in suicide rates. While Mr. LeCompte applauded the approval of disaster relief, he added that “the work of Congress is not over yet.”

Hurricane Maria rocked Puerto Rico last September, flooding coastal valleys and causing mudslides in mountainous areas. The island was still recovering from Hurricane Irma, which had hit weeks before. The hurricanes struck as the island was suffering through a severe economic crisis.

Some of the poorest parts of the island remain cut off from the transportation and energy infrastructure.

Even before the hurricane, half of the children in Puerto Rico lived in poverty, according to Mr. LeCompte.

“The suffering was already great on the island with hundreds of schools closed,” he said. “Austerity was impacting health care and social services. Because of the debt crisis, Puerto Rico was ill-prepared to deal with hurricanes.”

The debt led to a shortage of emergency personnel available to care for victims of the hurricanes. Jesuit Father Jorge Ferrer, director of the Instituto de Bioética Eugenio María De Hostos at the Medical Sciences Campus of the University of Puerto Rico in San Juan, said the $4.8 billion newly allocated to Medicaid will help. The program, known as “Mi Salud” in Puerto Rico, would have run out of money in April.

“This is a welcome relief, but it does not solve the problem,” Father Ferrer said. “The long-term solution has to include economic development.”

The $2 billion allocated for energy and rebuilding the electric system will also help, he said. While the majority of San Juan has power, 28 percent of the island remains without it.

“The situation in Puerto Rico continues to be grave and difficult,” Father Ferrer said. “People are still leaving the island. Even before the hurricane, it was said that one doctor left the island every day. So this emigration of medical professionals is a crisis.”

“You could say that in San Juan, we’re in a recovery phase, but in many places in Puerto Rico that is not yet the case,” Father Ferrer said, referring to rural areas he visited recently as “ghost towns.”

“The danger for us is to forget that not everyone is in a state of recovery,” he said.

Mr. LeCompte noted that many Americans still do not realize Puerto Ricans are U.S. citizens. Still, he expects the financial oversight board of Puerto Rico to recommend a five-year suspension of debt payments in the coming weeks.

“There is also a ‘super bankruptcy’ process taking place that Congress passed as a part of legislation,” Mr. LeCompte said. “That bankruptcy process will need to cut about 80 to 90 percent of the debt if Puerto Rico wants to see future economic growth.”

The island’s government estimates Puerto Rico needs $90 billion in aid in the aftermath of the hurricanes, Mr. LeCompte said. The U.S. Virgin Islands have requested more than $7.5 billion.

“We will need more disaster aid bills from Congress in the coming months,” he said. The current budget proposal also falls short of requests from California, Texas and Florida, according to Mr. LeCompte.

In a joint statement, Archbishop Joseph E. Kurtz of Louisville, Ky., chairman of the Committee for Religious Liberty, and Bishop Joseph C. Bambera of Scranton, Pa., chairman of the Committee on Ecumenical and Interreligious Affairs, praised Congress for including provisions to make disaster relief assistance available to houses of worship on the same terms as other nonprofit entities.

“When hurricanes and other natural disasters strike, houses of worship are on the front lines of rebuilding efforts,” they said. “Churches, synagogues, and mosques are vital to their communities, and they, like other important community institutions, need help recovering from the impacts of natural disasters.