The rise and fall of the Berlin Wall and why it matters today. 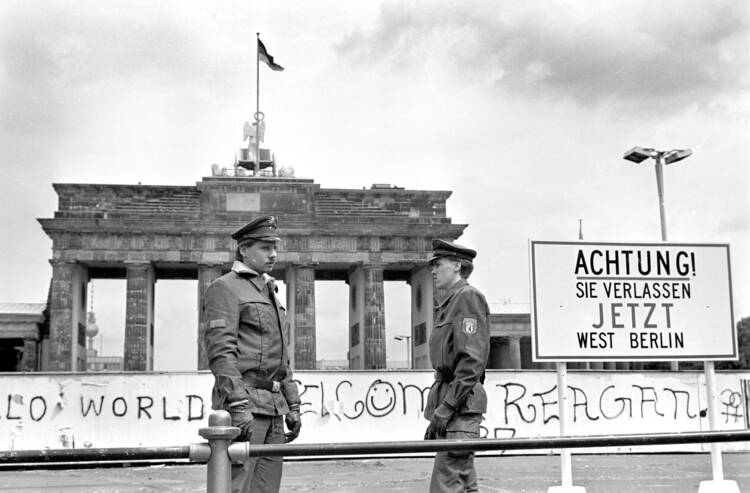 For the generations that grew up in a divided Berlin, the fact that the young will not experience such a life must be seen as evidence of the city’s achievement. Still, there is something lost as the hard-won lessons and perspectives of living in the shadow of the wall begin to recede.

The editors at America were hard at work, observing and commenting on developments from around the world, throughout the 10,316 days the Berlin Wall stood. And as with most people around the world, for most of that period the editors seldom noted the wall’s existence. It was a fact of life, a physical manifestation of the Cold War and its underlying ideological conflict. But at its rise and then at its fall, America’s editors took note. Their writings help us understand the continued relevance of the physical symbol of the Iron Curtain.

On June 10, 1961, Soviet leader Nikita Khrushchev presented President John F. Kennedy with an ultimatum: The Western Allies must leave their zones of occupation in West Berlin or the Soviets would take unilateral action to seize the city. America’s editors were not impressed, writing in the June 14, 1961, issue: “Anyone who has followed the Berlin question for the past three years knows that the West cannot accept any of the choices offered by the Soviet memorandum. If we do, we throw away the key to the defense of Western Europe and the key to our own security. Khrushchev knows in advance that we must reject his proposals, no matter how often he shouts that West Berlin is like a cancer on his face or a bone in his throat.”

Berlin was indeed a problem for the Soviets. An outpost of freedom behind the Iron Curtain, West Berlin provided not only a ready example of a political alternative for East Germany’s oppressed population but also a practical means of escape. Voting with their feet, millions of East Germans were condemning communism in the clearest terms by using West Berlin as an escape hatch. Khrushchev intended to close the hatch.

From now on, Berlin will live with the memory of the wall for longer than it lived with the wall itself.

The editors next weighed in on the escalating crisis in the Aug. 12, 1961, issue: “As we start out down this snaky and dangerous road of ‘negotiating’ the Berlin crisis with Khrushchev, the President’s thinking is undoubtedly dominated by considerations as those that follow. We must somehow buy time on Berlin without backing down on our commitments to that city or selling out some other vital interest of the free world. How is this to be accomplished?”

For the editors the main consideration was a military one: “Despite the modest buildup we plan for our conventional forces, we are and shall remain overwhelmingly outfaced by the conventional forces of the Soviet Union. True, we have our stockpile of H-bombs, but Khrushchev is convinced that, so long as he fights with conventional weapons, we would never be morally callous enough to push the big nuclear button. Our military position, therefore, is weak. This makes our bargaining position weak.”

Yet the editors were clear that despite Soviet pressure, the United States must not back down: “Whatever political ‘accommodations’ we make with the Soviet Union, they must not lead us onto the slippery path of appeasement. Once we set our feet on that road there will be no place left on which to make a stand. This thought must be uppermost in Mr. Kennedy’s mind.”

On Aug. 13, 1961, the day after the issue including that editorial, construction on the Berlin Wall began. In a sense the wall can be said to have prevented a military confrontation, as it represented the Soviets’ giving up any hope of reuniting Berlin under communist control. They would solve their problem of emigration with a border wall instead. Peace would be maintained, but it was the citizens of Berlin that would pay the price. Over the course of the next 10,316 days, at least 140 people would lose their lives as a result of the wall.

By the Oct. 14, 1961, issue, the editors were suggesting that the world need not be so single-mindedly following the events Berlin, writing: “World attention is focused on Berlin these days to the exclusion of almost all else. Yet, as President Kennedy reminded his listeners during his recent UN address, Berlin is not the only place where peace is imperiled. There is an insidious ‘creeping war’ in South Vietnam. Because of its ‘creeping’ character, it may not strike us as a deadly serious affair. Nevertheless, as the President pointed out, aggression is no less real when men are knifed in their homes rather than shot on the battlefield. And aggression anywhere is a threat to all.”

At least 140 people would lose their lives as a result of the wall.

The nation’s Cold War attention would indeed soon turn away from Berlin and toward Southeast Asia, driven there by a war that America would at first support. For Berlin, the wall would become a fact of life, occasionally thrust into the spotlight when used a stage by President Kennedy in 1963 or President Reagan in 1987 (or David Bowie in 1987 and Bruce Springsteen in 1988 for that matter) but otherwise an accepted, if resented, part of life for West Berliners. It was among East Berliners that the seeds of the wall’s collapse were being sown.

On Nov. 9, 1989, the Berlin Wall “fell,” as the East German government suddenly allowed its citizens to pass through to the Western side Rarely has such a major development taken the world so completely by surprise. America addressed the momentous implications of in an editorial titled “Glasnost as a verb: to open a wall,” run in the Nov. 25, 1989, issue: “Now that we have all had a chance to pinch ourselves and rub our eyes, the momentous implications of Nov. 9 are coming clear.”

The main question the opening of the wall raised was German reunification, which at the time was not a foregone conclusion: “The speed and the force with which the topic of German reunification came rushing to the fore have been breathtaking and inevitable—the speed matched that of the wall’s collapse, and the force came from the wall’s having functioned as a symbol of artificial, enforced division. Not everyone is pleased at that prospect. Margaret Thatcher, whose party and Government have seemed content to live with a divided Ireland (in no rush, at any rate, to solve the “Irish question”), said predictably that any talk of German reunification was much too fast.”

Twenty-nine years later we know that, of course, Germany would reunify and would become the dominant power in Europe, much as Mrs. Thatcher feared. However, it is also clear that in East Germany reunification has not been as beneficial as hoped. The formerly communist East continues to lag behind the West. Resentments at the disappearance of jobs and financial security the communist regime once afforded have turned ugly, propelling the genuinely frightening return of far-right violence. The Berlin Wall may have fallen, but many divisions will take a longer time to heal.

Walls are not a thing of the past. The democratic optimism ushered in by the end of the Cold War has been significantly tempered. Refugees today continue to flee communist regimes such as North Korea, which has built a border that rivals even the Iron Curtain in brutality and efficiency. In Europe, developments such as Brexit, the Russian invasion of Ukraine and the construction of a Hungarian border wall have marked the return of hard borders to a Europe that for the past two decades seemed to be moving in the opposite direction.

In the United States, the proposal to build a massive border wall has become a major flashpoint in our politics. While building a wall to keep people in certainly reflects worse on a society than building one to keep people out, the idea shares the delusion of the Berlin Wall, which is that force can forever contain human aspirations. The circumstances that led to both the rise and the fall of the Berlin Wall remind us that the instinct of the human animal is always to move, to be free and to seek better, regardless of any divisions of race, class, nationality or creed. Remembering the Berlin Wall, for all its horrors, also represents remembering this enduring and universal truth.

Antonio De Loera-Brust is a Joseph A. O'Hare Fellow at America.

This whole article is about open borders. The article ends with a non-sequitur, a bait and switch. The horrors of socialism/communism get diverted in the end to allow an endless stream of migrants into societies that are successful because they have a different culture, one amenable to individual freedom.

Maybe the author should be recommending free market capitalism for the countries where the migrants come from. The United States and Western Europe cannot handle them all especially those who are hostile to western civilization of which many are.

Everyone should watch the movie, "The Lives of Others" to see the tragedy that was East Germany.

But maybe there is another alternative. According to the Vatican in the last couple days the United States is a bad place for migrants. They are recommending China as the ideal country to live according to Catholic social principles. I kid you not. From U.K. Catholic Herald.

So I suggest thr author investigate how to get the world's migrants to China. This would be in sync with another America editorial by Kenneth Clarke that the United States is a bad place to live. Maybe the wall should be built to protect any migrants who may mistakenly want to come here.

I saw the headline....I saw the author's name and based on his prior articles in America this article's last paragraph was as predictable as the sun rise. What a piece of overwrought nonsense!

In the spirit of this essay, I suggest the author remove the locks from his doors. Better yet, remove his doors.