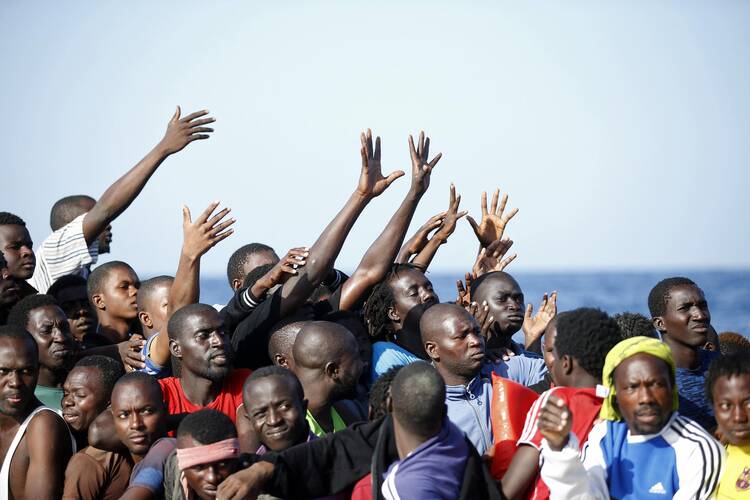 Migrants reach out from a boat during rescue operations Oct. 20 in the Mediterranean Sea. The number of migrants and refugees who have died while making the treacherous journey across the Mediterranean is expected to reach an all-time high in 2016, according to the U.N. Refugee Agency. (CNS photo/Italian Red Cross via EPA)

On Friday morning, a German newspaper, Der Tagesspiegel, published the names and details of about 33,293 people who died trying to reach refuge in Europe.

The information was published in print: 48 pages of tiny type starkly headlined “The List.”

A German newspaper has published the names of 33,000 people who have died trying to reach Europe. pic.twitter.com/Y1JFfGBVV2

The first entry is from 1993, when Kimpua Nsimba, a 24-year-old man from Zaire (now the Democratic Republic of Congo), was found hanged in the bathroom of a detention center in Great Britain. Mr. Nsimba had been detained while seeking asylum, but no one spoke to him during his four-day detention because the center had no Lingala interpreter.

His death was determined to be a suicide.

Many of those identified were young men, age 20 to 25 years old. They came from a variety of places, and readers can trace the eruption of conflicts over the years through spikes in specific countries of origin. In 1999, for example, 108 people died fleeing Kosovo during the war there.

The first entry is from 1993, when a 24-year-old man from Zaire was found hanged in the bathroom of a detention center in Great Britain.

The list also revealed less well-known crises. For example, 160 people from Senegal drowned in March 2007. They fled a region where one in 12 people had swine fever and where a bloody conflict had been waged between the government and a separatist group for 25 years.

My Germanophone coworkers (I don’t speak German) sat together translating entries from the list aloud as I listened. They described a 30-year-old blind man from Mali, struck by lightning riding atop a train to France. They told me about 13 unnamed women and seven children who died when 200 people fell overboard from a ship carrying 500 refugees.

Then there was Veronique, from the Congo, who drowned between Mali and Spain; her 5-year-old son Samuel’s body was recovered two weeks later.

There were Talat Abdulhamid, 36, and Hardi Ghafour, 29, who fled Iraq and died of frostbite after they walked 48 hours through the mountains between Turkey and Bulgaria.

The list was published on the anniversary of the fall of the Berlin Wall.

This year, there was a man—his name, age and origin unknown—who was shot aboard a refugee boat, which was later rescued. He was traveling from Libya to Italy. It is possible he was killed by one of the anti-refugee militias monitoring that route.

At first, my colleagues and I tried to make sense of the stories: He must have been fleeing this war; she must have been escaping that epidemic. Then we realized some of the rows of six-point font denoted hundreds of deaths in 2017.

The Tagesspiegel, in a strong editorial statement, described those listed as “registered asylum-seekers, refugees and migrants, who died as a result of the restrictive policies of Fortress Europe.”

“Fortress Europe” was a World War II-era name for Nazi-occupied territory. It has been re-claimed today as a positive term by those who favor stringent immigration policies in Europe and as a derogatory term by those who oppose such policies.

The list was published on the anniversary of the fall of the Berlin Wall, a nod to the walls keeping out migrants and refugees that Pope Francis often says need to be torn down.

There is a book called the "The Strange Death of Europe" by Douglas Murray. It details the whole migrant process for the last 20 years and the disruptions it is causing in Europe. The people are upset but the politicians remain unresponsive. I put the link in below.

It is becoming more obvious that this migration is having a very negative effect on Europe. So the question is what good is this migrant movement doing both for the migrants and the places where they are entering.

It is not the place or geographical location that makes Europe desirable but the system that created the wealth. The solution would be to expand the system not have people move in and make it unmanageable. Two hundred years ago most people in Europe were serfs, essentially slaves to the local royalty. The objective would be to establish the current European or US system in the countries where the migrants are coming from not have their citizens move to Europe or the US and undermine the stability of these areas.

We tend to want to solve the world's problems in one fell swoop not realizing it has taken us several thousands years to get to the point where some are wealthy when the common condition for the world was abject poverty for nearly all for over ten thousand years.

A related question is "Are the people who have encouraged this migration, responsible for the deaths?" Who has the blood on their hands?

The link to the book,"The Strange Death of Europe", by Douglas Murray is (http://amzn.to/2hqAKlK)

I quit my nine to five work and now I am making85 dollars hourly. ...How? I am freelancing online from my home! My old workwas bad for me ,so I was forced to try something new… Two yrs have passed sinceAnd I say it was the wisest decision i ever made! Here is what i do…dpp

Let's see left-wing anti-Christian secularists demand that Islamic countries and ISRAEL and China take their fair share!!!! When will left wingers stop their Christophobic bigotry and anti-white racist hate? It will be impossible to transplant the population of Africa, Bangladesh, India etc. to the smallish land mass of Europe. Indigenous people of Europe deserve a homeland and to see their culture prosper in the future too. Celebrate Diveristy, don't kill off the indigenous cultures of Europe with mass foreign immigration. We must solve the problems in Africa in Africa. Cardinal Sarah is African, he's a good person we could ask, not secular white-haters.

Goodness. Such vehemence and hatred from a self-righteous self-proclaimed 'Christian,' who ironically displays little, if any, understanding of Christ, His teachings, His example or His words. You claim others have "Christophobic bigotry" while displaying bigotry that is plainly Christophobic. Then go on to cloak white supremacy in "indigenous people of Europe" language. Hatred cloaked in a thin veneer of self-righteousness still leaks out as the vile, black, demonic hatred it is. White supremacy cloaked in the same veneer is even more demonic. For shame.

"Be brief, be charitable..." say the editors. Mr. Murphy, you seem to have a trace of the black demonic hatred you sense in others.

Perhaps you should add Ms. Malloy to your scold list while you are at it.

Not at all. She's just talking common sense.

The population of Africa is currently estimated at 1.2 billion. Most are poor, unskilled, and atrociously governed. Moving them to Europe is not feasible or desirable. Merkel is greatly to blame for setting off this desperate movement. Seems that the Third World wants to move to the First World, in both hemispheres. They will not be accepted.

So, what would you suggest is the most christian way to help those who are fleeing war, extreme civil violence, and extreme poverty, and sometimes religious oppression even from their co-religionists (moderate Muslims have been slaughtered by Islamist terrorists in the tens of thousands)? Much the same reasons most Americans are here - our immigrant ancestors were fleeing war, civil violence, extreme poverty, and, sometimes, religious oppression.

Not all the peoples in the south want to move to the west/north. Most Syrians were quite happy where they were, before bombs started raining down on them, before ISIS was capturing their towns and executing them by the thousands - far more Muslims have died at their hands than have christians.

Doing nothing at all except saying "tough luck" to have been born where you were born is not exactly following Christ.

Sorry, I can't solve the problem of the 700,000 homeless in the US, or the 40 million on food stamps, or the 70 million on Medicaid. Nor can I, or the US and Europe, replace the horrific governments of Africa and the Arab world with something better. We can't turn Russia or China into democracies, or even
save Venezuela or Cuba from their vicious Marxist dictators. We can try to help all those people in their own lands, but a few hundred million more impoverished people is not going to fly here or in Europe.
What's your solution?