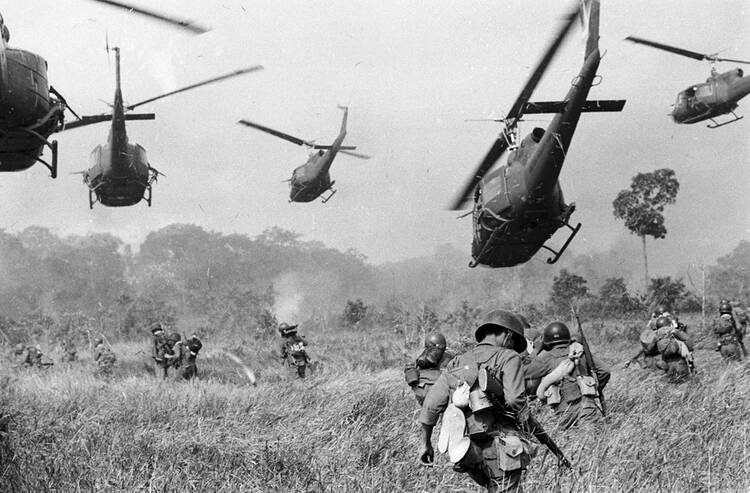 Last January marked the 40th anniversary of the “Agreement on Ending the War and Restoring Peace in Vietnam,” commonly known as the Paris Peace Accords. The principal signatories, U.S. National Security Advisor Henry A. Kissinger and the North Vietnamese emissary Mr. Tho, were awarded the Nobel Peace Prize for their diplomacy, though Le Duc Tho refused to accept it. The cease-fire did not hold. Within months, fighting had resumed between the forces of North and South Vietnam; it continued until the spring of 1975, when the north completed its rout and proceeded to unify the country under Communist rule. The war had raged for more than 20 years and had claimed the lives of perhaps millions of Southeast Asians and 58,000 American soldiers.

The 1973 Paris Peace Accords, however, formally ended U.S. ground involvement in the longest war in American history. The agreement also marked the start of a long, agonizing process of national self-reflection. The Vietnam War had destroyed a presidency, divided the country and wrecked havoc on the American psyche. As the returning troops disembarked, they met a people in the midst of an existential crisis. In the view of much of the world, the United States had gone within a single generation from being savior of the free world to being the globe’s greatest villain, mainly because of its conduct in Vietnam. Throughout the country in 1973, Americans were wrestling with their complicity in what many now conceded was an objectively immoral conflict.

This magazine was no exception. America’s commentary on U.S. policy in Vietnam had gone on as long as the war itself. As the historical narrative in the present issue shows, America was loath to see the true character of the conflict. A year and a half prior to the Paris Peace Accords, though, we had dramatically shifted our editorial stance: “What we must do is ask ourselves about our complicity,” the editors wrote in April 1971; the loss of innocent human life had “mounted beyond the point of any possible proportionate gain in the name of justice.” The conclusion of that editorial was correct, but we were painfully slow to reach it; slower than most of our peers in the Catholic press, certainly slower than the antiwar activists we had casually dismissed as irrelevant.

America had generally good and reasonable motives for our reluctance to abandon the U.S. cause in Vietnam. There was, first of all, our concern for the oppressive and immoral nature of Communism itself. We were rightly horrified, moreover, by the genocidal and corrupt policies of Hanoi’s Communist regime. But like most Westerners, we wrongly conceived of international Communism as a monolith and unquestioningly subscribed to its corollary: the dubious “domino theory,” the notion that if one country fell to international Communism, its neighbors would soon follow.

There were other reasons, however, more peculiar to us: Most of America’s editors at the time had come of age in the embattled Catholic ghettoes of the country’s major cities; they were uncritically sympathetic toward almost any Catholic minority, including the corrupt Catholic minority that governed South Vietnam. The editors were also hesitant to criticize the policy of a country that had only recently come to entertain the possibility that Roman Catholics could be loyal Americans.

All of those factors help to explain why this magazine failed to grasp fully the futile and unethical nature of the U.S. intervention. None of them, however, excuse that failure. The editors acted in good faith and in good conscience; unlike others, however, America was unable to appreciate well enough and early enough what was truly at stake. Ours was not a moral failure, but it was a prudential failure with important moral implications, and it presents an abiding lesson.

America chose Easter 1971 to announce the change in the editorial line on Vietnam: “For the Christian, Easter is the celebration of Christ’s Resurrection, the affirmation of His victory over death and sin, the prelude to His entrance into judgment over all men. Lent, the six weeks preceding this most sacred of Christian holy days, is for the individual Christian a period of scrutiny, pruning and a purifying awareness of having fallen short of his calling and commitment. The end of Lent and the dawn of Easter, this year, provide American Christians with a unique occasion for profound examination of conscience.”

In the spirit of the Lenten season and in recognition of the 40th anniversary of the end of formal U.S. involvement in Vietnam, America asks for forgiveness for what we have done and for what we have failed to do, and we join our prayer with that of our predecessors on the masthead: that the people of the United States will be imbued with “a burning sense of contrition and a renewed purpose to do better as a people.”

<The much maligned Domino Theory does explain Cambodia (and the Killing Fields) and Laos, but I guess these are coincidences, just as Egypt and Syria (et al) are falling into militant Islam’s snare today (so much for the Arab Spring) – coincidences seem to abound.>

Does the DT still pertain if the author turns out to be the primary force which set the dominoes in motion? Cambodia and Laos, who can say now?, may have continued on their own path if the U.S. had not, in seeking to control the history of Vietnam, meddled so catastrophically with those sovereign states.

Bob Baker
9 years 10 months ago
If you are saying that the authors of this theory, in this instance, are China and the Soviet Union, acting through a surrogate, North Vietnam, then one could make a case that they were the primary force. After all, the Soviet Union, China and a few of their client states provided all the arms and training to the North Vietnamese who, in turn, exerted their influence into Laos and Cambodia and made extensive use of the Ho Chi Min Trail through both countries to infiltrate into the South. Cambodia nor Laos supported the United States and its allies in preventing North Vietnam’s use of the Trail through their territory, in basing or any other kind of support, so it is difficult to imagine how the United States meddled in these countries. I must admit to never having been a fan of the Domino Theory because it is often used simplistically, but one has to admit that it sometimes helps frame ideas such as rampant militant Islam across northern and central Africa, the Mid-East and Asia.