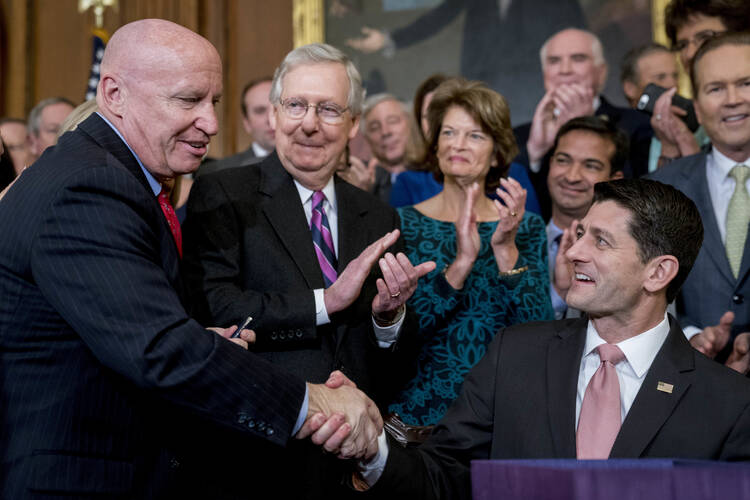 On Dec. 21, Congress passed a last-minute continuing resolution to fund the government through Jan. 19, 2018. This resolution also finally reauthorized federal matching funds for the Children’s Health Insurance Program after their expiration on Sept. 30. The extension will allow the program to continue functioning through March. After that, CHIP will once again face a funding crisis, imperiling a program that provides nine million U.S. children with low-cost health insurance and covers over 300,000 pregnant women.

The willingness to use CHIP as a bargaining tactic highlight the misplaced priorities of the current congressional leadership.

During the last months of argument over CHIP funding, House Republicans put forward a plan for five more years of funding. However, they proposed paying for the extension by diverting money from other public health programs, which Democrats rejected. This robbing-Peter-to-pay-Paul approach and the willingness to use CHIP as a bargaining tactic highlight the misplaced priorities of the current congressional leadership and majority.

The Editors: The G.O.P. tax plan is deliberately designed to collapse
The Editors

In October, Bishop Frank J. Dewane of Venice, Fla., writing to Congress on behalf of the U.S. bishops to urge support for CHIP, reminded them that the program has “garnered widespread support from both parties and from an overwhelming majority of the nation’s governors and state legislatures.” Sadly, it has been pulled into the ongoing brinkmanship that has displaced real legislative work. Families deserve the security of dependable health insurance for their children, and legislators should be cooperating to provide it, not waiting to see who will blink first.

The guarantee of ongoing funding for this important program deserves an up-or-down vote, not one tied to other more controversial changes in health care spending. In the meantime, the media, which has too often waited for legislative crises to draw its attention, should keep asking legislators between now and March about whether they are willing to continue risking CHIP’s failure. And voters should demand that their representatives stop running out the clock and start cooperating on real priorities.

Thank you for expressing this opinion. CHIP funds healthcare for children and pregnant women and should not be a program held hostage to the machinations of the GOP.

If the GOP expects a wave of Democrats to be elected in 2018, they are probably right. The Trump administration has offered a unique and repulsive show of corruption and incompetence. The GOP has shown its willingness to be complicit as long as wealthy donors are served. The entire group shown be thrown out of office and new legislators elected.

The Catholic Church has been a part of this shameful chapter in American politics, primarily because it painted Trump as a "pro-life" candidate on the basis of the fact that his opponent was clearly pro-choice. Perhaps nations decline and fall not because of sexual immorality but when they allow sexual issues to take over the business of governing. If a person can ignore all qualifications except an opposition to abortion, entirely repugnant candidates have a chance to be elected to office. That is what happened in the 2016 election.

How could Republicans consider cutting CHIP and yet call themselves pro-life? Cutting Chip is cutting health care for 300,000 pregnant women, for 300,000 unborn. The GOP also seems poised to cut intrauterine nourishment for the unborn by cutting WIC and SNAP and TANF. And many Catholics are loyal GOP party members. Lord help us. Lord help the unborn.

Sadly none of the position papers by the Bishops' conference get reiterated by local bishops or priests from pulpits, or in church bulletins! The preaching in most parishes is lackluster and bears no relationship to the everyday issues which our Catholics confront.