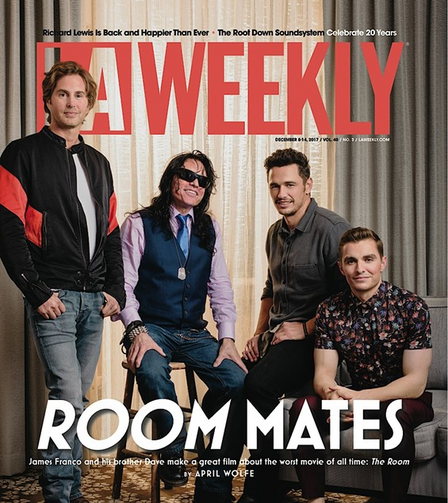 Last week, the cover story of Los Angeles’ premiere alternative weekly newspaper, LA Weekly, concerned the deleterious effects of Wall Street investment on housing in the city. Over a four-page spread, writers Jason McGahan and Hillel Aron laid out how a Dallas-based real estate trust backed by Wall Street investors has taken over significant chunks of housing in Los Angeles and keeps raising rents, sometimes by as much as 37 percent in one year. Meanwhile, the city faces a growing housing crisis.

On the same day that story was published, Semanal Media took over ownership of LA Weekly. Since October, when Semanal bought the publication from Voice Media Group, the word that has kept popping up in reference to the new publishers is “mysterious.”

“LA Weekly is being sold to Semanal Media, a mysterious new company,” reported the L.A. Times;othernews outlets offered much the same, noting that none of the newly created Semanal’s investment partners would make their names known.

As LA Weekly’s more than three million online readers—the largest of any alternative weekly in the country—read about renters being summarily evicted simply for asking about increased rents, Semanal’s new operations manager, Brian Calle, fired nine of the magazine’s 13 staff, including all of its editors and its publisher.

“We were expecting there to be some pain with the sale of @LAWeekly,” wrote editor-in-chief Mara Shalhoup online. “But we weren’t expecting the Red Wedding.”

“We were expecting there to be some pain with the sale of @LAWeekly, but we weren’t expecting the Red Wedding.”

Two days later, in his first official message to readers, Mr. Calle spun the move as indicative of the news media’s broader struggles in the digital age. LA Weekly, he said, had been on a “declining trajectory” and the new owners wanted to help make the publication “relevant” again.

It is certainly true that Los Angeles faces the same struggles over financing strong journalism as the rest of the country. L.A. Press Club award winner The LAist was suddenly shut down by its owner, billionaire CEO Joe Ricketts, in early November, as were other Gothamist publications in New York, Chicago, San Francisco and Washington, D.C.

The L.A. Times newsroom began a union push after owner Tronc (the media conglomerate formerly known as Tribune Publishing) abruptly fired its publisher and top editors in August. And LA Weekly had faced years of cutbacks and changes.

But it had also seemed to come through the worst of it.

“LA Weekly had gotten really good in the last couple of years,” says Evelyn McDonnell, Loyola Marymount associate professor of journalism and new media. “They were really back to covering the communities that the alternative press should be the voice for.”

LA Weekly was also still operating at a profit, which is more than many publications today can say.

In introducing himself and explaining the owners’ sudden changes, Mr. Calle noted, “There is a lot of talk who owns L.A. Weekly.... Is it a Russian oligarch? Is it some Trumpista? Is it Lord Voldemort?” as though the summary firing of the staff at the city’s longest-standing and most important independent press was more an occasion for comedy than concern. “Our new ownership team,” he assured, “is a patchwork of people who care about Los Angeles.”

“Patchwork” generally has two meanings. One is “variety”; but of the six investors in Semanal whom Mr. Calle named, five, including himself, have been Republican donors, including two to the 2016 campaign of Donald Trump. And most run businesses in Orange County, not Los Angeles.

The more regular definition of “patchwork,” though, is “makeshift.” While running the Orange County Register’s largely libertarian-leaning editorial page, Mr. Calle, a self-described “free-market enthusiast,” was voted one of the OC Weekly’s “scariest people” of 2016 for mistakes and misrepresentations in his articles.

One day after his introductory editorial last week, the LA Weekly posted an advertisement soliciting new, unpaid contributions from “Angelinos.” The correct spelling is “Angelenos,” and the photo in the ad meant to represent new writers was actually a Shutterstock photo of French Canadians.

Advertisers have since begun to pull out; award-winning longtime columnist and punk rock legend Henry Rollins has quit; former staff are spearheading a boycott.

For Ms. McDonnell, a journalist with decades of experience at alternative weeklies, including as music editor for New York’s Village Voice, the collapse of papers like LA Weekly represent a significant loss to U.S. society. “They provided the alternative to the mainstream media both in terms of political reporting and viewpoints and in terms of arts coverage and alternative lifestyles,” she says. “These were places where gay, queer, transgender voices flourished.”

Advertisers have since begun to pull out; award-winning longtime columnist and punk rock legend Henry Rollins has quit; former staff are spearheading a boycott.

“The voice that people could have in these publications was really crucial.”

And who will mentor younger writers in Los Angeles now, she wonders. “Yes, there’s a lot of writing on the internet, but it’s not necessarily edited,” she notes. “The rigor of editing at the Village Voice was incredible.” She remembers it as a place where you could be creative and write as you wanted to, “but there were also people there to nurture your voice and to make it as strong as possible.”

At USC’s Annenberg School for Communication and Journalism, founder and director of the school’s Arts Journalism program Sasha Anawalt agrees about the significance of the alternative press. Publications like LA Weekly, she says, offered journalists an opportunity to step back from the haste of a constant 24-hour news cycle and think more broadly on the issues of the day.

The alternative press was also “kind of the megaphone for new journalism. It was the way we got to experiment.”

But she also believes the contemporary struggles within journalism represent not just endings but beginnings.

California declared itself a ‘sanctuary state’—but could that lead to more ICE raids?
Jim McDermott

The present moment, she says, “is a crisis. But the crisis will be answered by extremely interesting, creative, passionate invested journalists.

“There’s going to be break out, ‘screw it’ kind of thinking. Because people are mad—and they’re not just mad about this, they’re mad about everything, the tax cut, Trump, North Korea.

“And when people get mad, they get together.”

Ms. McDonnell has been working in academia the last eight years. And while “it’s a delicate balancing act” maintaining her classes and university responsibilities and her own work (like her write-up of recent books about musicians last week in The New York Times), in the wake of what’s going on she feels lucky. “I’ve been walking around saying, ‘Thank God I did this,’” she says. “I wish I could pull everybody on to this lifeboat.”

Ms. Anawalt wonders whether universities are not a key part of the future of journalism. The academic world could “become a safe harbor, a place where you can congregate with like-minded people to create a force.