California declared itself a ‘sanctuary state’—but could that lead to more ICE raids? 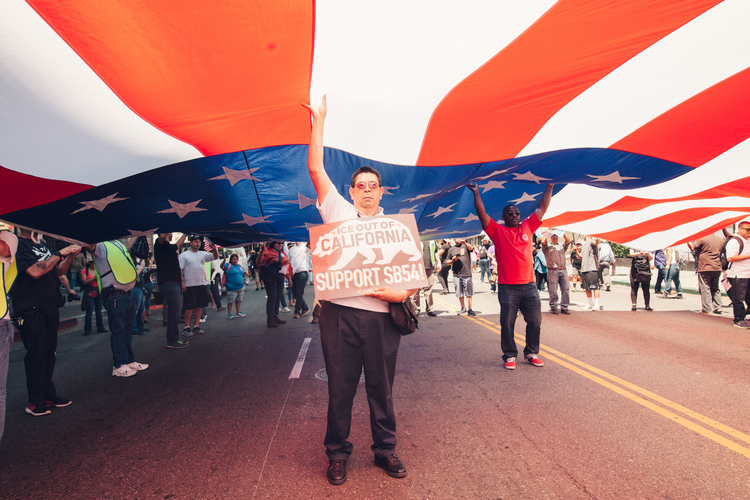 By most accounts, the state of California is a leader in the opposition to the Trump administration’s immigration policy. Over 35 communities here have declared themselves sanctuary cities for undocumented people seeking protection from federal policy. Some, including Los Angeles and San Francisco, have cut ties with the Immigration and Customs Enforcement agency entirely.

In October legislators declared California a sanctuary state. Federal immigration officials will still have the ability to question immigrants in county jails, but beginning on Jan. 1, 2018, California law enforcement will be prohibited from participating in immigration raids or arrests; sharing information about immigrant detainees with federal officials; or holding or questioning undocumented immigrants convicted of minor crimes.

After the legislation passed, Kevin de León, the Democratic leader of the state Senate, who authored the bill, said, “California is building a wall of justice against President Trump’s xenophobic, racist and ignorant immigration policies.”

But the situation in California is more complicated than such clear-cut prohibitions suggest. While many local governments supported the law, the California State Sheriffs’ Association (C.S.S.A.) did not. Last week The Los Angeles Times reported that at least 40 of the state’s 58 sheriffs oppose it.

“California is building a wall of justice against President Trump’s xenophobic, racist and ignorant immigration policies.”

Some sheriffs departments would seem to face significant financial impacts from the new law. ICE leases beds in jails around the country, and the revenue can be significant. Orange County makes $30 million to $40 million a year on leased beds; in northern Yuba County, half the jail’s beds are leased by ICE, bringing in $5 million to $6 million in revenue for the county—half of the sheriff department’s budget. Officials in Yuba County speculate that without the money they would not only potentially have to close the jail but also take deputies off the street.

But each of the four counties impacted will be allowed to keep their deal under the legislation.

According to Cory Salzillo, legislative director for the C.S.S.A., the sheriffs’ opposition generally has little to do with government immigration policy, either. “Since immigration isn’t really our thing on a county level,” he says, “that really isn’t the calculus we’re engaged in. We don’t really get into the value judgments over should ICE be talking to this person.”

No, the main problem for sheriffs is how these new laws affect the overall functioning of the law enforcement community. “When another law enforcement agency is asking our assistance, we don’t think the state should impede our ability to help,” says Mr. Salzillo.

ICE leases beds in jails around the country, and the revenue can be significant.

“Cops have to be able to do their job, and sometimes that means communicating with another law enforcement agency,” he says, explaining that if the I.R.S. came to the jail and asked about the identity of someone held in detention, “we would share that information with them.”

The C.S.S.A. put their concerns to California Governor Jerry Brown directly and saw significant changes made in the legislation. In the case of individuals convicted or accused of more serious crimes, state officials will be able to continue to share information with ICE. “We were very grateful to get the bill amended into a much less destructive form,” says Mr. Salzillo.

But sheriffs still fear the “potential for collateral impact.”

“If the feds want to talk to somebody, they’re going to find them,” Mr. Salzillo argues. “If this communication can’t take place in the jail, a controlled environment, it’s going to happen in the community.”

Do we want situations, he wonders, where ICE is pursuing people down city streets or showing up at people’s doors, scaring locals and finding other undocumented immigrants in the process?

Thomas Homan, the acting director of ICE, has threatened that the state will face more ICE community activity as a result of its new sanctuary law. The agency, he said in a statement released to the media, will have “no choice but to conduct at-large arrests in local neighborhoods and at work sites.”

Acting Director of ICE Thomas Homan has threatened that the state will face more ICE community activity as a result of its new sanctuary law.

Of course, ICE has already increased its activity in communities. Its own website crows of the 40 percent rise in immigration arrests in the first 100 days of the Trump Administration, “more than 400 arrests per day.” And despite the administration’s repeated comments that these deportations represent people who are “the worst of the worst,” in fact 25 percent of them, more than 10,000 people, had no criminal record.

Some California sheriffs also appear to be overtly backing theTrump administration’s more aggressive pursuit of undocumented people. Sheriff Margaret Mims in Fresno gave ICE full access to her computer databases and coordinates prisoner release times with the federal agency. She insists she is going to find other ways of coordinating with ICE under the new state law. “We are not anti-immigrant for working with ICE,” she said last week. “We are anti-criminal activity.”

As a body, though, Mr. Salzillo insists the sheriffs’ association’s wants to stay out of the politics of immigration. “Immigration policy changes; how ICE is empowered and funded and supported changes as well.

“But bottom line,” he says, “what the sheriffs are concerned about is protecting those communities. We are going to obey state law, we want to help other cops and we also want to keep the community safe. This bill makes it difficult to accomplish all those things at the same time.”

Sanctuary Cities are nothing more than holding pens for prey for Illegal Alien Criminals. Never mentioned is the existence of the T or U Visas which protects Illegal Aliens who report or are a victim of crime. I wonder why?

"The failure of the sanctuary bills in Maryland reveals a potentially troublesome fissure for Democrats as they rush to defy Mr. Trump. Their party has staked out an activist position built around protecting undocumented immigrants. But it is one that has alienated many who might have been expected to support it."

But, within the above letter, doesn't really address what the Obama administration will actually do about it to protect US Citizens:

"Californians strongly oppose “sanctuary city” policies under which local authorities ignore federal requests to detain undocumented immigrants who have been arrested but are about to be released, according to a new poll released today by the Institute of Governmental Studies (IGS) at UC Berkeley."