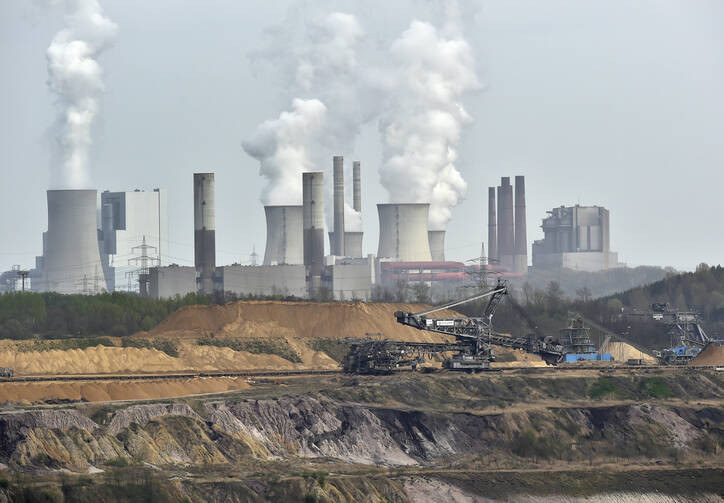 Giant machines dig for brown coal at the open-cast mining Garzweiler in front of a power plant near the city of Grevenbroich in western Germany in April 2014. (AP Photo/Martin Meissner, File)

While representatives from around the world meet in Bonn, Germany, this week to coordinate international efforts to address global warming and climate change, progress in the United States has hit a “speed bump”—the Trump administration.

Reciting a litany of recent White House moves to roll back U.S. efforts to reduce greenhouse gas emissions—among them, pulling out of the 2015 Paris Accord on climate change and abandoning the Obama administration’s Clean Power Plan—Dan Misleh, executive director of the Catholic Climate Covenant, says, “Everybody working on this issue in the Catholic community and beyond are frustrated for sure, but I think this just represents a speed bump, maybe several speed bumps.”

Despite White House moves, Mr. Misleh argues, “The path ahead is pretty clear.

“What we need to do is just continue to live out the challenge of ‘Laudato Si’,’ which is to examine our relationship with the earth, with God and with each other to see how we can become better stewards of this gift of the earth.” And, he adds, to be “more cognizant of our impacts on the earth” and on the earth’s most economically and ecologically vulnerable people.

“What we need to do is just continue to live out the challenge of ‘Laudato Si’,’ which is to examine our relationship with the earth, with God and with each other to see how we can become better stewards of this gift of the earth.”

Bad news on climate change surfaced a short time before delegates—presumably making diligent use of carbon offsets—flew into Bonn. According to the United Nations weather agency, levels of carbon dioxide surged at “record-breaking speed” to new highs in 2016.

The World Meteorological Organization reports that levels of the heat-trapping CO2 in the atmosphere are now the highest in 800,000 years. Speaking at the release of the Greenhouse Gas Bulletin in Geneva on Oct. 30, Petteri Taalas, the W.M.O. secretary-general, said, that the global community is “not moving in the right direction at all.”

The world is racing to prevent an increase of more than 2 degrees Celsius from pre-industrial-age global temperatures. Exceeding that level, according to many climate scientists, would put the planetary climate on the wrong side of a perilous tipping point.

The meetings in Bonn suggest the world is no longer waiting on the United States to do—or even say—the right thing on climate change. Syria, a holdout on the 2015 Paris climate accords, became a signatory to the agreement just before the Bonn gathering, known as COP23, opened. That move means the United States is the only nation on the planet not officially in step with Paris.

Even Gov. Jerry Brown of California found himself the target of anti-carbonites during one COP23 session. Demonstrators interrupted his presentation to urge him to “keep it in the ground.”

In one of his first official acts, President Trump withdrew the United States from the agreement. That withdrawal process cannot be completed until 2020, but the gesture has significantly neutralized U.S. authority on the issue. U.S. representatives in Bonn, in fact, had a tough two weeks, frequently heckled and interrupted by protesters.

Even Gov. Jerry Brown of California found himself the target of anti-carbonites during one COP23 session. Demonstrators interrupted his presentation to urge him to “keep it in the ground.”

In defiance of the Trump administration’s abandonment, Mr. Brown has promised to meet Paris Accord commitments on greenhouse gas emissions, but protesters remained riled about California’s overall impact from the supply side. The state is the nation’s third largest producer of natural gas and oil, and none of the governor’s laudable efforts to reduce demand in California addresses that contradiction. Another U.S. delegate was similarly hounded by protesters after he joined a Bonn panel as perhaps COP23’s sole promoter of “clean” coal technology.

A letter, promoted by the Catholic Climate Covenant and signed by representatives from more than 160 Catholic universities, religious communities and social justice and environmental institutions, urges Congress and the Trump administration to “reassert U.S. leadership in the global effort to address climate change.”

“Climate change is a global problem that requires global solutions,” the signatories wrote to the president. “As our nation enjoys vast resources and has been a primary contributor to climate change, justice requires that the U.S. display strong and consistent leadership within the U.N.F.C.C.C. In this way, the U.S. can help secure science-based global commitments which rapidly reduce greenhouse gas pollution and avoid so-called ‘tipping points’ towards unavoidable and catastrophic impacts.”

That reversal will be a hard sell to an administration that has been on a climate change rampage in recent weeks. In early October, Environmental Protection Agency chief Scott Pruitt rescinded the Obama administration’s Clean Power Plan, a signature effort to reduce greenhouse-gas emissions from the U.S. electricity sector by 32 percent from its 2005 peak by 2030.

And on Oct 22 the E.P.A. canceled the speaking appearance of three agency scientists who were scheduled to discuss climate change at a conference in Rhode Island; the same day it removed dozens of online federal resources dedicated to helping local governments address climate change. In fact, the phrase “climate change” cannot be located in the agency's draft four-year strategic plan, released in early October.

Despite these and other moves to turn back Obama administration policies on climate change or to create obstacles even to basic research on the issue, the government’s National Climate Assessment was released by the Trump administration without comment on Nov. 3. That mandated report reaffirms that climate change is driven almost entirely by human action and warned that sea levels could rise as high as eight feet by the year 2100, as average global temperatures increase by just a few degrees above pre-industrial norms.

That reassertion of the basic science on climate change comes at a time when the United States “has abdicated its leadership in the international arena,” according to Mr. Misleh.

But other nations are stepping forward. On Nov. 15 French President Emmanuel Macron said that France would cover the amount the United States had been expected to contribute for climate science research to the U.N.’s Intergovernmental Panel on Climate Change, a payment halted following the Trump administration’s reneging on the Paris accord.

China, where air quality has become a significant problem, is leaping far ahead of the United States in research and infrastructural development of sustainable energy alternatives. “China has the scale and size economically to be a global leader on this and fill the void [left by Washington],” says Mr. Misleh. China’s recent progress on sustainable energy promises not only to be a boon to its technology sector, economy and environment, he adds, but would also improve “their world stature.”

“It’s a little jarring to think that China is going to become the global leader and perhaps the global moral leader on environmental justice and good stewardship of the earth,” he says. “Not that there’s anything wrong with that, but it should be the role of the United States.”

Instead, Washington’s posture on climate change is becoming increasingly irrelevant, according to Mr. Misleh. Most of the countries participating in Bonn “sort of ignored the U.S. delegation,” he says. “I think they are moving forward with trying to live out their commitments as they agreed to in Paris two years ago.”

He argues that too many individual and civic actors are discovering the benefits, both economic and ecological, of efforts to reduce carbon footprints—a goal a Catholic Climate Covenant program, “Catholic Energies,” helps facilitate. When saving the earth is compatible with saving money, the appeal is hard to resist, he explains.

However many more speed bumps lie ahead, he promises that the Catholic Climate Covenant will still be “seeking ways to influence how we live out our faith in stewardship and in justice, and we’ll keep trying to do that regardless of who is in power in Washington, in Congress or in the White House.”

Where are the numbers? I thought the United States was the world leader in reducing CO2 emissions and Germany where the conference took place was a major emitter. And China continues to grow dramatically in emissions.

Emissions in the US are only slightly above the emissions in 1990 despite there being 75 million more people in the US now and the GDP has risen from $6 trillion to $18.6 trillion. Hug a fracker and thank them for this result.

If, bearing in mind me, you'on bothersome to push your own blog, subsequently using Twitter to state Tweets considering connections to your content can be a necessary adjoin to your promotional strategy, a tactic that can bring in the on your own influence augmented for a blogger than traffic: targeted traffic, the air demonstrative that leads to less bounces and more grow pass upon site. jiofi mifi

I wonder how much Putin is paying Trump to ruin the USA.