The danger in losing our shared sense of history 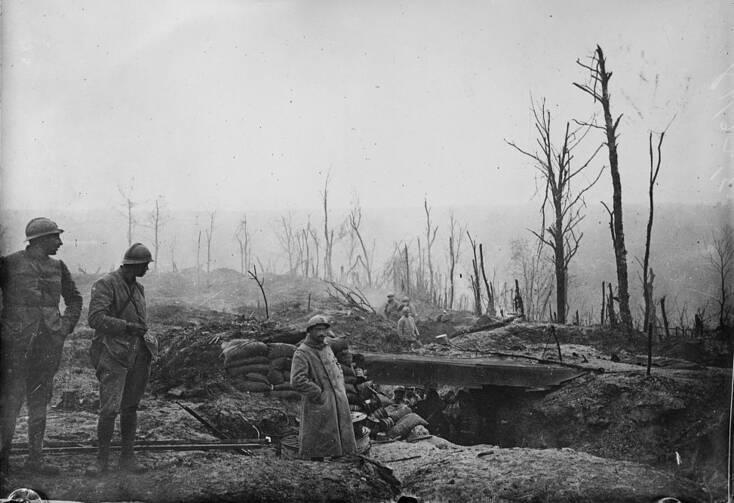 French soldiers in their trench somewhere on the Western Front. (Library of Congress/Wikipedia Commons)

“In Flanders the British have captured 800 yards of German trenches south of Ypres, only to lose them subsequently,” America reported in the issue of March 11, 1916. “In Asia Minor, the Russians are making progress…. The only other theater where there has been fighting of an important character is Verdun.”

That last sentence contains the first reference in our archives to one of the longest, deadliest battles in human history. It began the previous month, when the German Fifth Army attacked the troops of the French Second Army in the hills north of Verdun-sur-Meuse, in northeastern France. When America went to press with that first report, nearly 70,000 men had already fallen. Nearly one million more men from both sides would be killed or wounded before it was over, a number greater than the population of present-day San Francisco.

What we see and how we see it largely depends on where we are standing.

On a bright, windswept day last October, I climbed the stairs of the 151-foot tower that marks the highest point of the battlefield. From the observation deck at the top, I had a panoramic view of the battlefield, where row upon row of alabaster headstones stand mute on a vast countryside still pockmarked by the artillery fire. The tower itself caps an enormous ossuary containing the remains of more than 100,000 unknown soldiers. Through the small windows in the tower’s base, you can see countless piles of human bones, some 12 or 15 feet high. “The windows,” I thought. “The people who designed this place wanted us to see this in all its grotesque magnitude. They wanted us to recoil at the sight of it. They wanted us to remember.”

As my stomach churned and my eyes swelled with tears, I reached for the handkerchief in my pocket. There I also found my iPhone, vibrating with the latest news. I looked down and reviewed the last couple of dozen posts in my Twitter feed: some war talk in Washington, serious charges of sexual harassment, political maneuverings hither and yon. Interesting stuff, some of it serious. But none of it seemed important, at least not in relation to where I was standing.

And that’s the point. What we see and how we see it largely depends on where we are standing. A shared sense of history, of what was, or might’ve been, or could be again, is the indispensable touchstone of our collective judgment, for memory is the soul of conscience. “History, despite its wrenching pain,” Maya Angelou once wrote, “cannot be unlived, but if faced with courage, need not be lived again.”

A shared sense of history is the indispensable touchstone of our collective judgment, for memory is the soul of conscience.

Remembering the past also relativizes the present, reminds us of what is ultimately important and enduring. The church, for example, is one of only two institutions, along with the synagogue, that survived the fall of the Roman Empire. It is probably not going to be brought down by our contemporary ecclesiastical politicking. We’re just not that powerful. And the church will likely survive the United States. Long after the United States has joined Rome and Austria-Hungary and Britain on the ash heap of imperial history, the people of God will still gather to participate in the one true history of humanity, to worship the true Creator and Redeemer of us all. I find hope in that, at least as much as I find despair in the ossuary in Verdun.

5 years in, what I've learned as the editor of America
Matt Malone, S.J.

A Broken World: Benedict XV’s efforts for peace during the First World War
Dennis A. Castillo

The thing about history, though, is that one must know it for it to be instructive. For the first time in human existence, the sum of human knowledge is literally in the palms of our hands. Yet we are painfully ignorant of our own history, like trees without deep roots, easily tumbled by the slightest gale. We often say when talking about dementia that one of the greatest tragedies that can befall an individual is to lose his or her memory. But it’s just as tragic when a people loses its collective memory. It is also far more dangerous. “The beginning of the end of war,” Herman Wouk once wrote, “lies in remembrance.” Without a sense of history, we risk becoming the myopic, jingoistic mob that the poet-soldier Siegfried Sassoon spoke of in his poem, “A Suicide in the Trenches”:

You smug-faced crowds with kindling eye
Who cheer when soldier lads march by,
Sneak home and pray you'll never know
The hell where youth and laughter go.

Ten months after its first report, America was still covering the cataclysm at Verdun: “Additional battles have been reported from the Verdun district at Mort Homme Hill and Hill 304,” one dispatch read. “But no decisive results were obtained.”

For their sake, as well as ours and that of future generations, that last part especially is worth remembering.

Nice job, Matt. Seems America (the country not the magazine) is itself stuck in the trenches of our own political Verdun. The national conversations are always the same no matter the subject matter of the day. We’re bogged down, standing in our own trench, be it “left”or “right,” and lobbing grenades over no man’s land at the others’ trench. It is a pointless war. We just haven’t realized that yet.

Thanks for writing this Matt. We took our sons to Verdun in 1994, the youngest was 11 at that time. Indelible 23 years later.

What a timely piece! Thank you. A priest friend once wrote, "forgiveness is letting go of the hope that the past will be better or different." This does not mean forgetting the past, however, especially as it can be instructive to our present. I am moved, as Fr Malone was at Verdun, every time I visit the Vietnam Memorial in Washington. 50,000 names etched on a wall, all gone for a cause we still cannot explain. Their lives and the lives of those buried at Verdun will not have been in vain if we learn the lessons therein. War is not now, not ever, the answer. Peace comes at great cost, but the resulting good far outweighs the cost. We must end "the hell where youth and laughter go" forever so that generations can grow to learn to live together in a world of conflicting interests, loyalties, and messages. The beginning of the end of this insanity certainly lies in remembrance, but as one author said "vision without execution is hallucination." This isn't a movie, it's life. Remember, yes. And then change! Thanks, Fr. Malone.

Thank you for this article about The Great War (hypothetically, the "war to end all wars"). From my perspective it was a reminder of the similarities between learning in our global society and learning by an individual. The article also served as a reminder about the fundamental differences between those who adopt a "short term" memory approach in lieu of "long term" memory approach as it pertains to social and political strategy in our global society.

On an individual level, the human mind requires both short-term and long-term memory to function and to accomplish tasks in the present. However, the short-term memory needs the depth of understanding that long-term memory provides in the human experience. Thus, the experiences learned from short-term memory and then transferred and stored in long-term memory becomes the voice for rational decision-making in the present and future. For example, an adult person who has lived the experience in youth of what happens when his/her hand is placed on a hot stove only to get burned will not make the same mistake twice. Sadly, this application of the "lesson learned" gets missed in our global society when watershed opportunities for change are ignored, forgotten, or completely re-written from a perspective which is self-serving and full of hidden agendas.

Some in our global society, namely, dyed in the wool Trump-worshippers, chose to ignore, discard, or re-write the learned experience of history. That group tends to mislabel themselves as being progressive-minded and future-thinking people who lack a depth of understanding about the consequences of actions taken in the past that led to disastrous outcomes. This "short-term" memory demographic relies strictly on the present circumstances and the here and now.

Others in our global society - historians and scholars - represent a long-term" memory demographic and emphasize the need to preserve the context and understanding of significant events in our global society's past. This group appreciates how these watershed moments in history possess the ability to bring about incremental social change. It matters not whether one believes that history repeats itself, or, believes that history doesn't repeat itself but it often rhymes. Facing the consequences of history, learning from it, and deploying ideas for effective policy change based on the cautions of learned experiences from the past serves as a "less reckless" approach for the present and future.