5 years in, what I've learned as the editor of America 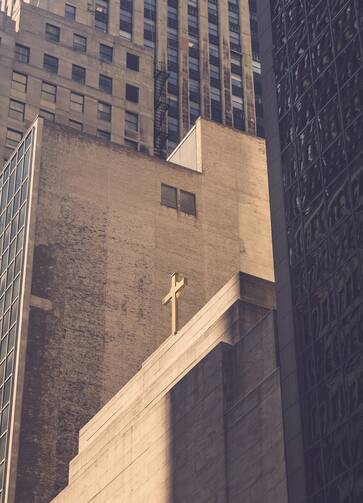 I am writing this column on the fifth anniversary of my first day as the 14th editor in chief of this magazine. In truth, I can hardly believe that it’s been only five years. During these 1,825 days, the pace and breadth of change in the worldwide church and in our tiny corner of it here in New York has been simply astounding.

The year 2012 was before “Who am I to judge?” before “Laudato Si’” and “Amoris Laetitia”; before the controversial dubia; before Indianapolis (against every expectation) received a cardinal’s red hat, while Milan did not.

It’s been quite a journey. Thank you for walking with us every step of the way. These five years have also been transformative for us. In 2012, America had 16 full-time employees. Today, we employ 43. Our online readership is four times what it was in 2012, and we currently have the largest number of print subscribers in 15 years. We’ve redesigned and relaunched our print edition and website, launched a film division, started a media fellowship for young professionals, debuted a weekly radio show, rebooted the Catholic Book Club and recruited a worldwide network of correspondents and contributing writers. All of that was possible because of you, the most loyal and generous readers in publishing. On behalf of our directors and staff: Thank you.

These five years have also been transformative for us.

At the end of this month, America Media will move to our new headquarters at 1212 Avenue of the Americas, a state of the art facility designed specifically for this new America. The move will mark the end of the beginning of our transformation into a 21st-century multiplatform media ministry. You are welcome to drop by and visit if you’re ever in New York. It’ll be easy to find us. Our new headquarters will be right across the street from the Fox News broadcasting center (insert witticism here). Also nearby are NBC Studios and Rockefeller Center, as well as The Wall Street Journal and the studios of Sirius Radio. St. Patrick’s Cathedral is a block away. St. Ignatius always said that Jesuits should be at the center of things, right at the intersection of the church and the world, interpreting one for the other.

“And so America set up shop overlooking the public square,” I wrote in my first column as editor in chief, “right at the corner of the church and the world. The object was threefold: to assist with the faith formation of American Catholics, the evangelization of American culture and the progress of America’s civil society. Thus, our name. In 1909—when the nation’s Catholic citizens were viewed with disdain—this kind of intellectual apostolate was especially needed. For different but no less daunting reasons, this apostolate is still needed today. The U.S. body politic, sickened by the toxin of partisanship, needs the elixir of charity and clarity. The body of Christ also needs healing, torn asunder as it is by scandal and ideological divisions that thoughtlessly mimic their secular counterparts.

“America neither pretends nor aspires to be the solution to these problems. We simply hope, as our forebears did, that our review—in print and online—will serve as one model of a truly Catholic as well as a truly American public discourse, one marked by faith, hope and charity.”

With this issue, America launches a new occasional section called Faith & Reason. which will feature articles about contemporary theological or ecclesial questions, usually by prominent theologians. The Rev. Robert Imbelli kicks off the new section in this issue. America has always published such articles, but in the new magazine design we launched last January, it wasn’t obvious where they should be housed. These more scholarly and explicitly theological essays had a home neither in the features section, which houses mostly reported articles by professional journalists, nor in the Faith in Focus section, which features mainly first-person essays about spirituality. At our last editorial staff retreat, we decided to create an entirely new section with its own heading, look and style—proof, if needed, that after five years in this job, I’m still learning. Thanks be to God.

I do wonder why America Magazine must be located on the Avenue of
the Americas instead of Newark among the poor and disenfranchised.
How it can take 43 paid employees to produce the magazine also baffles me.

Yes, vituperative comments should be moderated but no one should
have their comments deleted 'whole-sale' because they correct
progressive commentators with the simple facts of Church History
and Doctrine.

Thank you for the lively and informative articles! I have always enjoyed your columns. Best wishes for the future.

Well done Father Malone -had an impulse to call you Bishop! Well, who knows? I like what y'all using Georgia lingo, have accomplished and congratulate you and your Staff for creating an "open door" approach, through which a free flow of ideas and opinions are welcomed. This is music to the ears for those who have ears to hear as Jesus might say everything orchestrated under the baton of fidelity to Catholic insight, which like our Gracious God gently assures that "Mercy is above all His Works" truly a trusted Friend "ever ancient, ever new," like AMERICA Magazine! Again, Thanks!

What radio station[s] are you on? Congrats on your 5 years as editor. "America" online is gentler on the spirit , and definitely on ones ego, then other online magazines/blogs.

As a Roman Catholic, I don't want to be challenged every time I read "America". Theologically, I still believe what I was taught in the 1960s. Sex outside of a marriage between a man and woman is wrong, abortion is evil and a woman cannot be a priest. This magazine insinuates in every issue this can change like it did for the Protestants.
Wrong.