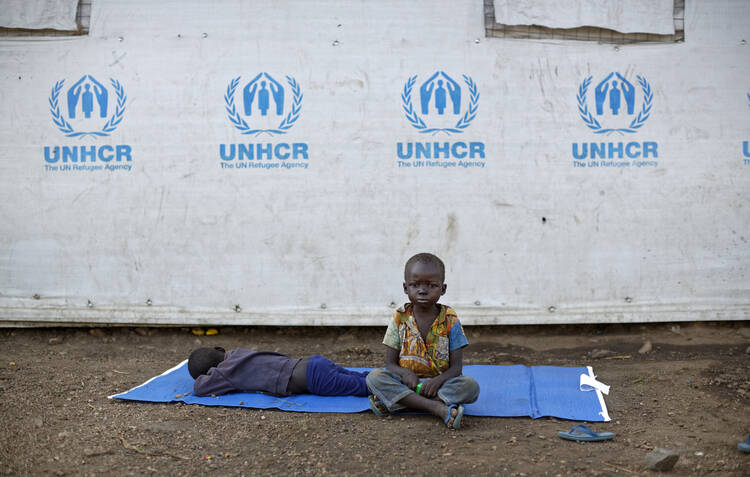 In this Friday, June 9, 2017 file photo, a South Sudanese refugee boy sits on a mat outside a communal tent while his brother sleeps, at the Imvepi reception center, where newly arrived refugees are processed before being allocated plots of land in nearby Bidi Bidi refugee settlement, in northern Uganda. AP Photo/Ben Curtis, File)

In his statement for next year’s World Day of Migrants and Refugees, Pope Francis has offered a series of concrete proposals for world leaders to consider when drafting two forthcoming United Nations’ agreements.

The pope’s message marks a break from past years, in which his remarks for the commemorative holiday, established by Pope Pius X in 1914 and celebrated each January, have focused on asking world leaders to come together to solve the migration crisis. Before his retirement, Pope Benedict XVI also used the World Day of Migrants and Refugees to call for such a global dialogue.

“Our shared response may be articulated by four verbs: to welcome, to protect, to promote and to integrate.”

At its summit in New York last fall, the United Nations resolved to draft two compacts, or negotiated agreements, outlining countries’ obligations to migrants and refugees. Now that the consultation phase for these compacts is underway, the pope is using this year’s message to go into more detail about what he hopes to see included in the agreements.

The pope reiterated his message from February at an international forum on migration and peace that “our shared response may be articulated by four verbs: to welcome, to protect, to promote and to integrate” migrants and refugees.

The pope called for better options for refugees to legally resettle, including simplified processes for humanitarian visas and sponsorship programs for refugees, along with “adequate and dignified” accommodation and services when people first enter a new country.

Pope Francis also denounced both the detention of people who enter countries without authorization and “collective and arbitrary” deportations, particularly when migrants’ human rights were threatened in their home countries.

“The principle of the centrality of the human person...obliges us to always prioritize personal safety over national security.”

“The principle of the centrality of the human person, firmly stated by my beloved Predecessor, Benedict XVI, obliges us to always prioritize personal safety over national security,” Pope Francis wrote.

The pope asked that migrants’ rights be protected beginning in their country of origin and continuing into the countries that welcome them. The countries of origin, the pope said, should provide reliable information before departure and protection from recruiting practices that could lead to human trafficking or unfair labor conditions. In their new countries, migrants should be guaranteed a range of services including legal assistance, the possibility of opening a bank account and a monthly minimum wage. They should enjoy freedom of movement, work opportunities and access to communication tools, “out of respect for their dignity,” the pope wrote.

Pope Francis insisted that children should not be detained because of their migratory status.

Pope Francis also emphasized the need to respect the rights of children, from their right to a nationality at birth and foster care services to access to primary and secondary education and the option to continue their studies in their adopted countries. He insisted that children should not be detained because of their migratory status and that they should be guaranteed the right to remain when they come of age.

According to Pope Francis, “Promoting essentially means a determined effort to ensure that all migrants and refugees—as well as the communities which welcome them—are empowered to achieve their potential as human beings, in all the dimensions which constitute the humanity intended by the creator.”

Pope Francis cited St. John Paul II’s last World Day of Migrants and Refugees message, saying that integration “is not an assimilation that leads migrants to suppress or forget their own cultural identity;” instead, the arrival of migrants is an opportunity to enrich both migrants and the countries that welcome them. Pope Francis said this process takes a long time but could be accelerated by granting citizenship without language requirements, compiling best practices for integration and offering more opportunities for intercultural encounters, among other initiatives.

The impact the pope’s statement will have on the United Nations’ negotiations remains to be seen. The Holy See has been a “permanent observer” with no voting power since 1964, though it was given temporary voting status for a vote on nuclear disarmament earlier this summer. (The Vatican voted in favor of disarmament.) Whether or not the Holy See is given another chance to vote, as a permanent observer, it does have the ability to weigh in on negotiations like the ones happening now that will shape the United Nations’ official stance on migration and refugees.

Personally, I am having a great deal of difficulty in accepting Francis as the Vicar of Christ and let me give my reasoning. Firstly, this article, and the statements contained within, do smack of the so-called Liberation Theology which is actually Communism/Socialism with a Christian face so as to provide moral authority and is not truly Christian but is co-opting Christ for a personal and worldly political viewpoint and thus being heretical in nature. Secondly, it would be amusing if not so mindless and achristian to somehow consider the poor of the immigrants to have priority over the native poor in a given country. Does not charity begin at home ? Goodness, apparently this is not true when you are Francis. Thirdly, the Vatican warns of mixing politics and religion, at least, the style of politics which are not considering to be in agreement with Rome but, as we see in this case, political meddling is now, and somehow, moral. Politics and religion mix but only when they are those of the current Pontiff. Again, this is not from Christ. Fourthly, has deep and reflective thought ever been utilized in regard to any of these issues for a meaningful period of time? Open borders with little in the way of checks and balances and with happy economic results for all does sound like a type of kind and well meaning but childish delusion of a poorly schooled four year old. Note that this is not from the love of a child but more along the lines of, "Why can't every meal be ice cream?". Lastly, I am appalled by the corruption of Sacred Scripture which is ongoing . To wit, The Parable of the Good Samaritan is being used and abused as reason to make SOMEONE ELSE pay for the unfortunate person in distress and lying on the road but only when certain parameters of the individual are met, those being the trends of the current year. (Undocumented worker lying in the ditch deserves assistance, local worker, not nearly so much.) These are diificult issues necessitating ongoing dialogue and not meaningless platitudes.

I don't recall Matthew 25 having the kind of stipulations you seem to want to put on who is fed, given a drink, clothed etc that Jesus named in it. I don't recall saying that only those of your own neighborhood or country came first. Apparently this blue print on how to be a Christian has little meaning to you. Also, Pope Francis, just like all popes I have known in my lifetime, was duly elected by a duly convened conclave. I do believe that makes him, among other titles, Vicar of Christ whether you, I or anyone else objects to that IF you are a believing Catholic.