In Myanmar, Pope Francis’ words will be monitored closely 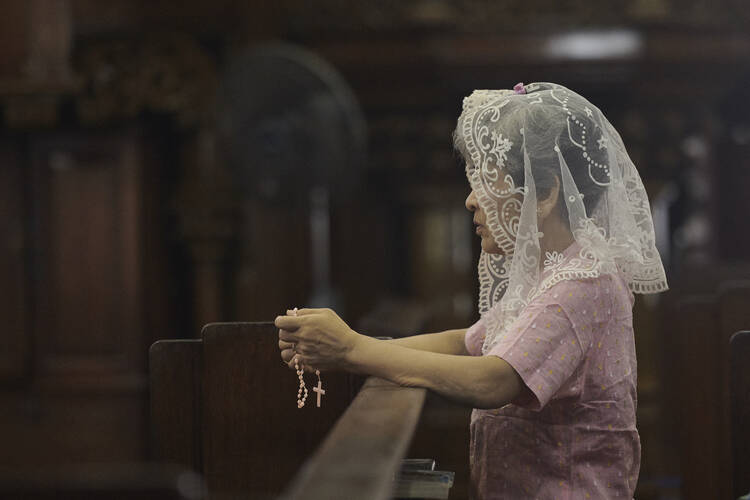 YANGON, Myanmar (CNS) -- When Pope Francis visits Myanmar in late November, church leaders will be listening nervously to his every word, specifically hoping they don't hear the R-word. Any mention by name of the Rohingya, a Muslim group widely hated in this predominantly Buddhist country, will have widespread implications here.

"The pope's visit is keeping us very anxious, as many things can go wrong. A wrong word from the Holy Father can plunge the country into chaos," said Father Mariano Soe Naing, communications director for Myanmar's bishops.

"If the Holy Father in his speech evens mentions the Rohingya, the nationalist groups will respond. This is a historic problem, and we need a lot of time to solve this problem. We cannot just say this or that. That is the reason why Aung San Suu Kyi cannot say anything," he said, referring to the de facto leader of Myanmar's civilian government, who has been criticized internationally for failing to speak out against the military's actions against Rohingya in northern Rakhine state.

Father Soe Naing told Catholic News Service that while the bishops support democracy and back Aung San Suu Kyi, they understand her silence on the Rohingya.

"Aung San Suu Kyi has no right to comment on anything. The military has the authority to decide everything."

"Aung San Suu Kyi has no right to comment on anything. The military has the authority to decide everything," he said. "The whole world wants to criticize her, wants her to fight against the military in favor of full democracy. But that's a fight she cannot win. She might have the force of the people behind her, but the bloodshed would be terrible. The blood would flow like rivers in this country. The military is not ready to give up easily. She knows that well."

The Asian church news agency ucanews.com reported the country's Catholic bishops told the papal nuncio in June that they would prefer Pope Francis avoid mentioning the Rohingya by name.

More than a million Rohingya live in Myanmar, but they are widely seen by the government and the majority Buddhist population as foreigners, and they are frequently referred to as "Bengalis."

On Aug. 25, Muslim separatists launched a series of attacks on government security forces in Rakhine. The Myanmar military launched a fierce counterattack. On Oct. 18, Amnesty International issued a report blaming Myanmar's military for a "targeted campaign of widespread and systematic murder, rape and burning" in Rohingya communities in the region.

More than half a million Rohingya refugees have fled across the border into neighboring Bangladesh, where UNICEF, in an Oct. 20 report, said conditions resemble "hell on earth," particularly for refugee children.

"When the Holy Father said that we should pray for the Rohingya, people were really angry."

Despite the caution urged by bishops here, Pope Francis has mentioned the Rohingya by name.

"I would like to express all of my closeness to them," he said Aug. 27, asking pilgrims at the Vatican to pray for "the Lord to save them, to raise up men and women of goodwill to help them, that they may be given full rights."

"When the Holy Father said that we should pray for the Rohingya, people were really angry, because it was Burmese police posts that were attacked, and people died. The pope didn't mention the terrorist attacks when he asked people to pray for the Rohingya. Why did he leave out the rest of the people who suffered in this country?" Father Soe Naing said.

"Our people do not want to hear the word 'Rohingya.' We are not allowed to use it in our country. If the Holy Father comes and begins to speak about this conflict, then the nationalists may rise up against him. That is our fear. But we believe that the Holy Father knows what to say and what not to set say. We trust in his wisdom," the priest said.

Myanmar priest: "If the Holy Father comes and begins to speak about this conflict, then the nationalists may rise up against him."

"When the pope said something about the Rohingya, some of the Buddhist nationalists got very angry. But people tend to forget after two or three weeks. There are new things to get excited about on Facebook and in the media," he said.

Words have tremendous power in a county where people still argue whether they should call themselves Burma, a name dating to British colonial rule, or Myanmar, which was adapted by the country's military in 1989 in response to pro-democracy demonstrations.

"Politicians are good at these things, and I hope that our pope will be sensitive in his public statements," he said.

A Protestant leader said the pope's visit would affect more than just Catholics.

"When the pope comes it will not just benefit the Catholics, but the whole Christian community. And if something goes wrong, it is not only the Catholics who will suffer."

"In general, people don't know the difference between Catholics and Protestants, so when the pope comes it will not just benefit the Catholics, but the whole Christian community. And if something goes wrong, it is not only the Catholics who will suffer," said Patrick Loo Tone, president of the Myanmar Council of Churches.

"There are tens of thousands of Catholics who want to come see and hear the pope, because it's the first time that the pope has come here. They have asked us to help, and we're opening our churches and other buildings to offer hospitality. And many Buddhists, including some of the big monasteries, are also offering their spaces. Some might see the pope's visit as possibly negative, but I believe God will make it a positive experience for everyone."