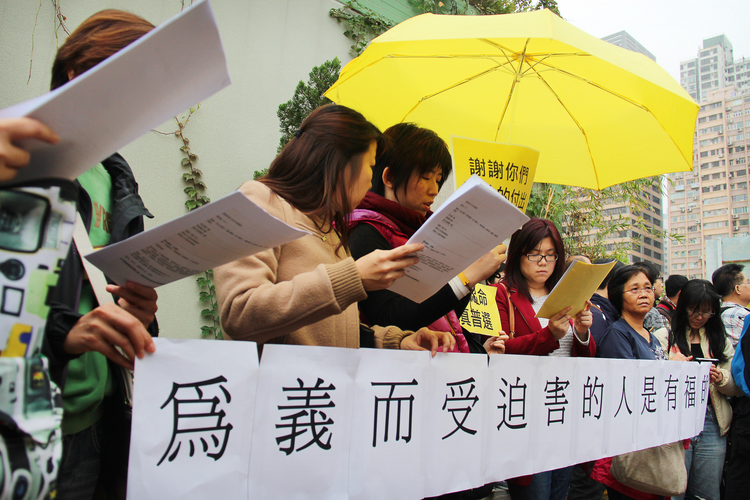 Hong Kong residents hold a banner that reads: “Blessed are those who are persecuted for righteousness’ sake.” The Occupy Central movement was initiated as an effort to force the Hong Kong and Chinese governments to allow true democracy in the city. (CNS photo/Francis Wong)

When three young activists were sent to jail for unlawful assembly in August, the presiding judge accused “learned figures” of inciting students to protest. Since then it has been widely expected that a Yale-educated sociology professor will face his own sentencing early next year. But Professor Chan Kin-man remains undeterred.

“I’ve been prepared for this for so long, I really have a sense of peace,” said the 58-year-old academic, who has devoted himself to the fight for democracy for Hong Kong and China.

“I even believe it’s essential for some people to go to jail for the sake of democracy. It will in the end strengthen the movement.”

“I believe it’s essential for some people to go to jail for the sake of democracy. It will in the end strengthen the movement.”

The demonstration was sparked by Beijing’s ruling in August that year that Hong Kong people could only vote for the city’s chief executive from a list of pre-approved candidates by Beijing authorities. The movement hoped to pressure the Chinese government into granting an unfettered vote to Hong Kong, as promised in an agreement made before Britain’s handover of the territory in 1997.

But the government refused to offer any concessions. Two months later, the trio, along with dozens of other participants in the protest, including Cardinal Joseph Zen, the bishop emeritus of Hong Kong, turned themselves in to the police, admitting to participating in an unauthorized assembly. They said the surrender was “a silent denunciation of the heartless government” and urged protesters to abandon their occupation of the business district.

Since then, many in Hong Kong have become increasingly frustrated with mounting interference from the mainland, and a growing number of young people are now calling for independence from China.

As China tightens its grip on the city, Mr. Chan sees his possible incarceration as an inevitable step in Hong Kong’s long struggle for democracy. He believes that throughout history, democracy has been gained only through struggle and that society needs courageous people who are not afraid to stand up to dictatorial regimes.

“It’s a blessing that there are people like me who are not scared,” he said.

As a student in the late 1970s, he admired Beijing activist Wei Jingsheng and Taiwan activist Shih Ming-teh, who went to jail in their pursuit of democracy. Mr. Wei, who now lives in exile in the United States, spent a total of 18 years in prison because of his involvement with the Democracy Wall movement in 1978. Mr. Shih, a political prisoner for almost 26 years before Taiwan abolished martial law and democratized, became a prominent politician after his release in 1990.

“Shih even laughed in court…that picture was ingrained in my mind for so many years,” Mr. Chan said. Mr. Shih had been tried and sentenced to life in prison after a pro-democracy protest in 1979 he helped to organize that became known as the Kaohsiung Incident. “I believe all these brave people were fighting for me, and I want to be part of it.”

Mr. Chan has already paid a heavy price for his advocacy for democracy.

Before he took up an invitation from Mr. Tai to co-found the pro-democracy campaign, he had been an academic who had dedicated his career to researching civil society in China. He was often invited by universities and state institutions to give talks and offered advice to the N.G.O. community. He was even trusted enough by the Chinese government to be among those who met with senior Chinese officials to discuss the reform of legislative elections in Hong Kong in 2010.

His decision to start the Occupy campaign put an abrupt end to all of that.

In June 2013, three months after he, Mr. Tai and Mr. Chu announced their decision to launch the Occupy Central movement, he was told that a talk he was scheduled to give in Shenzhen, the Chinese city neighboring Hong Kong, had been canceled. He later learned that the event went ahead with a different speaker and that police in the southern province of Guangdong had banned all institutions from hosting him. He was also warned by associates in the Chinese government that he had become persona non grata and should refrain from visiting mainland China.

This was a tough blow, as it meant Mr. Chan had to give up his lifelong dedication to developing civil society in China—an ideal based on his conviction that a mature civil society would lay a solid foundation for democratization. But since 2013, “civil society” has become a politically sensitive term in China. Amid tightened ideological restrictions, the authorities launched a sweeping crackdown on certain institutions of civil society, closing many independent nonprofit organizations, arresting prominent N.G.O. representatives and imposing draconian restrictions on foreign N.G.O.s.

Mr. Chan has since severed his links with the N.G.O. community in China, as any connection with him would subject groups or individuals to scrutiny from the authorities.

His activism has also put tremendous strain on his family. Shortly before the Occupy Central movement started, he noticed unidentified men staking out his housing compound around the clock. He was followed and noticed strangers taking pictures of him and his daughter. He has also received hate letters, including death threats and letters containing razor blades.

The pro-Beijing press in Hong Kong has also been running a ferocious campaign against him and the other Occupy Central founders, accusing them of inciting violence and colluding with “foreign forces” to damage Hong Kong’s stability.

His 89-year-old father, who escaped from China to Hong Kong in his youth, was not supportive of his pro-democracy activism, and the two rarely spoke until recently. Anticipating his own jail term, which he believes could last up to three years, Mr. Chan reached out to him and reconciled.

Mr. Chan lamented Beijing’s refusal to allow Hong Kong people to freely elect their leader even as the city has reached what he considers the basic conditions for democracy: a mature civil society, the rule of law, an efficient civil service and a middle class.

“Hong Kong has reached the stage where it needs to democratize,” he said. “Not allowing democracy is leading to conflicts.”

Occupy Central was forced to end without any compromise from the government. Mr. Chan expected that might mean growing discontent that could lead to social unrest.

During the Chinese New Year holidays in early 2016, violent clashes indeed broke out in a downtown area after a government crackdown on street hawkers. Police used batons and pepper spray and fired warning shots while protesters threw bricks and glass bottles and set fires on the streets.

“We knew that if [the Occupy Central campaign] failed, there would be riots, but we thought it would come earlier, maybe even in 2015,” he said.

Beijing authorities appear determined to head Hong Kong away from more democratic expression. Pro-independence candidates in Hong Kong are barred from running in legislative elections, protesters and activists are increasingly prosecuted and jailed, and pro-independence banners are quickly removed, even on university campuses. China has ordered Hong Kong to step up “patriotic” education and plans to extend its laws on national flags and the national anthem to Hong Kong. Hong Kong media outlets and universities are increasingly subject to China’s influence.

“They would not be happy with just jailing us for a couple of years, they want to implement Article 23,” Mr. Chan said, referring to a subversion law that Beijing has been pushing the Hong Kong government to enact that would give broader powers to authorities to curtail political expression.

“I expect they would step up control… and many more rights will be eroded in the coming five years,” Mr. Chan said. “I am pessimistic about the overall situation, but Hong Kong people will continue to fight.”

In May 2013, the Chinese Communist Party issued an internal edict known as Document No. 9, condemning seven subversive influences on society, one of which was “advocating civil society and attempting to dismantle the ruling party’s social foundation.” Others included promoting “Western constitutional democracy” and “universal values” of human rights and free speech. N.G.O. workers, human rights lawyers and other government critics have been accused of colluding with “foreign hostile forces.”

Mr. Chan predicts the conflict between the government and Hong Kong people who clamor for democracy will not end with the jailing of activists but is likely to escalate. “Hong Kong is quite contrary to the way [President Xi Jinping] rules China,” Mr. Chan said.

Unlike several key figures of Occupy Central, Mr. Chan is not a Christian, but he said the spiritual dimension is very important in the campaign, which emphasizes nonviolent civil disobedience, peace and love.

“We stress peace, a spirit of sacrifice, citizens’ responsibilities. We chose to have our first press conference at a church with a cross in the background. We hope values like love and peace could support this movement.”

Even under the shadow of a prison term, Mr. Chan will not give up his dream of a democratic China and Hong Kong.

“It’s like a calling,” he explained. “Hong Kong is facing a serious crisis and it’s the place that nurtured me and brought me up…. I feel I owe it to Hong Kong.”