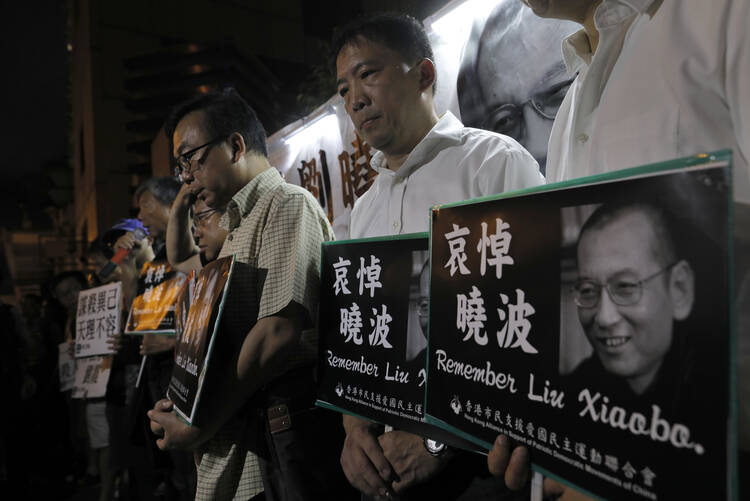 Chinese Nobel Peace Laureate Liu Xiaobo, who dedicated his life to the mission of fighting for democracy and freedom in China, died of liver cancer on Thursday. He was 61.

Mr. Liu was the first Nobel Peace Prize winner to die in state custody since journalist Carl von Ossietzky died in a prison hospital in 1938 under Nazi Germany.

The judicial bureau in the northeastern city of Shenyang said on its website late Thursday that Mr. Liu, who was sentenced to 11 years in jail in 2009 for “inciting subversion of state power,” succumbed to multiple organ failure.

He remained tightly guarded until his death. Although he was transferred from prison to hospital on medical parole, he and his family were barred from communicating with the outside world.

Upon the news of his death, Berit Reiss-Andersen, chair of the Norwegian Nobel Committee, condemned China’s treatment of Mr. Liu, saying it was “deeply disturbing” that he was not transferred to a facility where he could receive adequate medical treatment before he became terminally ill.

“The Chinese Government bears a heavy responsibility for his premature death,” she said in a statement. “While the whole world watched, China chose instead to maintain the isolation of its prisoner.”

Historians and human rights activists say an intentional delay in treating the illnesses of political prisoners fit a historical pattern of behavior of Chinese authorities. But at a late night press conference on Thursday, doctors at the First Hospital of China Medical University, where Mr. Liu was treated, argued that his cancer was only discovered in early June, after he complained about abdominal discomfort. They also insisted that even though Mr. Liu expressed a wish to seek treatment abroad, his liver was bleeding, so it was impossible for him to travel.

Mr. Liu’s death has effectively silenced a vocal critic of the Chinese government who has for decades advocated non-violent resistance against a one-party dictatorship. Mr. Liu had been a prominent figure during the student-led Tiananmen pro-democracy protests that swept Beijing and other Chinese cities in 1989.

He was locked up four times in his life, starting with a jail term on “anti-revolutionary” charges after the crushing of the Tiananmen pro-democracy movement. In his final statement to the court in 2009, which he was barred from reading aloud in his trial, he said he was “led onto the path of political dissent by the psychological chains” of the June Fourth Incident, as the Tiananmen massacre is referred to in China.

Even after his release in 1991, he was subjected to year-round monitoring. He was again held by police under “residential surveillance” from May 1995 to January 1996.

At the end of that surveillance, he continued writing essays critical of the government. In October 1996 he was sentenced to three years in a “re-education through labor” camp on charges of “spreading rumours and libel” and “disturbing public order.”

A former lecturer at Beijing Normal University, Mr. Liu was a key drafter of the Charter 08 manifesto, which called for sweeping political reform, democracy and respect for freedoms and rights in China. The manifesto, initially signed by some 300 intellectuals and human rights advocates, sought the end of one-party rule and the building of a “federal republic of China under a democratic and constitutional framework.”

Mr. Liu was awarded the Nobel Peace Prize in 2010 for what the committee described as “his long and non-violent struggle for fundamental human rights in China.” Already incarcerated for almost two years at the time, his absence was marked at the prize ceremony by an empty chair.

Analysts and Mr. Liu’s friends say the Chinese government saw him as a huge threat to the regime and was anxious that, if freed, his stature would enable him to spark a new round of pro-democracy agitation in China.

“Even though he doesn’t consider them his enemies, it is possible that the rulers see him as an enemy,” said Xu Youyu, a Chinese scholar in philosophy currently a visiting professor in the United States.

Before losing his freedom for the fourth time, Mr. Liu still insisted he has no regrets.

“I have no enemies and no hatred,” he said in the statement that he was barred from reading in court. It became instead the speech read at Nobel award ceremony in 2010.

“I look forward to the day when my country would be a land where opinions could be freely expressed,” he said. “Here, different values, thoughts, beliefs, political views will be allowed to compete and coexist...particularly political views which differ from the authorities.”

“I hope I’ll be the last victim of China's unending imprisonment of writers and no one else will be made a criminal for what they say.”

Unfortunately, Mr. Liu was not the last victim, and he lost freedom for the rest of his life as a price for his convictions. On his deathbed, his personal dream of a more tolerant, liberal and democratic China died with him. Now others will have to dream it for him.