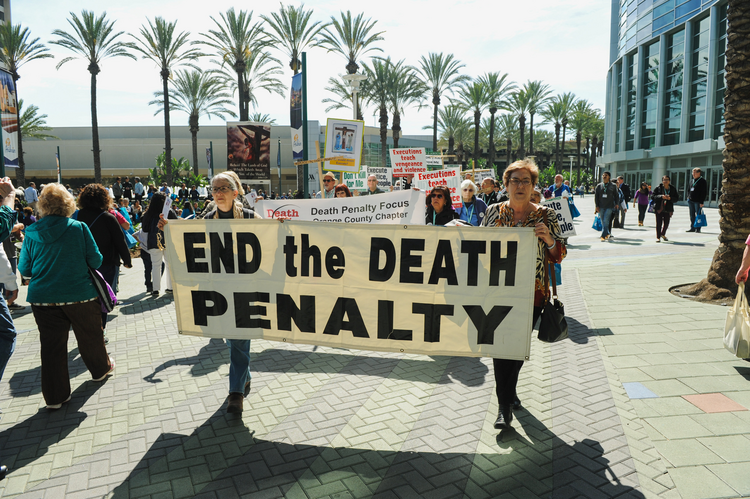 Advocates for the abolition of capital punishment in the United States were cheered by the pope’s clear instruction against the continued use of the death penalty on Oct. 11 as “contrary to the Gospel.”

“We absolutely welcome the pope’s strong statement on this issue; we welcome the moral clarity and the leadership he is showing,” said Diann Rust-Tierney, the executive director of the National Coalition to Abolish the Death Penalty.

“We’ve got to show people that there is a better way, that this is a fundamentally immoral practice,” she said, describing all the controversy that swirls around executions in the United States as symptoms of that immorality. “You know sometimes we struggle in the wilderness.

“This is encouraging us in the United States to really push this forward; this is really the wind at our backs.”

During ceremonies at the Vatican commemorating the 25th anniversary of the promulgation of the Catechism of the Catholic Church, Pope Francis reiterated and expanded on the church’s rejection of capital punishment. “However grave the crime that may be committed,” he said, “the death penalty is inadmissible because it attacks the inviolability and the dignity of the person.”

“We absolutely welcome the pope’s strong statement on this issue; we welcome the moral clarity and the leadership he is showing.”

He said, “The death penalty is an inhumane measure that humiliates, in any way it is pursued, human dignity,” adding, “It is, of itself, contrary to the Gospel because it is freely decided to suppress a human life that is always sacred.

“In the final analysis,” Pope Francis said, “God alone is the true judge and guarantor.”

“I think the pope now makes it absolutely clear, without any doubt that the death penalty is contrary to the message of the Gospel,” said Archbishop Emeritus Joseph Fiorenza, a former president of the U.S. bishops’ conference and former leader of the Archdiocese of Galveston–Houston. The archbishop has long advocated the abolition of the death penalty in the United States.

Though he personally believed that the church had already been clear in its rejection of capital punishment, “there were some,” the archbishop said, “who thought there was some wiggle room about it” because of the wording of the catechism.

“I think the pope has now put that to rest,” Archbishop Fiorenza said. “This is Pope Francis’ magisterial teaching on this issue and as the faithful we have the responsibility to accept what the pope says.

“And I have no doubt,” he added, “that this is what Pope Francis has felt all along. I am absolutely gratified and pleased with his statement.”

“I am grateful [Pope Francis] brought up the issue of the death penalty, especially in the context of the catechism,” said Brownsville, Tex., Bishop Daniel Flores. That suggests, he said, that “there is going to be some kind of reconsideration of the language” on capital punishment in the catechism.

Bishop Flores is the episcopal advisor for the Catholic Mobilizing Network. The C.M.N. has been working closely with the U.S. Conference of Catholic Bishops to raise awareness about capital punishment in the United States and lobby against its use.

The bishops’ conference, he pointed out, has long spoken out against capital punishment, even if that message has not always been accepted by some Catholics. The pope’s instruction, Bishop Flores said, makes his job of persuading American Catholics against the use of the death penalty a little easier. “This puts it back on the table, and we are all going to have to be thinking about it.

“Any time Rome says something,” he added, “It helps.”

The specific wording in the catechism on capital punishment has changed in recent years as the church began to articulate a more restrictive view of the moral acceptability of its use. According to the catechism, the use of the death penalty is permissible only when the identity and responsibility of the condemned is certain and if it were “the only possible way of effectively defending human lives against the unjust aggressor.” After St. John Paul II issued his encyclical “The Gospel of Life” in 1995, the catechism was amended in 1997 to specify that the such a condition appeared rare, “if not practically non-existent.”

Opponents of the death penalty frequently pointed out in the years since that the standard established by John Paul II has been essentially impossible to meet in societies with modern facilities for the incarcerated. But to some minds the catechism still left open the possible licit use of capital punishment.

The pope’s new instruction “just closes the loophole,” Karen Clifton, the executive director of the Catholic Mobilizing Network, said. “This is against the Gospel; he makes it very clear, and it makes our pro-life teaching consistent.”

Some critics of the pope complain that this latest revision suggests an alteration of irreformable doctrine. Ms. Clifton does not see it that way. “The church’s teaching,” she said, “hasn’t changed because it has always been pro-life—from conception to a natural death—and the death penalty is not a natural death.

“It is a homicide, and that is how it is listed on the death certificate.”

The church has taught that the response to a grave harm must be retributive, “but it also has to be restorative,” said Ms. Clifton. “The death penalty is not restorative.” In fact, it negates the potential of restoration, Ms. Clifton said, a process that can only happen in God’s time.

“We can still be tough on crime,” she added, but the experience of nations around the world has been that society can protect itself without resorting to executions.

While the pope’s latest comments on the death penalty were surely aimed at the United States, the only Western state that still executes people convicted of capital crimes, Bishop Flores said that the instruction is also intended for a global audience, especially in those nations where Christians are a minority and may face the prospect of capital punishment simply because of their faith.

Ms. Clifton believes the pope’s comments should invigorate Catholic efforts toward the abolition of the death penalty.

As more U.S. Catholics become active against capital punishment, she believes the church could have an impact in reducing the number of executions taking place. That number has declined substantially in recent years as execution methods have been challenged and miscarriages of justice in capital cases have been exposed.

“We need Catholics to exercise their citizenship on this issue,” Ms. Clifton said. A recent vote at the United Nations suggests the hard path may ahead in changing hearts in the United States. The United States voted on Oct. 5 against a U.N. Human Rights Council resolution condemning the use of the death penalty as a punishment for "apostasy, blasphemy, adultery and consensual same-sex relations,” apparently fearing the resolution would undermine the institution at home. It was the only Western nation to do so.

“That’s how wedded we are as a country to the death penalty,” Ms. Clifton said. She is eager to take a revitalized message against capital punishment to the broader U.S. public.

This is a countercultural message, she allows. But “Jesus always met people where they were at, and he moved them toward healing and wholeness; the Scripture is filled with sinners and God’s healing love.”

“We need to meet people where they are and move them toward mercy and away from vengeance,” Ms. Clifton said.

Read a great "How To" book on ways to organize religious and grass roots groups to save and exonerate innocent people on death row and end the death penalty in your state. The book is titled: "Till Justice is Done - 2013 edition." by Diana Eiranova Kyle. According to Presidential Medal of Honor winner Dolores Huerta, who uses this book at her foundation to teach organizing strategies, "Diana is a precious non-violent warrior for justice whose work is largely responsible for ending the death penalty in Illinois."

I'm very pleased that Pope Francis is again strongly speaking out against killing serious criminals by capital punishment. I have been a pen pal with a man who has been sentenced to life imprisonment at Graterford Prison in Philadelphia. From our years of correspondence, I'm convinced that he's reformed his life. According to a recent Pew survey, the number of people who support capital punishment has declined from 56% in 2015, to 49% at present. 42% of the public oppose killing by the death penalty. I was encouraged to find that 48% of Catholics oppose the practice, a greater percentage than the public at large. I only hope that more Americans see the violence of abortion as immoral, but come to recognize the need to restore legal protection to innocent unborn human beings, as well as provide more practical, compassionate alternatives to abortion for women in need.

The interesting question is: has the Church been wrong on issue of the death penalty as morally acceptable up to now? Does it not humble all of us to think that our doctrines and dogmas can be off the mark for centuries until JPII and Francis take the final two steps [1995 and 2017] to reach the conclusion that the practice is categorically contrary to the teachings of Jesus Christ? By analogy, slavery was not condemned by the Church as intrinsically evil until JPII announced it to be so. Up to then, it was an accommodated practice practiced in centuries past even by Popes and within the Vatican States.

So, much of the backlash against Pope Francis’s pronouncement on the death penalty is due to a confusion on the mutability of non-essential doctrine. Perhaps too people desire certainty in a rapidly changing world. The question is whether the death penalty is within the “deposit of the faith.” The words of Jesus on the subject of retribution lead me to think not.