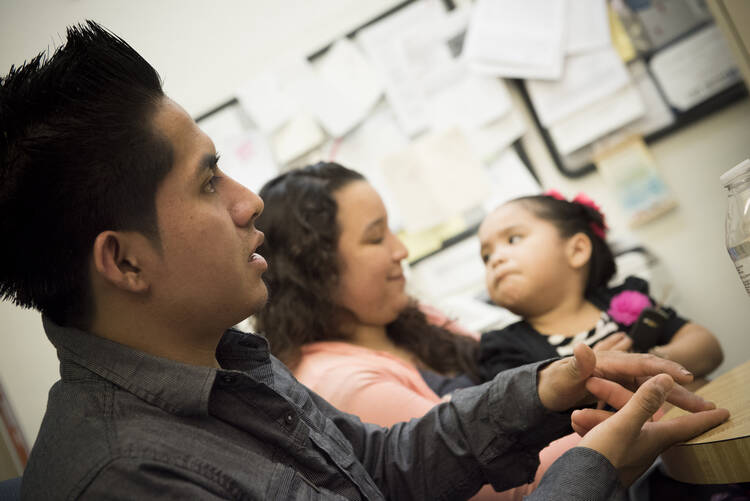 Here to Stay? Jose Aguilar, seen with his wife and daughter, sits for an interview. He was a child when he and his family entered the United States without legal permission. A Catholic Charities program in Trenton, N.J., helped him attain legal status.

Presidents of 27 Jesuit colleges and universities pledged themselves to “protect to the fullest extent of the law undocumented students on our campuses” and to “promote retention of the Deferred Action for Childhood Arrivals Program” in a statement released on Nov. 30. The presidents said they also would “support and stand with our students, faculty and staff regardless of their faith traditions” and work to “preserve the religious freedoms on which our nation was founded.”

The Jesuit statement, drafted last week, joins other recent position statements from university presidents who have taken a stand in support of the nation’s “dreamers,” young adults who had been brought without documentation into the United States as children. In the statement, released by the Association of Jesuit Colleges and Universities, the presidents wrote that “we feel spiritually and morally compelled to raise a collective voice confirming our values and commitments as Americans and educators.”

“Grounded in our Catholic and Jesuit mission, we are guided by our commitment to uphold the dignity of every person, to work for the common good of our nation, and to promote a living faith that works for justice,” the presidents wrote. “We see our work of teaching, scholarship and the formation of minds and spirits as a sacred trust.”

They said: “That trust prompts us to labor for solidarity among all people, and especially with and for the poor and marginalized of our society. That trust calls us to embrace the entire human family, regardless of their immigration status or religious allegiance.”

The presidents said that in addition to the spiritual and moral call to defend D.A.C.A., “experience has shown us that our communities are immeasurably enriched by the presence, intelligence, and committed contributions of undocumented students, as well as of faculty and staff of every color and from every faith tradition.”

The school presidents are making their sentiments on D.A.C.A. clear in anticipation of a crackdown on undocumented young people when President-elect Donald J. Trump assumes office in January. There is growing concern among undocumented students that the president-elect may follow through on campaign assertions that he would end D.A.C.A. and seek widespread deportations of undocumented U.S. residents. The D.A.C.A. provisions had been implemented by the Obama administration in an effort to address the special case of adults brought as children into the United States. Many technically face deportation to countries and cultures they have never known. Because of their lack of legal status, these young people find themselves unable to pursue higher learning or career goals after high school. Many Jesuit schools have been making efforts to assist such students.

In an attempt to head off the possible intervention against D.A.C.A. by the incoming Trump administration, Republican Sen. Lindsey Graham of South Carolina is readying legislation that would extend legal protections to the 740,000 young people who have been shielded from deportation by President Obama’s 2012 executive order.

Regarding a potential federal pushback against the institutions because of their stand on undocumented students once the new administration moves into power in January, A.J.C.U. spokesperson Deanna Howes said, “Certainly the presidents are aware of the political climate and things that are going on right now, but as the statement says: This is part of our Jesuit heritage and mission”—to support all students regardless of their legal status. She described the position as “very much in keeping with the character of Jesuit institutions.”

Signatories to the A.J.C.U. statement included all the members presidents with the exception of Boston College’s William Leahy, S.J.

Father Leahy had joined other Jesuit school presidents and scores of other presidents at Catholic colleges and universities supporting D.A.C.A. in a statement also released on Nov. 30 by the Association of Catholic Colleges and Universities. He had also previously signed a similar statement released through Pomona College in California which included the signatures of presidents of more than 400 college and university presidents from public and private institutions across the country.

Correction: This article was updated at 11:57 a.m. on Dec. 2 to correct the name of a source, Boston College spokesperson Jack Dunn, originally reported as "Joe Dunn."

@ClarkeAtAmericaclarke@americamedia.org
Show Comments (
2
)
Comments are automatically closed two weeks after an article's initial publication. See our comments policy for more.
John Walton
6 years 2 months ago
My solution -- keep everyone. It would serve the entire world well to consider that all the poor Greeks remain in Greece, not Astoria or Manhasset NY. All the poor Haitians and Dominicans are on their island, the poor Cubans are in their island retreat, not Miami or Holmde NJl. Nigerians and Ghanains in our parish are doing quite well, their brethren in West Africa in rags. Why not export the concept of economic lliberalism to all the countries who now export their human capital, their most precious resource.
L J
6 years 1 month ago
Americans need immigrants to save us from ourselves.