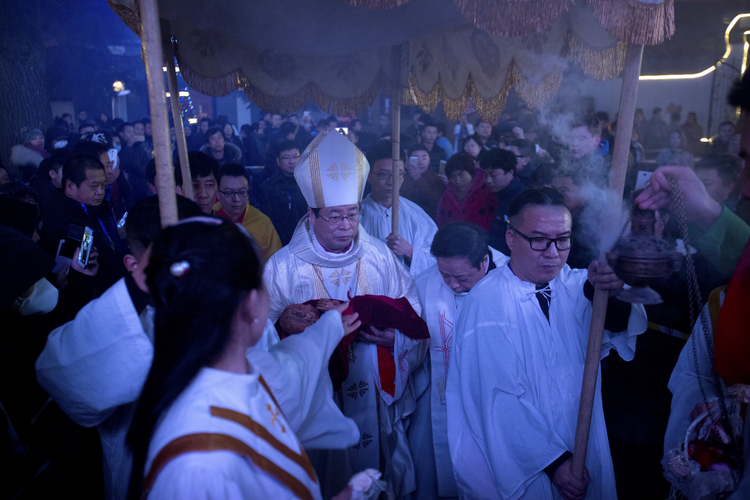 In this Dec. 24, 2015 photo, Chinese bishop Joseph Li Shan, center, arrives for a Christmas Eve mass at the Southern Cathedral, an officially-sanctioned Catholic church in Beijing. The Vatican's efforts to heal a decades-long rift with China appear to have stalled, with each side still unwilling to accept controversial bishops appointed by the other. In recent months, Beijing has appeared to take a harder line toward believers, and has ordered the country’s estimated 12 million Catholics to shun foreign influence and to “Sinosize” their Church. (AP Photo/Mark Schiefelbein)

BEIJING (AP) — The Vatican's efforts to heal a decades-long rift with China appear to have stalled, with each side still unwilling to accept controversial bishops appointed by the other.

In recent months, Beijing has appeared to take a harder line toward believers, and has ordered the country's estimated 12 million Catholics to shun foreign influence and to "Sinosize" their Church.

Meanwhile, the ruling Communist Party is again telling members that atheism remains a core value, not to be transgressed.

The ruling Communist Party is again telling members that atheism remains a core value, not to be transgressed.

The developments mark a shift from just over a decade ago, when Pope Benedict XVI penned a landmark letter to the church in China that was seen as an impetus toward improving ties.

That goal now appears to have bleak prospects, according to priests and people with knowledge of China-Vatican relations both inside and outside China. Many spoke on condition of anonymity to avoid damaging their relations with either side.

"Recently, the news we hear is not so good," said Jeroom Heyndrickx, of Belgium's Catholic University of Leuven, who has sought to foster informal cultural exchanges between the church and China.

Chinese officials who manage religious groups and the official Chinese Patriotic Catholic Association did not respond to requests for interviews.

China and the Vatican have had no formal relations for nearly seven decades, since Beijing ordered Chinese Catholics to cut ties with the Holy See soon after the foundation of the Communist state in 1949. Years of persecution followed, until Mao Zedong's death 40 years ago let to the reopening of churches and freeing of imprisoned priests, some for decades, under the party's anti-foreign and anti-religious policies. Popes from John Paul II onward have expressed hope for restoring diplomatic ties.

China and the Vatican have had no formal relations for nearly seven decades.

In his 2007 letter, Benedict XVI urged Beijing to restore ties and permit religious freedom, while inviting Chinese Catholics worshipping in both the state-controlled aboveground and the oft-persecuted clandestine underground churches to unite under his jurisdiction. He called the state-run Catholic Church "incompatible" with Catholic doctrine, but nevertheless made unprecedented overtures toward it.

The sides worked for years to reach agreement on the issue of ordaining bishops, which the Vatican traditionally has held as its right. The unwritten agreement, however, allowed Beijing to pick candidates that the Holy See would consider and then tacitly endorse. Though the deal wasn't always adhered to, it generally prevented Beijing from appointing bishops that the Vatican would consider flawed for personal or doctrinal reasons.

Yet the sides now appear deadlocked over a small number of serving bishops who weren't sanctioned by the Holy See, as well as bishops who have been serving underground congregations not recognized by the official Catholic Association. Sources generally say there are two or three bishops the Vatican considers unacceptable.

Overall, Beijing's attitude toward Catholicism and religion seems to be hardening, with the ruling Communist Party's recent directives to its 90 million members that atheism is an ironclad requirement and that religion is incompatible with socialism.

"Party members should not have religious beliefs, which is a red line for all members," Wang Zuoan, director of the State Administration for Religious Affairs, wrote in the official party journal Qiushi in July.

Meanwhile, the Chinese church at recent conferences has stressed the need to remain independent, and to "Sinosize" themselves — code for accepting party leadership and rejecting foreign linkages.

The Chinese church has stressed the need to remain independent, and to "Sinosize" — accepting party leadership and rejecting foreign linkages.

Beijing's desire is to frame China-Vatican relations in purely political terms, without discussing issues of the church in China, whereas the two are indivisible in the eyes of the Holy See, said Wang Xiumei, a researcher at the official Chinese Academy of Social Sciences.

"There is still a tendency to see the relationship purely in political terms as between two states," Wang said.

Beijing has also sought to limit the growth of Christianity by exercising control over the construction of churches and restricting its involvement in areas from education to health care — areas where it often plays a prominent role in other countries.

At the same time, interest in religion appears to be plateauing, after growing rapidly for three decades following the abandonment of strict controls that had been imposed under Mao. Rising education levels, affluence and personal freedoms may be having a similar effect on Chinese millennials as on their peers in the West, where church attendance is cratering among the young.

The famously pragmatic Pope Francis has shown a desire to improve relations through his reluctance to criticize Beijing for imprisoning bishops while emphasizing his great esteem for China's people and civilization. In one recent case, the Vatican issued a statement over the imprisonment of the bishop in the eastern city of Wenzhou only after Germany's ambassador did so first.

Francis and Chinese President Xi Jinping got off to a good start when they first exchanged greetings in March 2013, after they were elected to their positions within hours of each other. The next year, Francis sent a telegram of greetings when he flew through Chinese airspace en route to South Korea — a milestone in itself, given that St. John Paul II had avoided Chinese airspace during his trips to Asia.

Since then, the Vatican has stepped up cultural and academic contacts with China, including hosting an organ trafficking conference where Chinese doctors were able to declare that China had ended its past practice of harvesting organs from prisoners. Bishop Juan Ignacio Arrieta — the No. 2 in the Vatican's legal office — was also dispatched to China as part of continuing regular contacts.

The Vatican has stepped up cultural and academic contacts with China.

Cardinal Pietro Parolin, the Vatican secretary of state who is spearheading the Vatican's efforts at a thaw, has said the Holy See has patience for what will inevitably be a long and difficult reconciliation process.

"There is the burden of history behind us, and we have to overcome it," Parolin said earlier this year.

The Vatican's apparent soft line and policy of appeasement has been met with criticism at home and abroad, with retired Hong Kong Cardinal Joseph Zen among the most vocal opponents, while his successor, Cardinal John Tong, has been a supporter.

"In the Vatican, they have been timid," said the Rev. Bernardo Cervellera, editor of AsiaNews, which closely covers the Catholic Church in China. "And in all this, who is the victim? It's the underground church, which feels targeted, persecuted, abandoned and overcome."