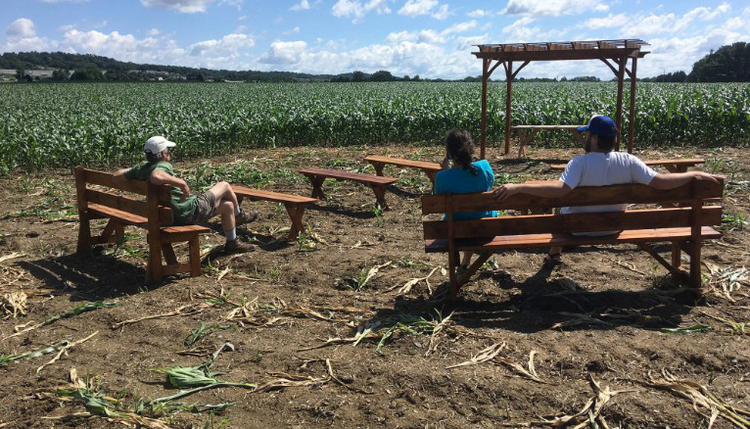 People sit at an outdoor chapel on the property of the Adorers of the Blood of Christ in Columbia, Pa,. in early July. The chapel was built by Lancaster Against Pipelines in cooperation with the congregation as a symbol to block the Atlantic Sunrise natural gas pipeline, which opponents say would desecrate God's creation. (CNS photo/Mark Clatterbuck, courtesy Lancaster Against Pipeline)

WASHINGTON (CNS) -- The Adorers of the Blood of Christ and other landowners in Lancaster County, Pennsylvania, have lost their court case to keep a natural gas pipeline from being built on their property.

In an Aug. 23 opinion, U.S. District Judge Jeffrey Schmel ordered that Williams Partners and their Transco subsidiary can have permanent right of way of 1.05 acres to build the 42-inch pipeline, as well as another 1.65 acres of right of way on a temporary basis to build it. The pipeline will extend through Maryland, Virginia, North Carolina and South Carolina.

In a memorandum of opinion supporting his order, Schmel said the company's claimed monthly losses of $500,000 because of the delay in pipeline construction and revenue losses of $33 million a month until it is built was "sufficiently proven" by Williams. Schmel also ordered Williams to pay $329,000 to the Adorers and the other landowners for their property.

Schmel ordered Williams to pay $329,000 to the Adorers and the other landowners for their property.

Schmel discounted the freedom-of-religion argument posed by the Adorers; the landowners were defendants in this case. The order allowed the construction of an outdoor chapel by opponents of the pipeline on their part of the property in question.

"Defendant Adorers argue they will suffer harm that implicates their fundamental rights to free exercise of religion and ownership of property if Transco is granted immediate possession. Adorers claim that they 'exercise their religious beliefs by, among other things, caring for and protecting the land they own,' and that their efforts to 'preserve the sacredness of God's Earth' are integral to the practice of their faith," Schmel said.

"However, the Adorers have failed to establish how Transco's possession of the right of way on their land will in any way affect their ability to practice their faith and spread their message. They have not presented one piece of evidence that demonstrates how their religious beliefs will be abridged in any way. Clearly, the harm alleged by Transco outweighs this harm alleged by the Adorers."

While "disappointed" with the order, "the Adorers continue to pursue their independent claim that the use of their property for the Atlantic Sunrise Pipeline would violate their right to religious exercise as protected by the Religious Freedom Restoration Act," the order said in a Aug. 23 blog posting on its website.

Ann Neumann, part of a 10th-generation family in Lancaster County -- whose Mennonite pastor sister and brother-in-law live in the house in which she grew up -- told Catholic News Service "there aren't many" next steps to take after Schmel's order. That did not stop the group Lancaster Against Pipelines, founded by Neumann's sister and brother-in-law, from meeting the night the court order was issued.

One of those next steps was a vigil Aug. 27 at the Adorers' outdoor chapel, with about 80 attending. Neumann called the vigil "very beautiful, especially this time of year with the crystal skies. ... Sister Leona (Hunter of the Adorers) opened the vigil last evening and we had some readings together. We sang. Also, a local musician sang some songs," she said. "We discussed how to move forward and, I think, made some good decisions on how to organize ourselves and hold that space when and if construction begins."

"We discussed how to move forward and made some good decisions on how to organize ourselves and hold that space when and if construction begins."

One event will be a Sept. 8 "Boogie for Bail" fundraiser to help protesters get out of jail if arrested for blocking pipeline construction access.

Neumann said that despite the fact an alternate route was found to spare her childhood home, she travels to Lancaster County every weekend from Brooklyn, New York, to work with other pipeline protesters. "We're talking soccer moms and construction workers and people who would rather go on with their lives," she added. "We have to stand between bulldozers and our children's future."