Should Democrats fund pro-life candidates to retake the House? Some say yes.

Should Democrats fund pro-life candidates to retake the House? Some say yes. 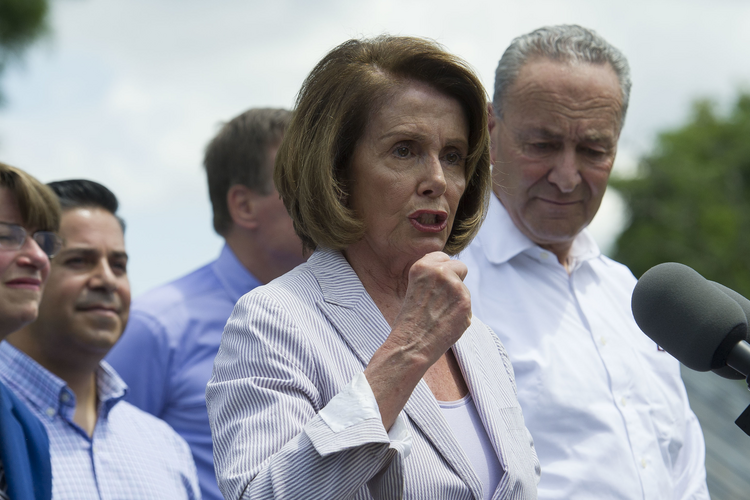 A debate over whether the national Democratic Party should help fund Democrats running for office who oppose abortion appeared to pick up momentum in recent weeks, with high-profile officials coming down on opposite sides of the debate.

Gov. Jerry Brown of California told NBC News on Aug. 6 that “hot button issues” such as abortion should not be “the guiding light for a national party that covers a very wide spectrum of belief.”

Appearing on Meet the Press, Mr. Brown, a onetime Jesuit novice who chose instead to pursue a career in law and politics, said that “it wasn’t very long ago that a number of Catholic Democrats were opposed to abortion. So the fact that somebody believes today what most people believed 50 years ago should not be the basis for their exclusion.

“In America, [political parties are] not ideological. We’re not like a Marxist party in 1910. We are big tent by the very definition,” he continued.

Jerry Brown: "We’re not like a Marxist party in 1910. We are big tent by the very definition.”

He suggested that measures to promote a strong economy or robust national defense could unite Democrats, saying that if any litmus test were applied to candidates, it should be “caring about, as Harry Truman or Roosevelt used to call it, the common man.”

Mr. Brown pointed to the vast differences in opinion on social issues throughout the United States and said Democrats have to compete everywhere.

“America is not one place. Alabama is not San Francisco or California,” he said, suggesting that Democrats “can’t let these hot button issues, that work great in particular congressional districts one way or the other, to be the guiding light for a national party that covers a very wide spectrum of belief.”

Former U.S. Rep. Bart Stupak, a Democrat from Michigan who retired in 2010, wrote in an essay published by Time on Aug. 8 that Democrats “need to embrace these individuals who thankfully don’t vote on a single issue, but rather support our party’s whole program.”

Mr. Stupak, a pro-life Democrat who fought to include provisions in the Affordable Care Act that would have prohibited using federal money to pay for abortions, wrote that running in a more conservative district meant he had to appeal to an ideologically diverse electorate.

“I know that my anti-abortion views sometimes frustrated my Democratic supporters, but they ultimately knew that I was fighting for them on most of the issues they cared about, including the economy, protecting our environment and providing healthcare for all,” he wrote.

“If we establish a litmus test on this single issue, we’ll surely turn away voters in key states and districts in 2018 and become a minority voice."

He said that the Democratic Party has become less tolerant of those with anti-abortion views, to the detriment of social programs championed by the left.

“We’re no longer the ‘Big Tent Party.’ I fear we’re now the ‘pro-abortion rights’ party,” he wrote. “If we establish a litmus test on this single issue, we’ll surely turn away voters in key states and districts in 2018 and become a minority voice without an effective voice on economic and social policies.”

In the run-up to the 2016 election, pro-life Democrats expressed disappointment that the party’s platform included language promising to overturn a federal rule designed to prevent taxpayer money from funding abortions, known as the Hyde Amendment. Following Hillary Clinton’s loss to Donald J. Trump, top Democrats have engaged in months of debate about how to expand the appeal of the party in more rural and conservative-leaning areas.

But earlier this year, the head of the Democratic National Committee, Tom Perez, said, “Every Democrat, like every American, should support a woman’s right to make her own choices about her body and her health,” calling such support “non-negotiable.”

Following Hillary Clinton’s loss to Donald J. Trump, top Democrats have engaged in months of debate about how to expand the appeal of the party in more rural and conservative-leaning areas.

That prompted Democratic leaders such as the Senate minority leader, Chuck Schumer, and the House minority leader, Nancy Pelosi, to say that while they and most other Democrats support abortion rights, the party should nonetheless welcome pro-life individuals. Mr. Perez met with a group of pro-life Democrats earlier this summer, though reports say he did not agree to any specific requests.

“Democrats have a lot of work ahead of us if we want to take the House back in 2018,” he wrote on his Facebook page. “As you are aware, Republicans control both chambers in the Congress.”

Mr. Luján was responding to criticism from pro-choice organizations unhappy with his statement on July 31 when he told The Hill, “There is not a litmus test for Democratic candidates.

“As we look at candidates across the country, you need to make sure you have candidates that fit the district, that can win in these districts across America,” he said, noting that Democrats have to pick up 24 seats, some in conservative districts, to flip control of the House.

According to a 2013 report from the Pew Research Center, support for access to legal abortion varies greatly in the United States based on region, with the highest level of support in New England and the lowest in the south central region, comprised of states including Alabama, Arkansas and Texas.

But Sen. Kirsten Gillibrand, a Democrat from New York, responded on Twitter to Mr. Luján, writing, “We do not have to make compromises on protecting women’s health to win back the House or Senate.”

A few days later, Kristen Day, head of Democrats for Life, wrote in The Washington Post that pro-life Democrats are different from pro-life Republicans because of the policies they support.

Should we call this a "Conversion" or pragmatism. The is ripe coming from the party that applied the label "war against women" from the GOP, based upon the funding of contraceptives. How on earth do you build a society when you find motherhood a complication or children a burden?

I don't think the Democratic party should support pro-life candidates. The official Democratic platform is very pro-choice, and changing that stance would be to renounce that and to renounce the rights of 51% of the party's members (women). We don't need a second version of the Republican party.

Since Democrats seem to be now the most hawkishly suicidal of the two parties ("the Russians are coming, the Russians are coming!"), it is only natural to doubt that the fossilized leaderships of Nancy Pelosi and Chuck Schumer would renounce their radical stance on abortion. Because of its support of destabilizing conflict and abortion, the party has fully embraced the Culture of Death.

Their stance on abortion isn't "radical" ... it's what has been the law of the land for the last 40 years as decided by the Supreme Court.

Actions can be barbarous and perfectly legal. Before the Civil War, the Supreme Court upheld the legality of slavery (Dred Scott v Sandford) with language similar to that of Roe v Wade, relativizing the inherent humanity of the victims. Both decisions were 7-2.

The Democrat Party, as has been stated numerous times by scores of Democrats, is out of touch with average Americans. No wonder they have lost state legislatures across the country, governors mansions (West Virginia recent defection didnt help) and of course all 3 Branches of Govt at the Federal Level. Props to Barack Obama's "hope and change" scheme. It worked well for his bank accounts. Nod to Sir Richard Branson $5 Billion net worth and partying with Michelle and Barack in our faces as Americans sink in despair. Way to go Barry!

Let the Democrats do what they have been doing. Other than the main screed media, Americans have walked away from them and turned to someone just as egotistical, naricisitic and unstable as Hillary Clinton: Donald Trump

Politics in America today is cheap theater where the actors smell no sweeter, and are no more clean, than the ladies of the night standing on street-corners.

Polls show most people want abortion to remain legal, so I doubt that's a factor in why the Democrats have lost.

We should admit that abortion is murder.

And recognise we condone the murder of people all the time:
via Wars, via letting the Homeless die on the streets, via denying
Medical Benefits from those who could be saved, via driving our cars far faster than is safer, [ there really is no need to go over 35 mph an hour],
via Capital Punishment, allowing organised gangs in jails rule the prisons...

As Catholics we believe that God brings every soul and ever person into
existence in His own Good Time. That most babies that are aborted are
not dying in the womb, not an immediate danger to their mother's life,
but are killed in a form of Post Conception Birth Control - obliges us to
not to support the Supreme Court Decision on Abortion and to turn
away from Politicians that do.