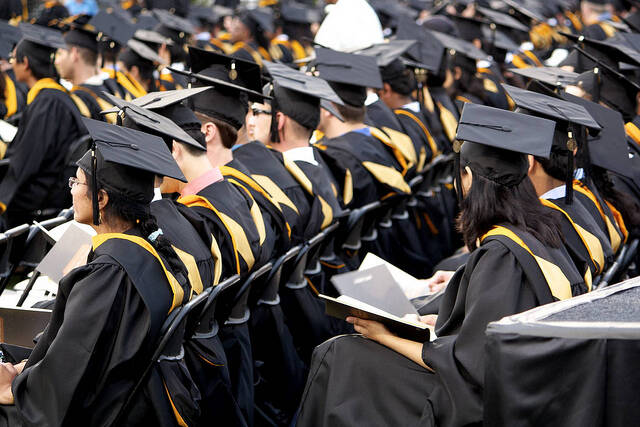 Colleges do not seem to obey the classic rules of economics. New research from the Federal Reserve Bank indicates that raising the price of a diploma does not reduce demand: An 81 percent rise in tuition and fees at public colleges between 2001 and 2009 had no discernible effect on college enrollment or completion rates. But it did result in much higher debt for college graduates, with student debt per capita for 24-year-olds rising by $5,700 between 2003 and 2011. That increase, the researchers argue, is a major cause of low rates of homeownership among millennials—fewer than one-third of adults under 35 own homes, a significantly lower percentage than in previous generations. Using the Fed’s numbers, the Bloomberg reporter Shahien Nasiripour estimates that about 360,000 fewer young Americans owned a home in 2015 because of student debt.

This is worrying, because homeownership often coincides with starting a family. The median age at which Americans first get married is at a record high (30 for men, 27 for women), and the average age at which a woman has her first child is similarly climbing. Heavy debt from a college education can only make it more difficult for young adults to undertake the commitments of marriage and parenthood.

Heavy debt from a college education can only make it more difficult for young adults to undertake the commitments of marriage and parenthood.

The Federal Reserve researchers criticize state governments for cutting funding for higher education and shifting more costs onto students themselves. This may seem like a low-risk strategy, they write: Many young people feel a college education is a necessity no matter how much debt they must assume, and so the states are not seeing “a decline in workforce skills.” But, they add, “the de-funding of higher education has not been costless,” pointing to “weaker spending and wealth accumulation among young consumers.” It would be ironic if excessive debt is also causing young adults to postpone family formation, given that marriage is associated with economic stability and better mental and physical health.

Reducing the cost of college is one way to tackle rising student debt, especially if employers continue to raise educational requirements. Bringing down housing prices, and the additional debt incurred in buying a home, should be another policy objective, and that means increasing the housing supply. On both fronts, we need to lower the barriers to moving into full adulthood.