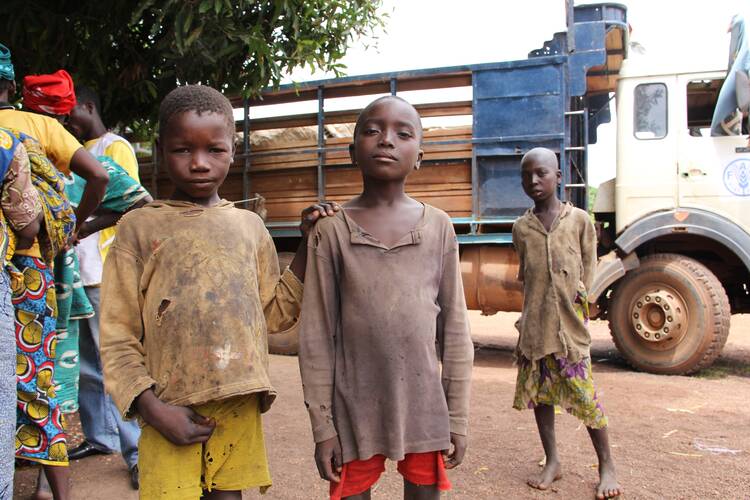 So much bad news about global poverty, it is easy to become depressed. The United Nations so often dismissed as a bloated, lurching bureaucracy, it is easy to feel cynical. But as much as the human suffering engendered by poverty is a real and anguishing aspect of modern life, there is often good news to report about poverty.

Coordinated and sustained efforts to mitigate the worst of the world’s poverty-related suffering have had demonstrable, positive effects. Rising incomes and improving standards of living are moving millions out of poverty each year. It is worth acknowledging, even celebrating those successes, if only to stiff-arm hopelessness a little.

A recent progress report on the United Nation’s 2030 Agenda for Sustainable Development, released at the start of a high-level U.N. forum in mid-July, offers some encouraging data. According to this report card on anti-poverty gains, in 2013, 767 million people lived below the international poverty line of $1.90 a day. That is a lot of people in difficult circumstances, but the absolute number is down significantly from the 1.7 billion who lived below that extreme poverty measure in 1999.

According to the United Nations, the overall global poverty rate has also dramatically declined. In 2016, just under 10 percent of the world’s workers were supporting families on less than that gruesome $1.90 per person per day level, down from 28 percent struggling to do the same in 2000. And the world’s undernourished population declined from 15 percent in 2000-02 to 11 percent in 2014-16.

The impact of the Trump foreign aid reductions, if enacted, “would be swift, devastating, and felt for years to come, imperiling millions of lives and the course of global development, stability, and partnership.”

The United Nations reports about 793 million people are undernourished globally now, down from 930 million people in 2000-02. In 2016, an estimated 155 million children under 5 years of age experienced stunted growth because of chronic malnutrition. That is a grim figure, but it is down by just under a third from the number who were stunted by hunger in 2000.

Progress was most significant in East and Southeast Asia, where the extreme poverty rate declined from 35 percent in 1999 to just 3 percent in 2013. Unfortunately, that kind of dramatic progress still eludes sub-Saharan Africa, where 42 percent of the people endured extreme poverty in 2013.

Can this progress continue? With enough funding, persistence and judicious, creative interventions there is no reason it cannot. The sustainable development goals U.N. member states agreed to in 2015 guide the global effort against poverty.

The world could be on track to end abject poverty, defined as individuals subsisting on less than $2 a day. The wealthy and the powerful merely need to surrender a fraction more of the privilege most inherit by the good fortune of birth or geography; the world’s advanced economies need only to continue an arguably meager commitment of just .7 percent (yes, less than 1 percent) of their gross national income to development assistance. (Though among the world’s largest overall donors, the United States has struggled to give anything more than about .2 percent of its annual G.N.I. away in foreign assistance.)

But threats to progress are many; conflict can erase decades of development in a matter of weeks. Assuming the Syria crisis ends tomorrow, for example, it will take more than 30 years to restore its economy and infrastructure. And climate change remains an unpredictable threat to some of the poorest and most vulnerable populations on earth. But most threatening of all is the dissipation of political and public will to do more to end human immiseration.

In May, President Trump proposed a 32 percent cut in spending on diplomacy, foreign assistance and contributions to international organizations that include global humanitarian relief and anti-poverty programs. Specific development assistance programs would essentially be wiped out and others sharply cut back. Aid to Africa, where conflict and famine loom, would be reduced in 2018 from $8 billion to $5.2 billion.

In June a broad coalition of humanitarian relief and development agencies, including Catholic Relief Services, Bread for the World, Mercy Corps, the International Rescue Committee and Oxfam, objected to the proposed cuts. According to a statement released jointly, “The deep and disproportionate cuts...will have life and death consequences today and will also undercut America’s—and the world’s—ability to address tomorrow’s global threats.”

The impact of the Trump foreign aid reductions, if enacted, “would be swift, devastating, and felt for years to come, imperiling millions of lives and the course of global development, stability, and partnership.”

Congress has been unwilling to accept such deep cuts, but meeting the Trump administration halfway, or even a quarter of the way, would mean stark reductions in humanitarian relief that has kept the momentum going on global anti-poverty targets. Indeed the House counter-proposal for foreign assistance in fiscal 2018, though not as drastic as the president’s plan, proposes spending $10 billion less than fiscal year 2017 levels even as the world faces famine in Africa and an accelerating migration crisis.

And how is the president planning to invest the cash he is hoping to carve out of foreign aid budgets? He has asked Congress for a $54 billion increase in the U.S. defense budget, betting that military gluttony, not equitable international development, will prove a better guarantor of U.S. security.

But that is not how people in the business of assessing geopolitical threats view it. They argue that “soft power” initiatives, joined with diplomacy and military might, is essential to fostering stable regional conditions that help keep the global peace.

“The agendas of sustainable development and the agendas of preventing [conflict] and sustaining peace need to be linked,” Secretary General António Guterres said on July 17 at the opening of the U.N. forum. “But here there is a caveat—that link should not be a pretext to move resources from development to security; on the contrary, that should make us understand the centrality of development in what we do.” World leaders should recognize, he said, that “sustainable and inclusive development is in itself a major factor” in the prevention of conflict.

Meeting the Trump administration halfway, or even a quarter of the way, would mean stark reductions in humanitarian relief that has kept the momentum going on global anti-poverty targets.

Noting the moral paucity of a trade-off of humanitarian assistance for more weapons, the U.S. bishops wrote in a letter to Congress in May, “Our nation should elevate diplomacy and international development as primary tools for promoting peace, regional stability and human rights, not adopt deep cuts to these budgets.”

The bipartisan Center for Strategic and International Studies found plenty it would like to reform about U.S. foreign assistance in an assessment released on July 24, but it strongly pushed back against Trump administration proposals to reduce or bureaucratically obliterate a vibrant U.S. role in promoting development abroad.

“There has been incredible progress in much of the world,” the authors of a recent C.S.I.S. report concluded, “and the United States can take some credit for it; but continued progress will require continued U.S. global leadership in development. Our friends seek our continued leadership, our adversaries fear it, and Americans should demand it.”

Let’s hope someone in the Trump administration is getting that message as the world takes a few more steps closer to its 2030 development goals.

So, nice that the U.N. reports on itself that they're doing so well... usual stuff here.