Catholic-evangelical relations are richer than the conspiracies Civilta Cattolica described 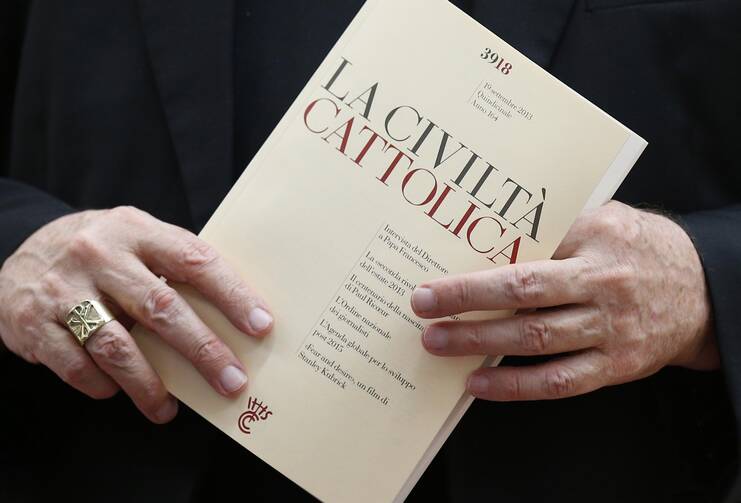 Catholic News Service: In the July issue of the influential Jesuit monthly La Civilta Cattolica, editors Antonio Spadaro, S.J., and Marcelo Figueroa wrote a long editorial titled "Evangelical Fundamentalism and Catholic Integralism: A Surprising Ecumenism." The authors described what they saw as worrisome convergences between certain apocalyptic forms of American evangelicalism and some contemporary Catholic ideologies, contrasting these tendencies with the teachings and global strategy of Pope Francis. This essay has prompted much discussion. Catholic News Service asked Jesuit Father Drew Christensen to comment on the essay from his experience as longtime observer of U.S. religion and politics.

In a recent editorial, "Evangelical Fundamentalism and Catholic Integralism: A Surprising Ecumenism," Civilta Cattolica identified cooperation between Protestant fundamentalists and conservative American Catholics as "a problematic fusion between religion and state, faith and politics, religious values and economy." Civilta particularly attacked the Prosperity Gospel as a stream of popular theology opposed to Catholic social teaching as advanced by Pope Francis.

Catholic-evangelical relations in the United States, however, are richer and more nuanced than the fearsome conspiracies Civilta described. Take, for example, the Evangelical Environmental Network.

Catholic-evangelical relations in the United States, however, are richer and more nuanced than the fearsome conspiracies Civilta described.

EEN is a nimble coalition of some 700 congregations. Whatever the issue, it has been quick out of the blocks with arresting public relations campaigns. Were gas-guzzling autos a threat to clean air? EEN offered America "WWJD," the "What Would Jesus Drive?" campaign. Were animal species threatened with extinction? Then an EEN spokesman would appear on late-night TV a wildcat draped across his shoulders.

The National Religious Partnership for the Environment, which, besides EEN, included the National Council of Churches and the Coalition for the Environment and Jewish Life, was one of the many places where, as a staffer for the U.S. Conference of Catholic Bishops in the 1990s and early 2000s, I got to know evangelicals close up. When Cliff Benzel, representing EEN, led the partnership in prayer, I never failed to feel deeply united in prayer across denominational lines.

In those years, Evangelicals for Social Action, led by Ron Sider, also fostered relations with Catholics. Its Crossroads programs, for example, partnered senior scholars with graduate students and invited Catholic scholars to help develop a body of evangelical social thought, which drew some of its inspiration from Catholic social teaching.

World Vision, the international charity, was a bastion of evangelical life that invited Catholic input.

World Vision, the international charity, was a bastion of evangelical life that invited Catholic input. World Vision's president, Bob Seiple, invited me to speak to his board and his benefactors. Andrew Natsios, vice president for policy, asked for collaboration in teaching staff on how to shape policy statements along theological grounds. When Bob Seiple opened an international religious liberty lobby, the Institute for Global Engagement, I was there.

IGE continues to work for religious liberty in some the most difficult and remote situations in the world. It also sponsors The Review of Faith in International Affairs, a respected journal for which I serve as a consulting editor.

Evangelicals have helped the Catholic Church at the highest levels. After St. John Paul II's visit in 1987, the Billy Graham Association was the Vatican's backdoor conduit to the Catholics in North Korea. Pope Francis' meeting this year with U.S. President Donald Trump was made possible by American evangelicals after they met Catholic officials at the National Prayer Breakfast.

Evangelicals have helped the Catholic Church at the highest levels.

The Poverty Summit at Georgetown University in 2015, in which President Barack Obama asked to be included, demonstrated the great potential for future evangelical-Catholic collaboration for the common good.

I like to think that my encounters with evangelicals are akin to those of Pope Francis, who asked a blessing of Pentecostals in his native Argentina and forgiveness for persecution from the 800-year-old Waldensian Church. Evangelicals are fellow Christians with whom we are companions on the way. We enjoy relations of mutual esteem, collaboration and even, as I remember Cliff Benzel, Bob Seiple and Andrew Natsios, of deep Christian fellowship.

Exclusive interview: Antonio Spadaro on his article about ‘The Ecumenism of Hate’ in the U.S.
Gerard O’Connell

Of course, Catholic-evangelical relations are not always or uniformly characterized by the kind of professionalism and Christian amity I have described. In some places most of the time and in others from time to time, there are troubled relations. For some years, for example, local World Vision policies in Latin America and Ireland were obstacles to smooth relations. Some Latin Catholics are still suspicious of "las sectas" and vice versa. U.S. bishops have sometimes had to remind evangelicals of Catholic sensitivities and Catholic parishioners of their ties to the local dioceses or Catholic Relief Services.

I myself confess to having felt constrained when I testified to the United Nations on "Christianophobia," because, while proselytism is central to evangelical life, I had to note that in majority Muslim countries it can become an occasion for persecution of historic Christian communities.

Problems arise when those on either side, or both, force their partisan issues into social ecumenism or apply their political infighting skills to it. Activists need to be reminded of Blessed Paul VI's counsel, "From Christians who at first sight seem to be in opposition, as a result of starting from differing options, (the church) asks...an attitude of more profound charity which, while recognizing the differences, believes nonetheless in the possibility of convergence and unity."

More: Ecumenism / US Politics / US Church

Drew Christiansen, S.J., former editor of America, is distinguished professor of ethics and global human development at Georgetown University. He serves on the seventh round of the United Methodist-USCCB dialogue.

Hard to believe that "Evangelicals and Catholics Together" was written over 20 years ago:
Forgive me in advance for posting the link to a rival publication:
https://www.firstthings.com/article/1994/05/evangelicals-catholics-together-the-christian-mission-in-the-third-millennium