Three questions about the future of nuclear weapons 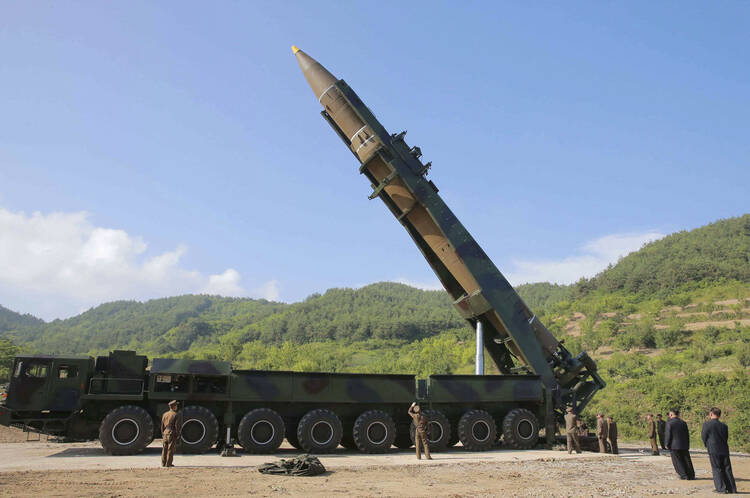 Last week a special United Nations conference passed a new treaty to ban nuclear weapons. People naturally ask, “What’s next?” Here are some of the things to watch for.

First, during the annual meeting of world leaders at the U.N. General Assembly in September, the treaty will be presented to Secretary General António Gutteres. It will be opened for signature on Sept. 20. Then on Sept. 26 there will be a ceremonial event, marking the passage of the treaty and early signings.

Proponents of the treaty argue that over time the stigma of being in breach of the treaty will bring nuclear weapons states on board.

Once signed, it will need to be ratified by parliaments or other governmental entities with that power. The treaty will “enter into force” when 50 states have signed and ratified it. With 122 non-nuclear countries voting for the treaty at the end of negotiations, it should not take long for the treaty to technically “enter into force.” It will take longer for the 49 others who did not attend—among them the nuclear powers, their allies and so-called nuclear “umbrella states”—to join up.

A year from now Secretary-General Gutteres will call the first review conference to examine progress to date. At that time, one item high on the agenda will be for the parties to the treaty to organize “a competent international authority” to verify “the irreversible elimination of nuclear weapons programs” when nuclear-armed states eventually join the treaty.

What will bring the nuclear weapons states on board?

Proponents of the treaty argue that over time the stigma of being in breach of the treaty will bring nuclear weapons states on board. They cite the precedents of earlier arms control treaties, opposed by military powers, which eventually became international law: the convention on biological weapons, the convention on chemical weapons and the antipersonnel landmine and cluster munition treaties. While the Comprehensive Test Ban Treaty has not formally entered into force, they argue, it is observed in practice even by states, like the United States, that have not ratified it.

Stigmatization ultimately relies on the force of public opinion. The signatories will look again to civil society, organizations like the International Committee of the Red Cross, the International Campaign Against Nuclear Weapons and Pax, along with religious groups and movements to keep the pressure up on governments to join the ban.

Stigmatization ultimately relies on the force of public opinion.

The Netherlands is an example of the kind of country where popular pressure may lead to policy change. While Netherlands was an active, though critical, participant in the conference negotiating the treaty, ultimately voting against it, the majority of its parliamentarians and populace are anti-war and anti-nuke. For that reason, in time one can imagine the Dutch pulling out of the U.S. nuclear umbrella and opting for the treaty.

New Zealand, a Western ally, was a leader in the “ban the bomb” movement, and years ago banned ships carrying nuclear weapons from its harbors. New Zealand shows it is possible to be a U.S. ally and support a ban on nuclear weapons.

Will there be the role for religion in advancing the anti-nuke ban?

Yes. The ban conference was quite conscious that civil society had played an important role in laying the groundwork for the negotiating conference and anticipates its further involvement in meetings of state parties in the future (Article 8.8). It acknowledged the role of religious leaders in this process (Preamble), inviting Pope Francis to give an opening address on the first day of the conference last March.

In his 2017 World Day of Peace Message, Pope Francis made nuclear disarmament a priority of his pontificate. The Holy See, as I reported last week, cast its first U.N. vote two weeks ago for the treaty. Showing the seriousness of its commitment, the Vatican will hold a major international conference this coming November on “the prospects for a world free of nuclear weapons.”

In his 2017 World Day of Peace Message, Pope Francis made nuclear disarmament a priority of his pontificate.

Pax Christi, other Catholic organizations and bishops conferences are acting to support the ban. The day before the adoption of the ban treaty Archbishop Jean-Claude Hollerich, the president of European Justice and Peace Commissions, and Bishop Oscar Cantú, chairman of the U.S. bishops’ Committee on International Justice and Peace, issued a joint letter calling for European states to map out with the United States “a credible, verifiable and enforceable strategy for the total elimination of nuclear weapons.”

What about North Korea?

That is the question at the tip of the tongue of even those sympathetic to the treaty. The treaty is not going to stop North Korea’s nuclear development program in the short run. It is likely to engage only later when the larger nuclear powers—the Unites States, China and Russia—make evident progress toward abolition and when relations with the United States have been normalized. The Kim regime has reason to fear its larger neighbors, too, and it cannot be expected to disarm until they are also on the path to the elimination of nuclear weapons.

Is it too hard to imagine that with the help of South Korea, the Korean peninsula could become the Vietnam of the northern Pacific?

With no viable military solution to the Korean nuclear problem, any hope for reducing tensions with the United States lies in negotiations. The North Koreans are exceptionally tough negotiators. But their bottom line has been known for a long time. They want recognition and then security assurances from the United States.

In its first-ever U.N. vote, the Holy See says ‘No’ to nuclear weapons
Drew Christiansen

On the first count, it is hard to know what holds the United States back. It deals with all sorts of nefarious governments. The Trump administration is unusually close to autocratic regimes. Thanks to intervention by Pope Francis, the United States now has diplomatic relations with communist Cuba. We fought a long war with communist Vietnam, which is now a commercial partner and quasi-ally. Why not accept North Korea, too? Is it too hard to imagine that with the help of South Korea, the Korean peninsula could become the Vietnam of the northern Pacific?

Second, the new South Korean government took office with hopes for unification and has shown its reluctance to house U.S. THAAD anti-missile installations. If the South does not want the protection of an alliance with the United States or U.S. troops or installations on its territory, then it becomes easier for the United States to offer security assurances for a material de-escalation in the tensions between our two countries. South Korean policy, therefore, has a key role to play in the containment of the North’s nuclear program. But the United States must take the lead in talks leading to recognition and normalization.

Drew Christiansen, S.J., the former editor of America, is the Distinguished Professor of Ethics and Global Human Development at Georgetown University’s School of Foreign Service and Senior Research Fellow with the university’s Berkley Center for Religion, Peace and World Affairs. He served as an expert with the Holy See delegation to the United Nations conference that negotiated the Treaty to Prohibit Nuclear Weapons earlier this month.