Senators: Did you come to Washington to take health care from the sick and food from the hungry? 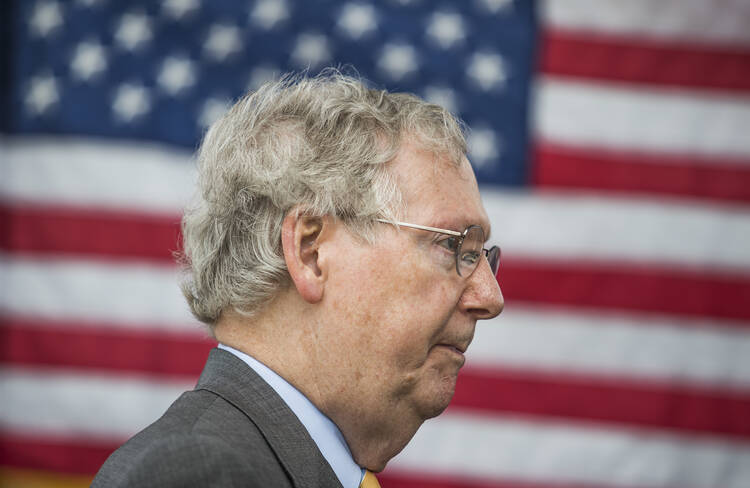 As Congress returns and as leaders of the Senate and House continue their desperate search for ways to pass their health and budget proposals, I have one simple question for those whose votes will decide these matters: Is this really why you came to Washington, to take health care from the sick and food from the hungry?

I hope and believe their answer is no. However, the health and budget proposals before Congress will do just that. They make devastating cuts to health care and nutrition for families with the fewest resources and power to fund massive tax cuts for those with the most resources and power.

There is no popular mandate for these upside-down policies and priorities. Members of Congress pledged to cut poverty, not the safety net. President Trump campaigned against cuts to Medicaid, stating that the House bill was too “mean “and the Senate legislation needs more “heart.” However, the Senate proposal, according to the Congressional Budget Office, would increase the number of people without health insurance by 22 million in 10 years. This legislation would cap and cut the Medicaid program over time by more than 25 percent, reducing essential care for poor families, pregnant women, people with disabilities and patients in nursing homes.

I have never seen the partisan and ideological isolation and dysfunction of Washington threaten poor families so seriously and directly.

The administration’s budget and House proposals would cut SNAP, formerly known as food stamps, by 25 percent, hurting seniors, children and parents who struggle to put food on the table. The administration’s proposed budget reduces development assistance to poor countries by a third, eliminates international food aid and cuts global health funding for H.I.V./AIDS and malaria, increasing hunger at a time of famine and denying lifesaving medicine and care to the poorest people on earth.

Over this recess, legislators whose votes will be decisive should listen to their constituents—and their consciences. They should also hear the appeals of religious leaders who have united in a “Circle of Protection” to defend the lives and dignity of the “least of these” (Mt 25) in the health care and budget debates. The U.S. Catholic bishops have warned the Senate legislation is “unacceptable” because it will “wreak havoc on low-income families and struggling communities.” The religious community brings not only moral principles to this debate, but also everyday experience caring for the sick, feeding the hungry, sheltering the homeless and picking up pieces of a broken health care system.

In more than 30 years of advocacy at the intersection of faith and public policy, this is the starkest choice confronting Congress. I come from a bipartisan family and learned at an early age that people express their faith in diverse ways and different parties. Along with many others, I have worked with both Democratic and Republican leaders to strengthen and improve Medicaid, the Earned Income Tax Credit, food stamps and international development and H.I.V./AIDS assistance. These are hard won achievements which required cooperation and compromise across party lines for the common good.

The Editors: Trumpcare bill is closing the door to democracy
The Editors

However, I have never seen the partisan and ideological isolation and dysfunction of Washington threaten poor families so seriously and directly. Republican leaders can call it “repeal and replace,” giving states “flexibility,” offering consumer “choice,” getting rid of “waste and abuse” or “priming the pump,” but Matthew Dowd, a former George W. Bush advisor, made clear “the choice is do you take $1 trillion and help the poor, and vulnerable, and working class in the country in their health care… or do you take the $1 trillion and return it to basically the wealthy of the country?”

The president and Republican leaders should turn away from this divisive one-party search for a political victory that will be a terrible loss for so many of our neighbors. They need to find ways to work with Democrats to address genuine problems of costs, coverage and conscience in the implementation of the Affordable Care Act. Democrats should resist the temptation to simply enjoy Republican divisions, disarray and potential defeat. They should be ready to offer substantive policies and make hard choices to actually assure decent affordable health care to all in a society with deep political, ideological and economic divisions.

At this time of policy chaos and preoccupation with presidential tweets, it is worth remembering that less than two years ago Congress united to applaud Pope Francis’ call “to defend and preserve the dignity of your fellow citizens in the tireless and demanding pursuit of the common good.” Last May, President Trump met and promised Pope Francis, “I will not forget what you said.” With his strong words and humble ways, Pope Francis reminds all of us, “the measure of the greatness of a society is found in the way it treats those most in need, those who have nothing apart from their poverty.” Whether the president, members of Congress and the rest of us heed these words will be a fundamental moral measure of who they are as leaders and who we are as a nation.

John Carr is the Director of the Initiative on Catholic Social Thought and Public Life at Georgetown University and vice-chair of the board of Bread for the World. He served for more than two decades as director of the Department of Justice, Peace and Human Development at the United States Conference of Catholic Bishops.

I only hope that the Church's bishops & clergy are as passionate and single-minded about the lives of the poor and the sick (especially helpless children & the elderly) as they have been about the unborn. So much of the 7 deadly sins are wrapped up in this campaign to take from the poor and give to the rich, not the least being sins of greed & avarice. Instilling instruction about how this is a grievous sin from the pulpit is so aligned with Jesus's teachings and by his constant example this is a no-brainer. Most importantly to further emphasize that those who are to gain from this legislation but do nothing to protect those who will suffer due to their omission to act against it or worse silently hoping that they enjoy a financial gain are just as guilty as proactive leaders who are doing this to placate greedy constituents and wealthy donors or lobbyists. It is time for our bishops to enlist the rich donors they cajole in multimillion dollar fundraising campaigns to stand-up and do the right and moral thing.

article is using hysteria and not considering the failing Obamacare. Also, the destruction/bankruptcy of Medicaid with the reckless expansion of eligibility or Medicaid.

This article misrepresents the current situation in US healthcare and the GOP proposed legislation.

"the Senate proposal, according to the Congressional Budget Office, would increase the number of people without health insurance by 22 million in 10 years."

Except that the CBO model currently over counts the number of Americans with insurance by 12M. Of the remaining 10M projected to lose insurance, the CBO states that 7M of those are people voluntarily dropping insurance they do not want but are currently mandated to purchase. The GOP plan includes several provisions to cover those who would need and want to transition to other coverage.

"This legislation would cap and cut the Medicaid program over time by more than 25 percent, reducing essential care for poor families, pregnant women, people with disabilities and patients in nursing homes."

Just not true. Under the GOP proposal, Medicaid funding would continue to grow, but at a rate slightly lower than the current projected rate. Non-disabled adults without children, i.e. many of those added to Medicaid under Obamacare, would eventually need to leave the program.
Given that current Medicaid rules actually prevent some disabled from being covered in favor of the non-disabled without children, this is simply a matter of justice and returning this program to its intended beneficiaries.

This is another AM article that is one-sided, narrow and not helpful. There is no mention of the pain and suffering that millions of American families are undergoing from skyrocketing ObamaCare premiums (some over 100%) and ridiculously high deductibles. No mention of any reasonable proposal or a solution that might work to fix ObamaCare. All we are get from this article is more criticism that aspects of proposed Republican legislation will hurt some families, especially those who get Medicaid.

Make no mistake about what I am saying. Anyone who has a brain understands that healthcare insurance is complex and when you change one aspect of it, you have to deal with some negative consequences. The truth is that "no-one" has a painless answer and that includes universal government paid healthcare. A single payer government paid universal healthcare plan is equivalent to writing a blank check. Let's just give everyone a good healthcare plan at any cost. Does anyone remember the fact that the CBO estimated that ObamaCare would cost about $800-900 billion....then three years later the CBO corrected its estimate to $2.7 Trillion (a 300% increase). What it costs today is even higher. Yet, Democrats don't want to talk about this...nor does the author of this AM article.

I don't like the current Republican healthcare proposal. However, I dislike ObamaCare even more especially the Bernie Sander-Chuck Schumer call for Medicare-style-uniiveral-government paid healthcare for all Americans. That is a highly irresponsible solution to ObamaCare.

I wish I had the solution. Catholic social teaching asks us to be reasonable and to make the best decisions after we are armed with all the facts and options even when there are no painless ones.

If AM wants to make a contribution to this complex subject they ought to try putting forth an article that is balanced, fair and accurate with at least a few proposed solutions instead of mere criticisms under an unconvincing banner of Catholic social teaching.

I am shocked by those who support repeal and replace (?) with such harsh measures. The GOP proposals are all destructive, especially to the poor, disabled, elderly and children. Why won't they invite the Democrats across the aisle to work together with them to design a truly just and effective health care system.

Just think if each bishop and priest were to contact every senator and congressman they know and personally deliver John Carr' s message to them.