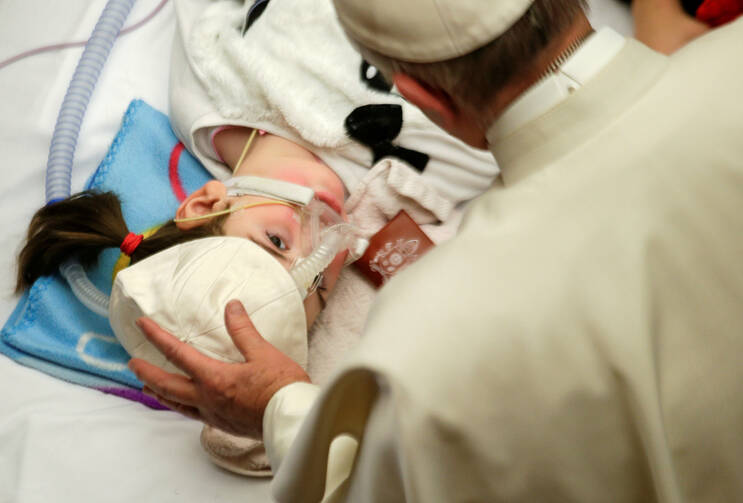 Pope Francis blesses a sick child in Paul VI hall at the Vatican Dec. 15, 2016, during a meeting with patients and workers of Rome's Bambino Gesu children's hospital. Responding to an Associated Press investigation, a top Vatican official said there had been past problems at the hospital, but that the current administration was making a "serious effort to resolve them." (CNS photo/Max Rossi, Reuters)

VATICAN CITY (AP) — The Vatican secretary of state acknowledged Tuesday that there were problems at "the pope's hospital" for children in the past, but said the new administration is making a "serious effort to resolve them."

Cardinal Pietro Parolin said some of the problems identified by current and former Bambino Gesu Pediatric Hospital staff in 2014 were "truly unfounded." But for problems that were verified, "there was an attempt, and there is currently an attempt and serious effort to resolve them," he said.

Parolin was responding to an Associated Press investigation that found that under its previous 2008-2015 administration, the mission of the children's hospital had shifted to focus more on profits than on its young patients.

A Vatican-commissioned report reached that conclusion in 2014 after a three-month investigation into staff complaints that corners were being cut, safety protocols ignored and children put at risk because of pressure to produce.

Cardinal Pietro Parolin said some of the problems identified by current and former Bambino Gesu Pediatric Hospital staff in 2014 were "truly unfounded." But for problems that were verified, there is a "serious effort to resolve them."

But a second, three-day Vatican probe in January 2015 found the hospital was in many ways "best in class." That team, headed by an American health care expert, said it had "disproved" the findings of the first review and said the Vatican should be proud of its hospital for the quality of care it provided, the staff's devotion to children and their families and employees' sense of pride at working there.

Hospital president Mariella Enoc said she found it impossible to believe such problems occurred, but conceded she wasn't at the hospital at the time. She said AP did its job and that she respected its work, and blamed disgruntled employees for what she called "untrue" reports.

"I can say that the climate today is more serene, and I urge everyone when there is a problem ... that we talk and talk and not keep it inside and then have it explode," she said. "We can't always say 'yes,' unfortunately, but we can communicate."

Parolin and Enoc made their comments Tuesday after Bambino Gesu issued its annual report at the Vatican. The hospital boasted in the report of being the only pediatric hospital in Europe that can perform all types of transplants. It said it performed 339 procedures, most of them bone marrow transplants, in 2016.

The hospital reported it had reduced the number of "inappropriate" hospital stays, from 26 percent of admissions in 2012 to 7 percent last year, by increasing the number of outpatient surgeries that were less stressful for children and cheaper for both the hospital and Italy's national health system.

At the presentation, Italy's health minister, Beatrice Lorenzin, praised Bambino Gesu as a leading pediatric research center that made Italy and Rome proud.

"I have met your little patients, some of whom come from around the world, who are treated with great love and great competence," she said.

The AP corroborated many of the first report's findings through interviews with more than a dozen current and former Bambino Gesu employees, as well as patients, their families and health officials. The AP reviewed medical records, civil court rulings, hospital and Vatican emails, and five years of union complaints.

In a statement, the hospital called the AP's report a "hoax" that "contained false, dated and gravely defamatory accusations and conjectures that had been denied" by the second investigation. It threatened legal action.

Both the Vatican and Bambino Gesu pointed to the second report as evidence that all of the allegations — except one involving space constraints — were "unfounded."

The head of the first investigation, however, fully stood by the report he delivered to Parolin, in April 2014. At the time, he told the hospital employees who worked with him on the investigation that it would be used as a guide for reform by the hospital's board.

"What we wrote in that report was the exact truth," Dr. Steven Masotti said in a June 2 telephone interview. "Now things are completely different," he said. "You have kind of a revolution in the hospital. Literally no one is in there anymore of the old guard. ... And they're trying to fix those problems, based on a number of reports, including our report."

Why is the A.C.L.U. targeting Catholic hospitals?
Stephanie Slade

The leader of the second investigation, Sister Carol Keehan, said in an email that she was disappointed by the AP story, saying it distorted, "misrepresented and trivialized the significant review the clinical team and I did."

She said some of AP's statements were factually incorrect, though she didn't say which ones.

"My worry is not for me or the pope. It is for the parents who will be frightened by your distorted picture of the Bambino and parents have enough to worry about when their children are sick," Keehan said. "I also worry for the staff who will feel so disparaged by your portrayal of the work they try so hard to do each day."

A third report, a 2014 external audit by PricewaterhouseCoopers, also found that the original mission of the hospital to care for poor children "had been modified in the last few years" to focus on expansion and commercial activities, without sufficient governance controls.