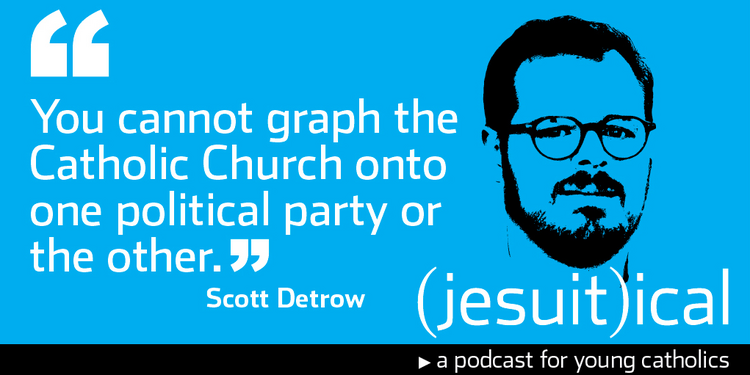 If (like me) you wake up to Morning Edition, ride home to “All Things Considered” and sip your Sunday coffee over “The Puzzle,” this episode’s for you. We are talking with NPR congressional correspondent, host of the “NPR Politics Podcast” and Fordham alum Scott Detrow about how he keeps his sanity while covering the news in the Trump era.

Scott gives us some great tips for keeping up with the news without drowning in it. One pro-tip: Listen to Jesuitical while bike riding. Also, go to church.

Next, it has been said, “You can take away a relic of Don Bosco, but you can’t take away Don Bosco from the church or the world.” Well, that’s a relief, because last week a thief stole fragments of the 19th-century Italian saint’s brain on display at a church in Castelnuovo.

Finally, Pope Francis says we must avoid becoming Christians of “the right or the left.” Does that mean Catholics shouldn’t belong to political parties? We discuss and ask our Twitter fam how they describe their faith.

@americaliterary Roman Catholic. Any other adjectives dilute the Gospel.

When people ask me what I am... and they do... I just say I'm Catholic 😂 not helpful but true.

My faith is Catholic,and it informs my politics. Adherents of CST might accurately call themselves communitarian, personalist, & whole life.

If you like what you hear, subscribe on iTunes, leave us a rating and review and tell your friends, family, roommates, classmates, that random guy sitting next to you in the pew about Jesuitical.

We want to hear from you. Leave us a comment here, write us at jesuitical@americamedia.org or find us on Twitter @jesuiticalshow.

Ashley McKinless is an associate editor as America.