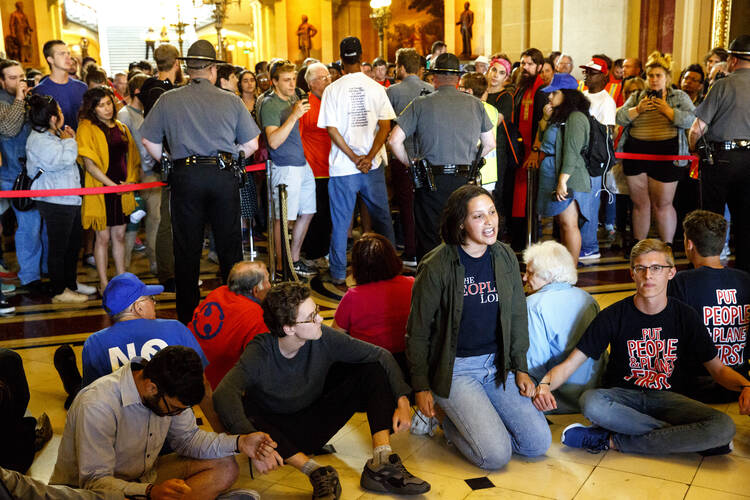 Activists with the March to Springfield hold a protest and rally outside the governor's office at the Capitol in Springfield, Ill. Tuesday, May 30, 2017. (Rich Saal/The State Journal-Register via AP)

For more than 60 years, The Baby Fold in Normal, Ill., has provided residential care for children and teens with severe emotional problems due to abuse and neglect. But on June 30, The Baby Fold’s Residential Treatment Center will close its doors—a casualty of Illinois’ three-year-long budget impasse.

Illinois has not increased the rates it pays The Baby Fold to care for these youths in 10 years. Because of the state’s current budget crisis, the child care provider has used $1.6 million from its cash reserves over the past two years to keep the center open.

“There comes a point where we can’t support a program any longer,” Baby Fold’s vice president for development, Aimee Beam, says.

The Illinois General Assembly ended its regular session on May 31 without passing a budget for the third year in a row. The length of the stalemate is unprecedented—the state’s fiscal policy remains hostage to a Democratic legislature that refuses to make major budget cuts and a Republican governor who will not agree to raising taxes.

The Illinois General Assembly ended its regular session on May 31 without passing a budget for the third year in a row. The length of the legislative stalemate is unprecedented.

Fallout from the impasse has affected mainly the most vulnerable in Illinois: children, the poor, the elderly and the disabled. The Unit 5 School District in central Illinois, which operates 17 elementary schools, four junior highs and two high schools in Normal and nearby Bloomington, says it has less than 60 days’ worth of operating funds on hand. The Chicago Public Schools system says it will need to borrow $389 million to keep operating through the rest of 2017.

Northeastern Illinois University, in a working-class neighborhood on Chicago’s North Side, furloughed employees and had to shut down temporarily. Special education classes for children with disabilities have been cut. In all, social service agencies estimate that about a million people across the state, from homebound senior citizens to domestic abuse victims, have been affected by Illinois’ failure to pay for services that in many cases the state itself mandates.

Forget gridlock in the U.S. Congress. If students of political science are seeking a prime example of government dysfunction, they should look westward to Illinois.

To date, the governor and legislators have reacted to the crisis mainly by trading barbs and pointing fingers. Governor Bruce Rauner, who launched his political career on the basis of his success as a billionaire businessman, is running for re-election next year. He has called Democratic proposals to raise taxes a “phony” and “sham” effort to balance the budget. He wants to cut spending and taxes, restructure the state’s pension system and roll back business regulations to spur economic growth.

The Democratic Governors Association, meanwhile, calls Mr. Rauner a “failed” leader who refuses to “put the people of Illinois first.” The association said a third year with no budget will “lead to more job losses, higher debt, deeper service cuts and a weakened education system.”

Illinois’ $6 billion budget deficit and $130 billion in unfunded pension liabilities compelled Standard & Poor’s to downgrade the state’s credit rating to one notch above “junk” status. It means taxpayers will pay more whenever the state borrows money—which it does a lot.

Comptroller Susana A. Mendoza perhaps best summed up the standoff. “Unconscionable” is how she described it.

For their part, citizens have bombarded legislators with emails and phone calls demanding a budget agreement. Political newcomers are threatening to challenge entrenched incumbents in the next round of state elections.

Several thousand protesters marched last month from Chicago to Springfield, a distance of 200 miles, to draw attention to the urgency of the crisis. Social service representatives, meanwhile, sit outside legislators’ offices hoping for a chance to plead their case.

“It seems to have fallen on deaf ears,” Baby Fold’s Ms. Beam says.

Tom Cullen, a college professor, was one of the protesters who marched to Springfield. His faith-based group, Illinois People’s Action, argues that neither Democratic nor Republican leaders are addressing two of the state’s most pressing issues: the fact that about two-thirds of Illinois corporations pay no taxes and the need to replace the state’s current flat tax of 3.75 percent with a progressive income tax.

“It is morally wrong to balance the budget on the backs of the working class and the poor,” Mr. Cullen says.

Members of Illinois People’s Action advocate what they call a “People and Planet First” budget. Their plan calls for balancing the budget by closing corporate loopholes, establishing the aforementioned progressive income tax and taxing trades on stocks, bonds, currencies and derivatives—the latter proposal known as the “LaSalle Street tax,” a reference to Chicago’s downtown financial district.

“At the heart of the debate on the Illinois budget is the clear division between liberal and conservative philosophies on the role of government. How much should government provide and to whom—questions that politicians on both sides of the aisle have long grappled with,” says Meghan Leonard, a politics and government professor at Illinois State University.

That may be the heart of the debate, but what seems to be preventing the process from going forward is an unwillingness to compromise on either side. It is what Ms. Leonard calls “political tribalism.”

“Seemingly, what is difficult or maybe even impossible to sell is that working with the other side can be helpful, that compromise is good,” she says. “I think there is at least a perception among politicians that if they compromise with the other side, they will be seen as giving into the enemy and the voters will punish them for that.”

Ms. Leonard says that view underestimates voters. “I think persons of all political stripes in Illinois want to see a budget passed.”

Even though the spring legislative session ended without a budget agreement, legislators will likely return to the state capital in Springfield this summer to see if a compromise is still possible. Illinois residents have seen this scenario play out before without results.

That will also be no comfort to the 14 residents of The Baby Fold’s residential center—ages 6 to 13, who have suffered severe trauma in their young lives and must now be moved elsewhere, probably to other residential facilities across the state that face the same sort of fiscal problems as The Baby Fold did.

“The challenges seem to not cease with the state of the state,” Ms. Beam says. “We would like to see some solutions.”

Would be interesting if the author looked at the expense side of the income statement as well as the revenue side. Illinois has been raising state expenditures at a rate greater than incomes in the state -- and this has been going on for decades.

The "LaSalle Street Tax" -- no better way of getting brokers, banks and insurance companies to move to Indiana, Minnesota and Wisconsin. Move them out and you move out a huge chunk of income tax revenues.

Honestly, what sort of a brain trust runs this state?

Illinois is one of the deepest blue states, with the Democrats' for eons replenishing the govt. worker union trough in exchange for political power. It is the same as NY and, in particular, NYC. The bill has finally come due, and the powerless will feel the pain.