Israeli Jesuit Father David Neuhaus: The first step to peace in the Holy Land is ending the occupation 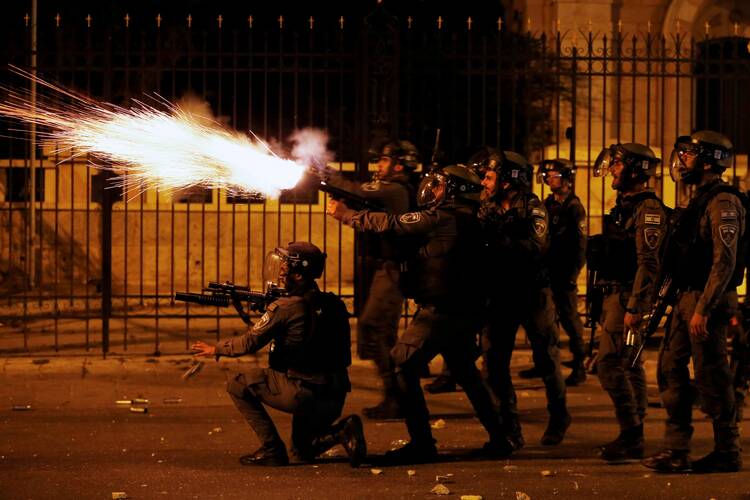 An Israeli border police member fires a weapon during an anti-Israel protest by Palestinians in Bethlehem, West Bank, May 10, 2021. The Palestinians were protesting the possible eviction of several Palestinian families from homes on land claimed by Jewish settlers in East Jerusalem. (CNS photo/Mussa Qawasma, Reuters)

Editor’s note (May 18, 2021): Escalating violence between Israel and Palestine has left at least 213 Palestinians and 12 people in Israel dead since the outbreak of hostilities on May 11.

The fighting has stopped but many vitally important questions have to be resolved in real time if another conflict is to be avoided and Israelis and Palestinians are to live together in peace. It is clear that they are not able to resolve the situation themselves; the international community will have to broker a lasting solution if the cycle of violence is to be ended and peace is to be established in the Holy Land after more than six decades of conflict.

To try to better understand the present situation after the conflict in Gaza, I contacted the Israeli Jesuit Father David Neuhaus, vicar at the Latin Patriarchate in Jerusalem for Hebrew-speaking Catholics in Israel. Father Neuhaus was born into a Jewish family in South Africa, became an Israeli citizen when he was 17 and decided to become a Catholic at age 26 after obtaining his Ph.D. in political science from the Hebrew University in Jerusalem. He lives in the Holy City and is a keen observer of events in the Holy Land.

A truce prevails between Israel and the Palestinians, at least for the moment. What are your reflections as you look back over some 50 days of the conflict in Gaza?

These were days of great sadness and deep frustration as violence raged and I was reduced to being simply an onlooker. I had the sense that our leaders manipulated us in order to whip us into a frenzy that made this war an expected and accepted outcome. Both the current Israeli leadership and Hamas seem to believe that there is something to be gained from military confrontation. Both sides speak a language of “beating the other side” by military means. The “other side” is seen as an inhuman enemy. What was particularly worrying was the almost total silencing of all critical voices. On the Israeli side, the attempt to frame all Palestinian opposition as Islamic terrorism, drawing parallels between ISIS and Hamas, playing on the worst of Israeli Jewish fears, led to a muted response to reports that hundreds of people were being killed in Gaza. The popular Israeli press was little interested in the civilian casualties and was much more interested in the tracking down and “destroying” of the “terrorists.”

Where does this leave the two peoples? Is the situation worse now than before with the sowing of greater hate and distrust?

The situation was very bad before too. This war illustrated the true ugliness that had been slightly more masked before the violence erupted into war, but the violence was there simmering under the surface. Wars transform violent thoughts and words into violent acts. These two peoples have been at war for decades; four or five generations have been teaching their children that the other side is an “enemy” to be fought. The past two generations have had almost no contact at all with the erection of the Separation Wall.

As you look ahead to the coming weeks and months what do you hope for, and what do you fear most?

My hope remains the same hope always: that God will inspire someone or some group from within to start formulating a new language whose words will create a new vision that will grab people and make them realize how much they have been manipulated in reducing the other to being simply “enemy.” Of course such voices do exist here on the margins in both societies. What we really need is a miracle whereby the new language will be heard. We need a political paradigm shift whereby our leaders, who have been speaking the same language of war for so many generations, will be replaced by those who can offer a new language and a new vision. My fear also remains the same: that our leaders will simply remain in their positions as a result of the inertia that has characterized our situation for decades.

This war illustrated the true ugliness that had been slightly more masked before the violence erupted into war, but the violence was there simmering under the surface.

What are religious leaders doing in this situation? What more could they do? What is the church doing?

Religious leaders for the most part have allowed themselves to be subordinate to the political elites who set the tone. Very few are the critical voices in the religious establishment who resist the political mobilization of religious discourse to justify the political agenda. For the most part, the “God” of the religious establishment is harnessed to the goals of this political agenda. For this reason, Pope Francis’ visit was so interesting as I think he tried to break the chains that shackle religion to politics in our context. In his visits to Bethlehem and Jerusalem, he refused to allow himself to be manipulated and invited the two political leaders he felt were the most open, Presidents Peres and Abu Mazen, to break out of violent political confrontation through a religious act of invocation.

In all of this, the church has a very important role to play. As an autonomous body (the Jewish and Muslim leadership are for the most part paid by the state whereas Christian religious leadership is not integrated into the state bureaucracy), the church can maintain an independent discourse. Her role is undoubtedly to maintain a language of sanity, a role particularly important when insanity reigns. Christians are statistically marginal, but this should not be seen only as an indication of marginality and irrelevance, but also as a strength in not having to lobby for influence and power. The church is deeply planted on both sides of the wall of enmity and is called to consciously embrace this situation and hold the faithful together.

The way out is very simple: seeing the other as a human being. Listening to him or her and letting oneself be touched by him or her. But in order to accomplish this much healing needs to take place.

Surely it was not irrelevant that the Latin parish in Gaza and the Latin parish in Beer Sheba were celebrating Mass throughout the conflict in a communion of faith. The resulting discourse is not pious escape from reality nor a diplomatic balancing act, but rather a recognition of the humanity of all those who live here, a recognition of their deep woundedness and a promotion of their basic dignity. The church is invited to describe the world from the margins: from the point of the view of the children, the women, the homeless, the oppressed…. The discourse that the church can enunciate out of her reality in this Land is possibly her greatest contribution to peace. For this she must engage herself fully in the society in which she lives and not isolate herself from it.

What is the way out of this impasse, this situation of confrontation and conflict?

The way out is very simple: seeing the other as a human being. Listening to him or her and letting oneself be touched by him or her. But in order to accomplish this much healing needs to take place. Both sides claim victimhood and the real wounds they have suffered in the past (the Jews in their history as a minority, the Palestinians in their loss of their homeland) are manipulated by a leadership that lives off these wounds. There is no doubt in my mind that a first step must be the end of Israeli occupation so that Palestinians can have a living space in which they are not surrounded and controlled. However, this is not enough to really bring us out of the impasse.

What would you like to see the church and the pope do?

The Catholic Church has a very important role: speaking out and forming consciences. Deeply aware of how the discourse of Christians about Jews in the past has had disastrous effects on the actual lives of Jews, the church must continue to formulate the ongoing revolution that has led to the birth of a new relationship with the Jewish people. Deeply aware of how the practices of the powerful throughout the centuries dispossessed peoples of their homelands and destroyed their cultures, the church must continue to formulate her solidarity with those who are the victims of occupation and dispossession. In the Holy Land, these two sensibilities are in incredible tension and the church is called to clearly formulate a vision which promotes the humanity, dignity and prosperity of both Jews and Palestinians. This clearly involves speaking out fearlessly not as a diplomat but as a prophet.