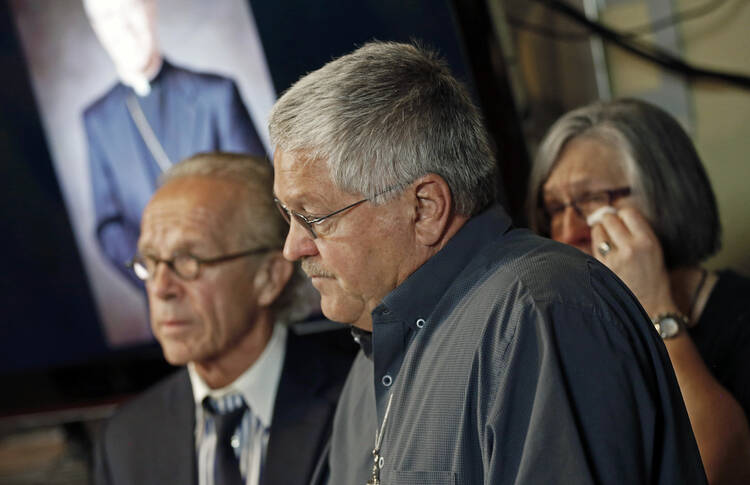 Ron Vasek, center, addresses a news conference along with his wife Patty, right, and attorney Jeff Anderson, left, on May 9, 2017 in St. Paul, Minn. Anderson announced a lawsuit against Bishop Michael Hoeppner of Crookston, Minn., accusing the bishop and diocese of concealing a report of abuse and threatening retaliation against Vasek if he went public. (AP Photo/Jim Mone)

A Minnesota man alleged Tuesday that his Catholic bishop blackmailed him, threatening to block his path to becoming a deacon and harm his son's priesthood career if he told anyone about being abused by a beloved priest decades earlier.

Ronald Vasek filed a lawsuit Monday against Bishop Michael Hoeppner and the Diocese of Crookston in northwestern Minnesota. His attorney, Jeff Anderson, said it's the first time a U.S. bishop has been sued individually for coercion.

Vasek said the 2010 threat kept him quiet for years until he was called to a meeting with Hoeppner this past March and told his pastor no longer supported his ordination. To Vasek, the reasons given made no sense, so he decided to end his silence.

His voice choked with emotion during a news conference announcing the lawsuit, Vasek said he finally told his wife, Patty, and a trusted priest, the Rev. Robert Schreiner. He said his deep faith required him to come forward.

"If I'm not ordained a deacon, at least I can be a servant to those who have been abused, in some way," Vasek said.

Vasek, 62, of Tabor, alleges that Monsignor Roger Grundhaus sexually abused him when he was 16 during a trip to Ohio.

In Minnesota, hundreds take opportunity to sue over sex abuse
Steve Karnowski - Associated Press
Hoeppner has been bishop of Crookston since 2007. The diocese issued a statement saying he "categorically denies that he in any way forced, coerced or encouraged" Vasek not to report his allegations, and that Vasek's allegations against Grundhaus were reported to law enforcement in 2011.

Grundhaus, a retired former vicar general of the diocese, told The Associated Press he had been told he couldn't talk about the lawsuit. He said he has been serving as chaplain to the nuns at Mount St. Benedict Monastery in Crookston. He said he has been suspended from public ministry until this matter is resolved.

The lawsuit, filed in Polk County District Court, says Vasek was exploring whether to become a deacon in 2010 when he told Hoeppner that Grundhaus had abused him. Vasek alleges the bishop advised him not to tell anyone. Vasek entered the program for becoming a deacon the next year. His son, the Rev. Craig Vasek, was ordained a priest in the diocese in 2010 and still works there.

Ronald Vasek alleged that the bishop summoned him to a meeting in October 2015 and handed him a letter that essentially retracted his accusations against Grundhaus and said the abuse never happened.

Vasek told reporters: "He said, 'If news of this scandal ever came out against Grundhaus, how could I ever ordain you?' He said, 'Where would I put you? Who would take you?' And he proceeded to say, 'It would be very difficult for your son, who's a priest of the diocese too.' I knew at that moment that he was blackmailing me ..."

"I signed that letter to protect my son, because I know how evil a man the bishop could be if he wanted to be," he said.

The complaint says Hoeppner "indicated that he would keep the letter in his vault in case he ever needed it."

Anderson said Grundhaus did not appear on the diocese's list of all accused priests, which was released to his firm under court order in 2015.

The lawsuit also says the bishop's alleged coercion prevented Vasek from filing a claim by last year's deadline for victims of past sexual abuse under a Minnesota law that carved out a three-year exception to the statute of limitations.

The lawsuit seeks unspecified damages in excess of $50,000, full disclosures and better protections for children and the public.

The Catholic church in Minnesota has been rocked by a broader sexual abuse scandal facing the church. The Archdiocese of St. Paul and Minneapolis, and the dioceses of Duluth and New Ulm filed for bankruptcy amid a growing number of abuse claims. Twin Cities Archbishop John Nienstedt resigned in 2015 after prosecutors filed criminal charges against the archdiocese for failing to protect children from an abusive priest.