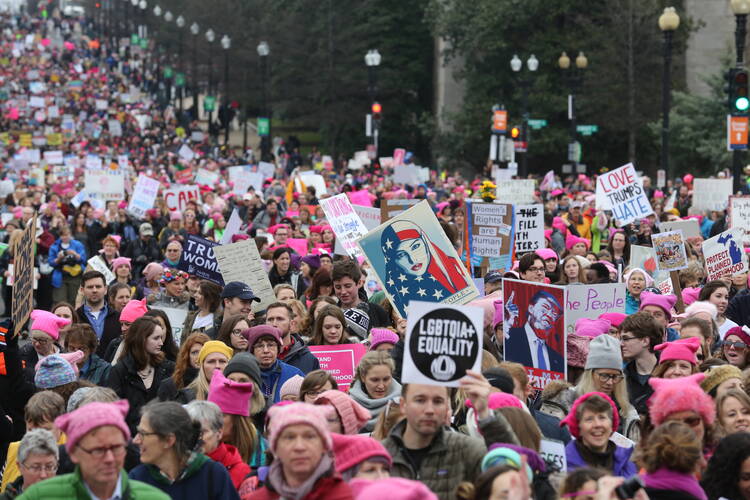 Pro-life Democrats are increasingly absent (or silent) at events such as the Women's March on Washington on Jan. 21. (CNS photo/Bob Roller)

NARAL Pro-Choice America, which lobbies against restrictions on abortion, was not pleased when a Democratic National Committee official appeared at a campaign rally last month for Heath Mello, the Democratic nominee for mayor of Omaha. (See “Democrats Stumble Over Abortion Politics in Omaha.”) The problem was that Mr. Mello had supported a Nebraska law requiring doctors to inform women considering an abortion that they could first ask for an ultrasound scan. The uproar over Mr. Mello’s mild apostasy caused Tom Perez, the chair of the D.N.C., to say that the pro-choice position “is not negotiable and should not change city by city or state by state.” Mr. Perez also said in an interview that he respected Democratic candidates with “personal beliefs” against abortion, but “if they try to legislate or govern that way, we will take them on.”

House Minority Leader Nancy Pelosi has wisely pushed back against this absolutism. “This is not a rubber-stamp party,” the California Democrat told the Washington Post on May 2. “I grew up Nancy D’Alesandro, in Baltimore, Maryland; in Little Italy; in a very devout Catholic family,” Ms. Pelosi said. “Most of those people—my family, extended family—are not pro-choice. You think I’m kicking them out of the Democratic Party?”

Ms. Pelosi’s comments about working with pro-life Democrats in the past are welcome, but they do not guarantee that candidates who do not toe NARAL’s line will receive support from the national party. And the Omaha controversy is part of a larger problem in United States politics. Abortion is not the only litmus test in the two major parties. Democrats are expected, without exception, to support same-sex marriage. Republicans are compelled to oppose any restriction on gun ownership and to fight tax increases under any circumstance.

As each party demands total obedience to its platform, its pool of potential candidates for public office shrinks.

As each party demands total obedience to its platform, its pool of potential candidates for public office shrinks. Qualified people with nuanced and complex views on public policy are overlooked; shallow opportunists who excel at parroting party orthodoxy have an advantage. Litmus tests hurt voters in another way. In every even-numbered year, there are hundreds of congressional districts and thousands of state legislative districts in which one of the two major parties essentially gives up, failing to recruit and adequately fund candidates who can appeal to the voters of those districts. The Democrats take a pass on rural districts with pro-life majorities, and the Republicans ignore districts where a majority wants to do something about gun violence. Voters (or potential voters) see elections that have already been decided for them, and they justifiably become more cynical about the political process.

Mr. Mello, a 37-year-old Catholic, had been considered a rising star in his party. Now tarred as insufficiently committed to the pro-choice side—even as he now says, “as mayor I would never do anything to restrict access to reproductive health care”—he may find it difficult to raise funds from coastal Democrats if he runs for higher office. To take another example, last year’s Democratic nominee for vice-president, Senator Tim Kaine of Virginia, is conspicuously absent from most lists of potential 2020 presidential candidates, possibly because his past support for some restrictions on abortion will make it difficult to raise a war chest.

In 2016, the Democratic Party won a single U.S. Senate seat in the Midwest. Tammy Duckworth, its successful pro-choice candidate, raised 65 percent of her campaign contributions from outside her home state of Illinois, with more than $1 million from the New York and Washington, D.C., areas and $420,000 from the pro-choice PAC Emily’s List. In contrast, the unsuccessful Democratic nominee in Louisiana, Foster Campbell (the only U.S. Senate candidate endorsed by Democrats for Life) raised only 42 percent of his contributions from out of state. For both parties, it seems like the formula for success in state and even some municipal elections is to appeal to a small base of donors in a handful of cities who demand 100 percent voting records from groups like NARAL and the National Rifle Association. The voters who actually live in a state or legislative district have less and less influence in who represents them. This is a distortion of democracy and yet another reason for voters to become disenchanted with our electoral process.

Almost everybody seems hung up on language. At least this editorial did not label the Democratic party as pro-abortion, a label a few other Catholic publications have attached to the Dems.

That said, the chair of the DNC, Tom Perez, certainly did not help Democratic Catholics to come together. His comment was Trump-like, not in content but in tone.

As a pro-life Democrat, I appreciate this article. I think the Democratic Party could become strong again, if they would relent about abortion, and not INSIST that everyone who calls themselves a Democrat be pro-choice without exception.

In the interest of avoiding another litmus test, we should recall that neither Francis nor his predecessors have advocated government support programs. Leo XIII wrote extensively about the role of civil institutions as a needed buffer between the family and the state. In “Joy of the Gospel” Francis writes extensively about the vital role of employers, of the Church community (No. 207), and about the need for “promotion of the poor which goes beyond a simple welfare mentality” (No. 204). The State has a role to play, but every pope has stressed charity, and that, “…the individual who is animated by true charity labors skillfully to discover the causes of misery, to find the means to combat it, to overcome it resolutely.” (Populorum Progressio, repeated in Caritas in Veritate). And in Populorum, Pius XII wrote extensively about the responsibility of the individual for his own advancement. The Editors are correct, and consistent with the popes, that we cannot afford to block out each other's ideas.