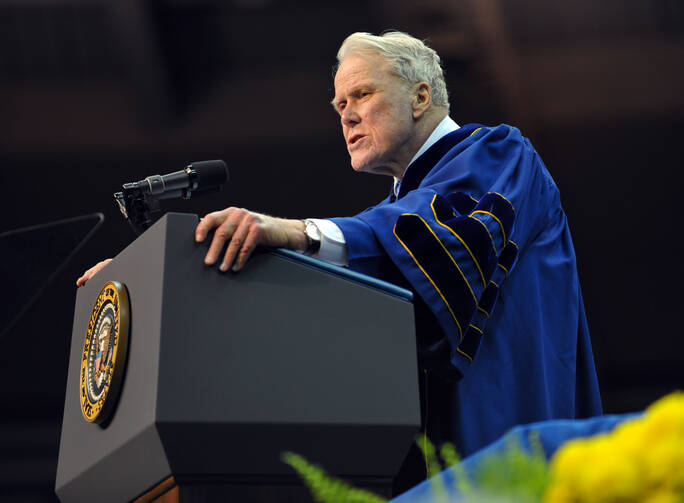 Senior Judge John T. Noonan Jr., a member of the U.S Court of Appeals for the 9th Circuit for 31 years who died April 17 at age 90, grew up in a world of privilege but always took into account the common humanity that binds people together when he decided cases, said a Boston College professor who worked as a law clerk for him.

"He recognized the law for what it was. He always looked at the person and tried to consider their situation," said Cathleen Kaveny, Darald and Juliet Libby professor of theology and law at the Jesuit-run school, who worked with Noonan at the court's San Francisco offices from 1991 to 1992.

"That was his Catholic faith, that we're all made in the image of God," she said.

Kaveny dedicated her 2016 book, "Prophecy without Contempt: Religious Rhetoric in the Public Square," to Noonan, saying he was "a model of practical reasoning and prophetic insight."

Jesuit Father David Hollenbach, Pedro Arrupe distinguished research professor in the Walsh School of Foreign Service at Georgetown University, joined Kaveny in describing the jurist as a brilliant scholar who understood history and the historic development of Catholic thought on a number of moral and ethical issues.

Noonan was a prolific writer, authoring books on topics of concern to the church such as contraception, abortion and religious freedom, as well as legal subjects. Through his writing, he contended that Catholic tradition was dynamic and changed over time to reflect new understanding.

Father Hollenbach cited Noonan's writing about the church's acceptance of slavery and torture and the gradual shift away from supporting such practices.

"His range of knowledge of the historical tradition of Christian understanding of law is unparalleled. His works ranged from his book on contraception to his major work on religious freedom. He wrote an extraordinary work on bribery and the history and attitudes on bribery in the course of Western thinking on that," Father Hollenbach said.

"One of the interesting comments he made was after writing this big book on bribery, something like 500 pages. The question he said he couldn't answer was the difference between a bribe and a political contribution," he added.

A native of Boston, Noonan began his legal career after graduating from Harvard Law School in 1954. As he became known as one of the country's foremost experts on the history of the development of Catholic thought, demand grew for Noonan to speak at universities and events across the country.

In addition to his collaboration on the 1980 historical look at bribery, Noonan wrote "Contraception: A History of its Treatment by the Catholic Theologians and Canonists" in 1965; "Power to Dissolve: Lawyers and Marriages in the Courts of the Roman Curia" in 1970; "A Private Choice: Abortion in America in the Seventies" in1981; and "The Lustre of Our Country: The American Experience of Religious Freedom" in 1998.

His book on contraception often has been cited by church observers as a factor in Blessed Paul VI's decision to appoint a commission to study the issue. Noonan served as a consultant to the commission.

Noonan also wrote dozens of articles on legal and moral and ethical topics for numerous scholarly publications and collaborated with authors and editors on other book titles.

In the court, Noonan distinguished himself as a thoughtful jurist and eminent scholar with a particular emphasis on the historical development of moral concepts, said Chief Judge Sidney R. Thomas of the 9th Circuit in a statement released by the court.

Among Noonan's most noteworthy cases was Compassion in Dying v. State of Washington, a 1995 appeal in the first federal lawsuit related to physician-assisted suicide by terminally ill patients. He sided with the majority in a 2-1 decision, writing the opinion that reversed a lower court ruling that found a state law prohibiting physician-assisted suicide unconstitutional. The decision ultimately was upheld by a unanimous U.S. Supreme Court.

Other key cases in which he wrote the court's opinion included cases revolving around racial profiling by police and police activity in monitoring criminal suspects, the death penalty and the Religious Freedom Restoration Act.

Noonan received the University of Notre Dame's prestigious Laetare Medal in 1984. Presented to American Catholics since 1883, the award is given to someone "whose genius has ennobled the arts and sciences, illustrates the ideals of the church and enriched the heritage of humanity."

Noonan began his professional career on the staff of the National Security Council under President Dwight D. Eisenhower in 1954. A year later, he began work as an attorney in Boston. In 1960, he joined the University of Notre Dame Law School faculty. In 1966, he took a position as professor of law at the University of California, Berkeley.

President Ronald Reagan nominated Noonan as a judge on U.S. Court of Appeals for the 9th Circuit, headquartered in San Francisco in 1985. He served the court for 11 years before assuming senior status in 1996. As a senior judge, he continued to hear cases and author opinions under a less rigorous schedule. His most recent opinion was published in December.

During his tenure, the court said, he heard oral arguments in 3,459 cases and written 1,080 opinions, dissents and memoranda decisions.

In 1984, he testified to the U.S. bishops drafting a pastoral letter on the economy.

A funeral Mass was to be celebrated April 22 at St. Albert's Priory in Oakland, California.