More violence should not be our response to atrocities in Syria

More violence should not be our response to atrocities in Syria 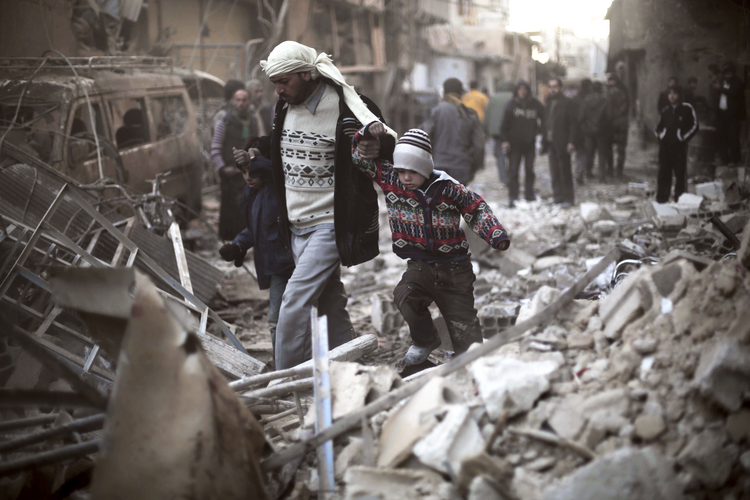 A man walks with a pair of children in hand hand through the rubble in Eastern Ghouta, Syria, in 2015 (Save the Children via AP, File)

On April 4, a chemical attack in Syria killed an estimated 100 individuals—including at least 10 children—and injured over 400 people. President Donald J. Trump, who previously argued against direct involvement in Syria, condemned these actions. On April 6, in what many are calling a surprising and confusing shift in foreign policy, he launched 59 Tomahawk cruise missiles at a Syrian airbase. This marks the first direct U.S. attack against President Bashar al-Assad.

In defense of these strikes, President Trump argued that “it is in the vital national security interest of the United States to prevent and deter the spread and use of deadly chemical weapons.” Many, however, are wondering if direct involvement in the Syrian maelstrom is the best response.

Piling violence on violence is not a strategy toward peace; it is a dangerous reflex that opens new vectors of chaos in Syria that could just prolong the suffering.

While images of the dead and injured in this part of the world may be disturbing, they should not always move policymakers to immediate action. Discernment is necessary to discover what compassion requires. Sometimes it requires attention to suffering while admitting our own powerlessness rather than a response that is not practically or morally defensible. Piling violence on violence is not a strategy toward peace; it is a dangerous reflex that opens new vectors of chaos in Syria that could just prolong and broaden the suffering.

Pope Francis denounces 'massacre' in Syria, appeals for end to war
Gerard O’Connell
There is no clear solution in Syria. In a joint statement released a day after the chemical attack, Cardinal Daniel N. DiNardo and Bishop Oscar Cantú condemned these attacks and suggested a starting point. They urged “the United States to work tirelessly with other governments to obtain a ceasefire, initiate serious negotiations, provide impartial humanitarian assistance, and encourage efforts to build an inclusive society in Syria that protects the rights of all its citizens, including Christians and other minorities.” The bishops reiterated the words of Pope Francis, reminding us that while there is no easy solution in this part of the world, it is our duty as Christians to focus on “a peace based on dialogue and negotiation, for the good of the entire Syrian people.”
Show Comments (
2
)
Comments are automatically closed two weeks after an article's initial publication. See our comments policy for more.
JR Cosgrove
3 years 4 months ago

Trump's missle raid on Syria was token. It was made on one military air base and only after warning that it was coming. This is hardly a minor let alone a major military intervention. It was more of a warning than anything.

Maybe the editors should be interested in the fake story on Russian intervention into the 2016 election which may have prevented a dialogue with Russia. Before this "fake news" story took off it looked like there could be a detente with Russia. Since then Russia has been the number one enemy in the News.

Sometimes violence is the only answer to violence. Weakness is often the encourager of violence at the beginning so that even more violence later on is needed. Look at Mosul. Look at what passivity or weaknesses brought there. Are the editors against what is being done in Mosul.

The lesson learned is that we should not ever repeat the foreign policy principles of the Obama administration. This reminds me of the old peace song refrain, "When will then ever learn?" Ironic and sad.

As the previous comment proves, a significant part of the nation's public psyche is the belief that violence, that punishment, that reckoning is what makes the USA great, a world leader, a superpower. It is quite revealing in current public surveys that so many Trump voters who believed in his "America first" policy nonetheless liked the Syria bombing as a sort of notice to the world that the USA was asserting once again its hegemony over the world stage.

No one, not the previous administrations nor Trump's, has figured out how to deal with rogue nations that engage in travesties of justice. Certainly the structure of the United Nations proves that it cannot deal with war crimes. The only point that the bombing of a Syrian airport proves is that we can bomb a Syrian airport. While it might deter the use of more chemical weapons, the ongoing destruction of the Syrian people by Assad continues with the ordinary means of war, no less hideous and a war crime. For that we have no solution.

This article also appeared in print, under the headline “More violence should not be our response to atrocities in Syria,” in the May 1, 2017, issue.