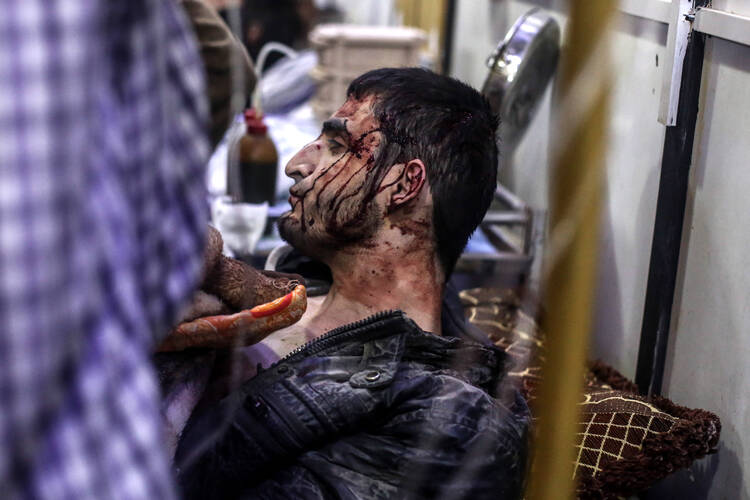 Pope Francis today denounced the horrific “massacre” in northwestern Syria, on April 4, allegedly due to the use of chemical weapons, that killed an estimated 100 persons and injured 400, including many children, and appealed yet again to those with “political responsibility” at both the national and international levels, to bring an end to this “tragedy” and bring relief to the population that is suffering from a war now in its sixth year.

“We are horrified at the latest events in Syria,” Francis said at the end of the public audience in St. Peter’s Square on April 5. He did not use the words “chemical arms attack,” as the international media have done, attributing it to the Syrian regime, though the latter denies that chemical weapons were used. It was the third claim of a chemical attack in Syria over the past week. 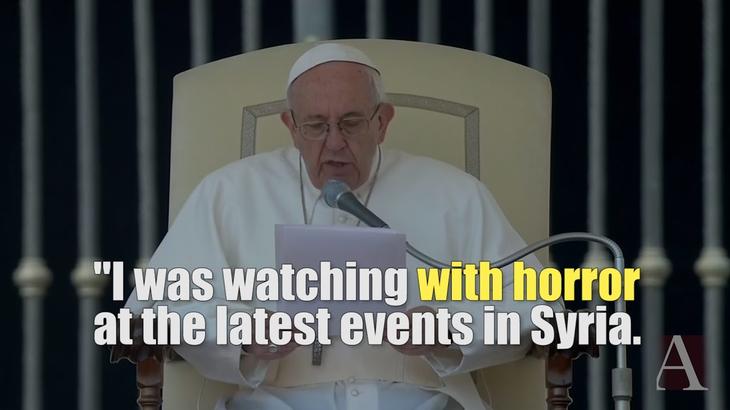 Italian media report that Sarin—a nerve gas that goes back to World War II but was banned internationally in 1993—was used in yesterday’s attack by the forces of the Assad regime against the rebels in this area. The gas was last used near Damascus in 2013, but an agreement was brokered by the United States and Russia that chemical weapons would no longer be used in this war. If indeed such weapons were used yesterday it could scuttle the efforts at the United Nations to end the war .

Pope Francis appeals “to the consciences of all those who have political responsibility, at national and international levels... [to] stop this tragedy."

Pope Francis “firmly deplored the unacceptable massacre” that took place the previous day in a town—near Khan Sheikhoun in the province of Idlib, northwestern Syria, on the border with Turkey—that caused the deaths of perhaps as many as 100 people, “among them many children.” He said he “is praying for the victims and their families.”

He then appealed “to the consciences of all those who have political responsibility, at national and international levels, so that they stop this tragedy and bring relief to that dear population that has been wracked by war for too long a time.” According to various sources including the UN, an estimated 400,000 people have been killed so far in this war, including at least 17,000 children.

Francis offered his “encouragement” to efforts of all those who, “notwithstanding insecurity and difficulty,” are trying to bring help to the inhabitants of that region.

Also, today, Pope Francis denounced the “grave attack” when a bomb exploded on a metro-train earlier this week in St. Petersburg, Russia, that led to the deaths of 14 persons and injured 50 others. Local media say the bomber was a Russian citizen from Kyrgyzstan, in Central Asia, whose motives are not yet clear.

The pope said he “entrusted all those who tragically died (in that attack) to the mercy of God” and expressed his “spiritual closeness to their families and to all those that suffer because of this dramatic event.”

I must admit I lost interest in Papal appeals when Pope Francis spoke before the US Congress, the richest and most powerful legislative body in the world, and asked for nothing specific, and announced nothing specific of his own.

The Pope gave an eloquent sermon about general principle. The politicians got to bask in the rosy glow of the Pope's words in front of the cameras. Then everyone went home. Nothing accomplished for the needy. Empty exercise.

What's weird is that American Catholics have a great accomplishment in Catholic Charities, which they are only very rarely interested in discussing. Baffling...

Why would the Assad regime use chemical weapons against civilians when it advances towards victory against Obama/Hillary's "moderate" head-choppers and against open terrorists ISIS/al-Qaeda?

Can we resist the thrust of the MSM to escalate the war en Syria, as they seek revenge against Putin and his allies, repeating talking points without bothering to show long-pending evidence for their claims?

If Trump falls for the trap, the neocons would be back in charge after being electorally decimated by the Republican base. Professional warmongers and hypocritical humanitarian bombers have united to destabilize once again the Middle East.

Gentlemen what is America Magazine's interpretation of the Pope's call to those
...." who have political responsibility, at national and international levels,...to stop this tragedy.... and bring relief to ...to a population wracked by war...."

Is this a call for the type of "just War" Francis referenced a few years ago when he asked for the world to stop the slaughter of Christians in the Middle East.

I would like to know the Editorial Board's position, thoughts, interpretation of what the Pope means.
Clearly all diplomatic efforts have failed; and over the course of some 4-5 years 400,000 civilians have died.

I sincerely hope your question receives a response. Exactly what is being requested? I think that all rational people agree that the actions in Syria are an abomination to humanity. But what recourse is being demanded?

Please see my earlier request for The Editors to state their interpretation of the Pope's call for action by those "....with political responsibility ...at international levels so that they stop this tragedy"

Since to date no response has been forthcoming, I add to that request:
Is the American drone strike on the Syrian airbase an acceptable response to this Papal appeal.?

I have had the feeling that the Pope's plea as stated in this article is going acquire a certain "Delphic Status".
I await The Editors Response to my initial question and this additional inquiry.

8 days later and still no response. As a group you seem to have the time to comment on all sorts of political, climatological and other areas where you have little if any expertise. Now in an area clearly within your province...The meaning of a Papal Statement......still no response???