Why more than 4,000 religious leaders are writing President Trump and Congress

Why more than 4,000 religious leaders are writing President Trump and Congress 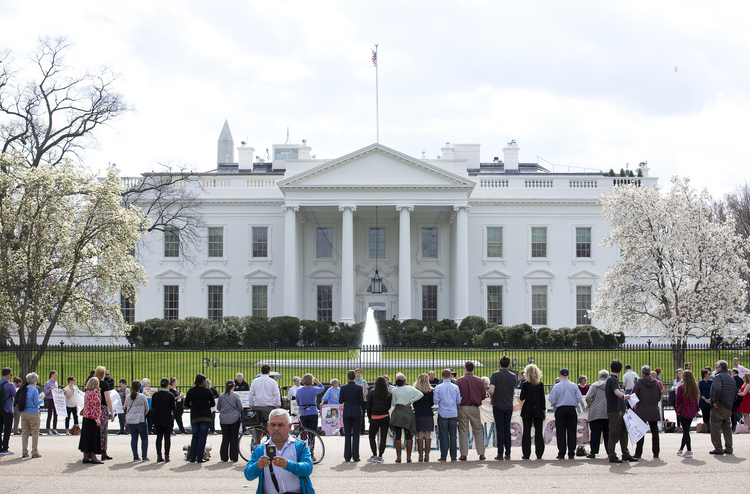 Peace activists gather for an Ash Wednesday prayer service outside the White House in Washington on March 1. (CNS photo/Tyler Orsburn)

A group of more than 4,000 religious sisters and clergy, including priests, brothers and deacons, sent a letter to every U.S. senator, member of Congress and President Donald Trump voicing support for the refugee resettlement program.

"Our nation has long prided itself on providing refugee families an opportunity to start a new life and the chance to contribute to the continued flourishing of our country. Now, when the need is so great, is not the time to waver in our commitment to this tradition of welcome," said the letter dated on March 27 and released by the Franciscan Action Network in Washington.

Through executive action, Trump has sought to suspend the refugee resettlement program as part of a temporary travel ban affecting some majority-Muslim countries. Different federal judges have temporarily halted the ban, even after revisions were made to it, and asked for an extension in March to keep it from going into effect saying that it discriminates based on religion.

Even as the future of the executive order is decided, Catholic agencies and organizations that work with refugee resettlement or advocate for refugees, are bracing for what could happen should the ban be upheld.

Quoting the Bible verse Matthew 25, and pointing to the teachings of Jesus, the letter cites the Catholic tradition of welcoming the stranger.

"As leaders in the church, we are deeply committed to Jesus' teaching to welcome the stranger and to protect those who are marginalized and vulnerable. With some 65 million people worldwide displaced from their homes due to war and other forms of violence, the United States has a moral responsibility to remain a safe haven for children, women, and men fleeing persecution and possible death," the letter says.

Quoting the Bible verse Matthew 25, and pointing to the teachings of Jesus, the letter cites the Catholic tradition of welcoming the stranger.

The country already has a strict vetting process in place for refugees and because the Catholic Church in the U.S. is concerned with the persecution of religious minorities, the signers say they reject "any proposal to prioritize refugees of certain religions over others."

The website for the Office of Refugee Resettlement says Congress "enacted the first refugee legislation in 1948 following the admission of more than 250,000 displaced Europeans" and later provided admission of an additional 400,000 displaced because of world conflict.

Subsequent waves of refugees have come from Hungary, Poland, Yugoslavia, Korea and China, Cuba, the Soviet Union, and Central America.

The first executive order president Trump signed just days after his inauguration put the refugee resettlement program on suspension for 120 days and gave priority to some religious minorities over others. It also allowed for just 50,000 refugees to be resettled in the United States in the 2017 fiscal year compared to 110,000 the previous year.